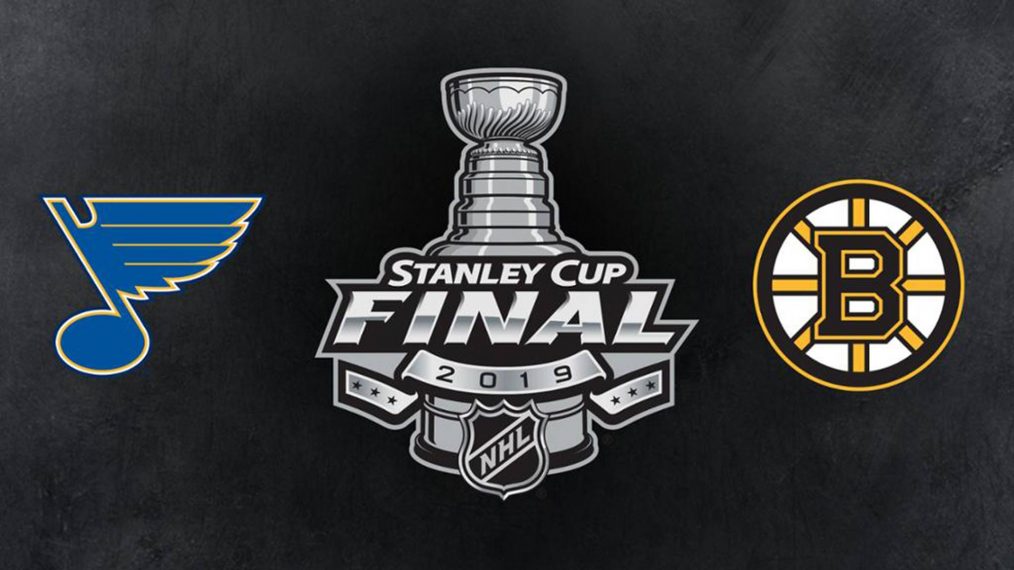 A Stanley Cup Final rematch 49 years in the making will see the St. Louis Blues vie for their first-ever title against the six-time Cup champion Boston Bruins. The Bruins return to the Final for the third time in the last nine postseasons, while the Blues end a 49-year drought with their first appearance since 1970. 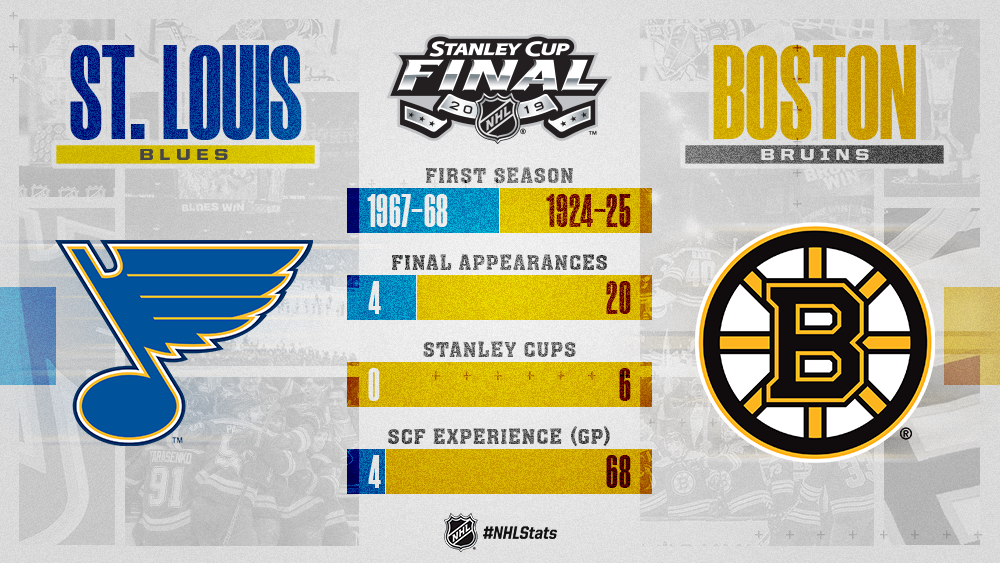 * The Bruins (107 points; No. 3 in NHL) and Blues (99 points; No. 12 in NHL) finished eight points apart in 2018-19. This year marks the fifth Final since 2014 between teams separated by eight or fewer standings points. The only outlier in that span was the 2017 Final between the Penguins and Predators, who were separated by 17 points.

* The Blues are the 10th team to reach the Final after ranking 12th place or lower during the regular season. Six of those instances have come since 2006, including three under the current playoff format.

* St. Louis climbed from last place through games played Jan. 2 to finish 12th in the overall NHL standings after posting the League’s best record from Jan. 3 onward – vying for the Central Division title on the final day of the regular-season. In the weeks since they have become the first team in the expansion era (since 1967-68) to win a playoff round after ranking last overall at any point after New Year’s Day (min. 20 GP).

LOOKING BACK ON THE FIRST THREE ROUNDS 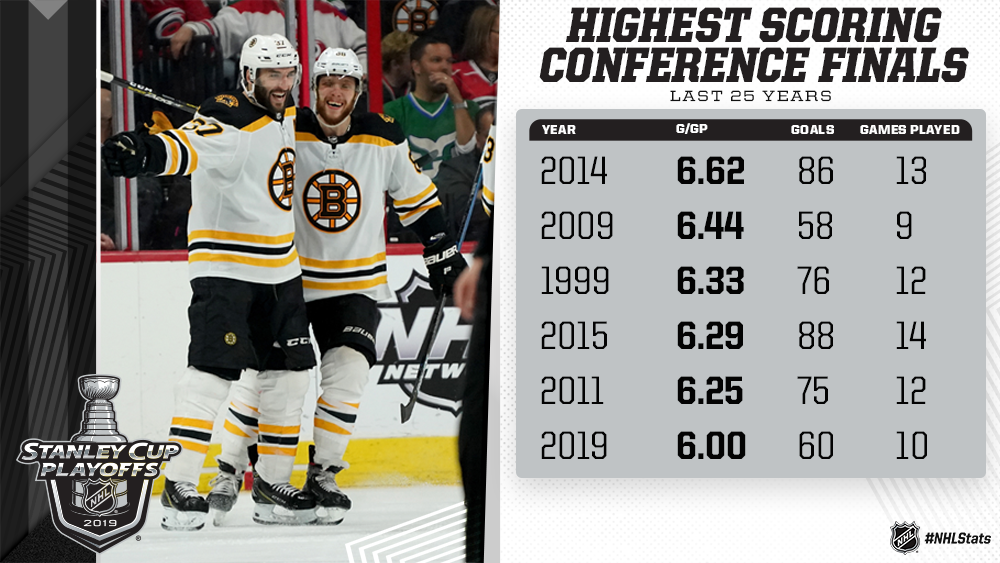 * While St. Louis used hot starts to set the tone, Boston boasted a perfect 11-0 mark when leading after two periods in the opening three rounds (St. Louis was 8-1).

* Overall, teams that lead after 40 minutes are 53-9 in the 2019 Stanley Cup Playoffs (8-2 in Conference Finals). St. Louis (2) and Boston (1) are responsible for three of the nine times a team won when trailing after two periods: the Blues rallied in Games 1 and 5 versus the Jets, while the Bruins did so in Game 1 against the Hurricanes.

Each Stanley Cup Finalist had a different player lead the team in scoring in the first three rounds:

* Bruins scoring leader Brad Marchand collected nine points in seven games against the Maple Leafs (4-5—9), the most points in one round this postseason by any player in the 2019 Final. Marchand was held off the score sheet in Game 3 and 5 against Toronto but recorded three points in Game 4 and 6; he became the first Bruins player since 2011 (Michael Ryder) to bounce back from scoreless outings with at least three points multiple times in a postseason.

* Blues captain Alex Pietrangelo led the Blues with 0-6—6 in six games against the Jets, becoming the second St. Louis defenseman ever to lead his team in scoring in a series victory. Al MacInnis paced the club with 3-6—9 in the team’s seven-game series victory versus the Coyotes in the 1999 Conference Quarterfinals.

* Blues scoring leader Jaden Schwartz tallied six points in the seven-game showdown against the Stars (4-2—6). Schwartz has since become the third player in NHL history to reach the 10-goal mark in the regular season and eclipse his goal total in the ensuing Stanley Cup Playoffs, joining Claude Lemieux (1996-97: 11 G in regular season, 13 G in playoffs) and Marian Gaborik (2013-14: 11 G in regular season, 14 G in playoffs). Skating with the Avalanche and Kings, respectively, Lemieux (45 GP) and Gaborik (41 GP) played significantly fewer regular-season games than Schwartz (69 GP) in those campaigns.

* Bruins forwards David Pastrnak (4-1—5) and David Krejci (2-3—5) collected five points apiece over six games against the Blue Jackets. Pastrnak, who will celebrate his 23rd birthday Saturday, now has 147 career goals (including regular season), the most by a Bruins player before age 23. Ten years his senior, Krejci has continued his consistent postseason play with a point in all but four games in 2019 (4-10—14 in 17 GP).

* Blues forward Vladimir Tarasenko takes a six-game point streak into the Stanley Cup Final after notching at least one point in every game against the Sharks, pacing all players with 3-5—8. He became the first player in franchise history to find the score sheet in every game of a series that required at least six contests.