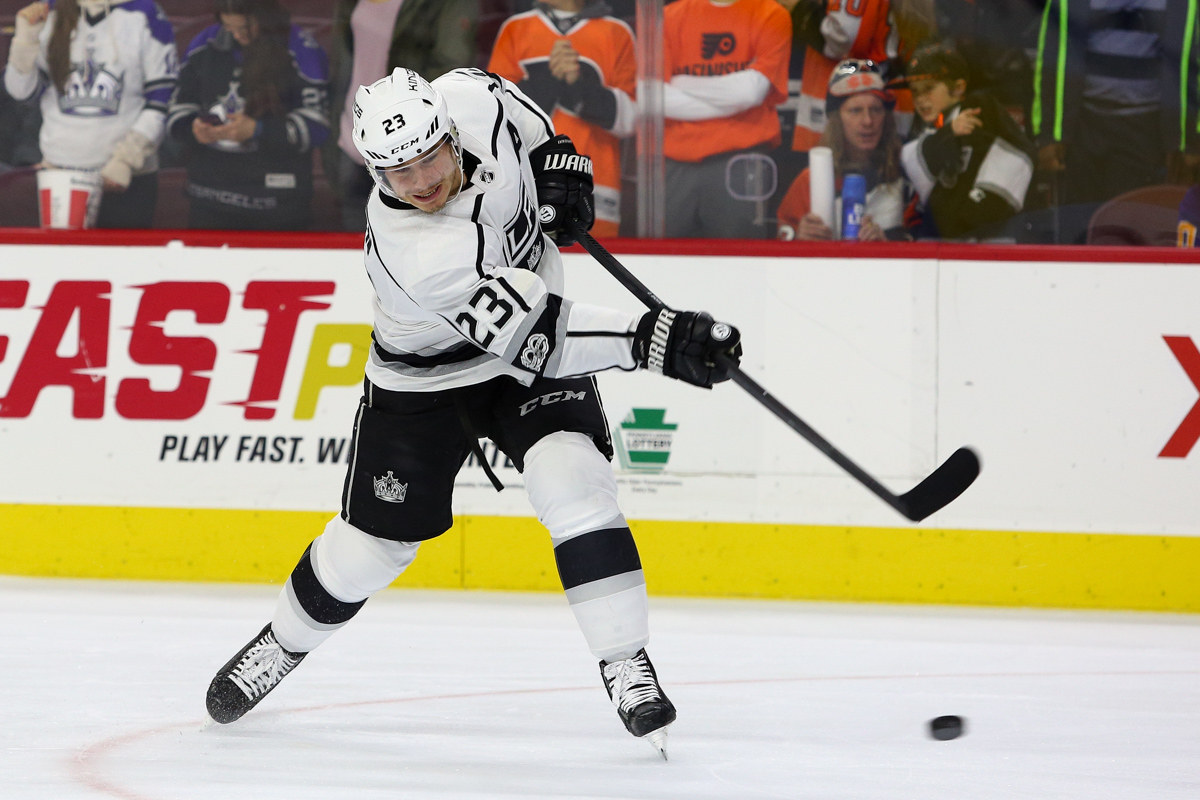 Playing for nothing. It’s not just the fate of the non-playoff team. It’s also what haunts the mind of the teams that have clinched but who could move up or down the standings pending the outcome of the last regular-season games. That’s the case for the LA Kings. They don’t necessarily want to tempt fate and hope to play one certain team (Vegas). Rather, they have to wait and see what happens. Will it be Vegas (now that’s a real wildcard—you just don’t know what you’ll get)? Anaheim (might be fun)? San Jose (should win, but don’t say that, don’t ever say that)?

No matter who it is, they’re still supposed to want to win, right? Sometimes, not so much. Like Thursday with the Wild in town. The Kings were down 2-1 with 5:02 gone and six shots having been fired. Irony—they had gone up 1-0 with less than a minute gone. And the two following goals, by the Wild, were so fast that they happened before the earlier goal announcements had been made.

All the goals, on either side, were kind of fluky. The first, by LA, was a wrister from the point that was tipped in front. OK, that’s skill. It was Dustin Brown’s 25th of the year.

The second, the Wild’s first, was another wrister from the point. It was touched in front, perhaps by the leg of the Kings’ defender Folin, who had had the wrister that Brown tipped in.

The third was a puck back to the point that Dumba swatted at. It flew to the net at an odd speed and found its way down and right between Quick’s knees just at the precise instant before he closed the five-hole. Six shots. Two goals. And a lead let go.

The only other notable moment in the first was a funny bounce off a backhand dump-in by Kyle Clifford. The puck took an odd hop and almost fooled Alex Stalock. At least they had a pie-eating contest at the period break, instead of some of the other contests that are run.

The first period ended with the Wild on a power play (Kopitar for slashing), which saw the Kings get two long clears but then had the visitors pounding away in the last fifteen seconds, registering at least two good chances. The shots in the period ended up 10-7 for Minnesota.

On the Kings’ third goal, scored late in the second period, newcomer Daniel Brickley (on whom more below) notched his first NHL point, an assist. The puck had gone from Carter to the net on a quick shot. Leg save. The rebound came out to Toffoli, who carried it out around the net. He put it to the point. Brickley grabbed it, took a quick look over, and passed it D to D to Folin. He spotted Tobias Reider to the left part of the slot, and shot-passed it over. Rieder deflected it past Stalock.

After the goal, there was a break. Jonathan Quick came to the bench. He reached out with his blocker hand and gave Brickley a rub on the helmet.

Then he went out and made an explosive save. But that was about the only one of the period, because the Kings mostly took over. They had the advantage of three power plays, including 1:19 of potential five-on-three (they scored after about thirty seconds) and they took it. Brown scored at 7:42 to tie the game. Later on, as said above, Rieder made it 3-2. The Wild launched just four shots in the frame. The Kings had 14.

But something else good happened. Dustin Brown got a hat trick. It came with 49.3 seconds left in period two. He flung a puck to the net from just inside the blueline. It probably glanced off the skate of defender Jonas Brodin, who had gone to a knee in the sideways position for the block. When you’re hot, you better shoot the puck. Lots of people threw hats. Those who follow Eddie and Doug on the Puck Podcast got ready to throw their pants. (Look up “Pants Trick” on your favorite googlizer and you’ll see what I’m talking about.) Charles Smith in the press box refused to throw the one he had bought earlier in the evening.

But remember what I said earlier about nobody in particular really wanting to win this game? The Kings gave two goals back in the third period. The first came on a pass-around play that finally went from Dumba to the waiting stick of Eric Staal, who did a one-timer redirect that Quick had no chance on.

The goal that knotted it came on the power play. For the Kings. Minnesota went down two-on-one and for whatever reason, the Kings Martinez backed way off of Prosser, who simply launched a wrist shot to the top far corner of the net over Quick’s glove. 4-4, and the shots now at 23-23.

The game played out with the usual on-scoreboard features (kiss cam), the same old songs (Living on a Prayer), and finally, another goal.

It was in OT, and it gave Dustin Brown his first four-goal game. He said all the clichéd things about the game in the dressing room afterwards. Until . . .  the end, when he came up with some gems.

“I think it was the more important thing that I could help the team.”

“It’s up to the secondary guys like me, to push.”

“Nice to do it to try to climb in the standings, which is the most important thing, climbing.”

“Heroics every night are something we need to avoid. Next week.” In the playoffs, in other words.

Yawn. It got better.

When asked if he’d ever had a game at any level, he said, “I mean, it depends upon what you deem a level. Like, I actually, you know what, think I did have one in the OHL. Maybe. I’d have to look. But I don’t count Pee Wee, because, it’s Pee Wee.”

And even more: “It’s funny. I actually practice that, exact shot, I think it might be the first time I got it in my career, but I practice it every day. I want to be, just the way the play developed, I just stayed away from the net. We had a quick little advantage there, Kopi just, pretty good passer, so (typical Brown look inserted here, and end of sentence, at least end of words. The look said a lot).”

Coach John Stevens was complimentary as he told about how he had motivated Brown. “Not just because of the four goals, but that’s as good as Brownie’s played in a long time. What I loved about the last goal is that he did it from checking. He got in there and knocked a guy off the puck like we’ve seen him do so many times, then he got himself open.”

“I thought his game was trending in the right direction last year, and I told him ‘if you’re not a twenty goal-scorer—again—then I don’t know what I’m doing. He kind of laughed, but he believes he is too, and he is.” These goals increased his total for the season to 28.

The Kings had one newbie on defense. Daniel Brickley, late of Minnesota State University, was making his NHL debut. He signed a two-year entry-level contract on March 30th. He earned 35 points and thus tied for fifth amongst NCAA Dmen. Twenty-five of his points were assists. He had 53 PIMs this year. Hmmm. No fighting in college hockey. What’s he doing out there to get all those penalties? His career points totals at Minne State were 20-57-77 in 107 games (three seasons).

Why bring him up now? Well, the team has two left-shot defensemen (Muzzin and Forbort) hurt, and, to cycle around to where this started, they don’t really, honestly have to play their peak game right now. Tune-up for the playoffs notwithstanding, all winning (or losing) does is scramble the eggs a bit, and with the way everyone in the West seems to lose when they should win and win when they should lose, it doesn’t really matter. You get who you get.

There was also the fact that the Kings had LaDue out with the flu, giving Brickley his chance. He did well, and Coach Stevens was happy with his play after. “We’re fortunate we had the Brickley boy here, and he got into a game which was great.”

He added, “it’s good. It’s a tough situation to come into. . . . He’s got good poise with the puck, some escapability with the puck. I think you saw that. And it’s probably, he’ll tell you it’s a good reference point for him to get into the league at this time of year. He’s a big kid, but guys are big in this league, and they’ve got some big forwards. . . . He come in and played with confidence.”

The Kings now face the Dallas Stars at home to round out their regular season. The Wild head up to San Jose.

For a full story on Brickley, see www.frozenroyalty.net. Gann Matsuda covers the Kings thoroughly there.