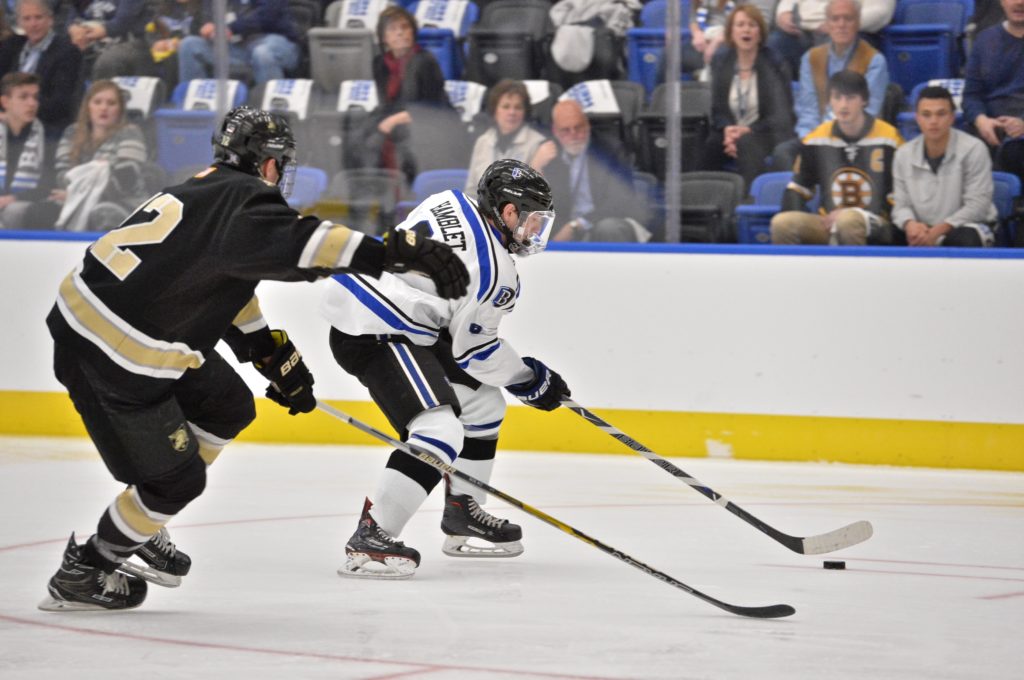 Hanover, NH — The Brown Bears have struggled for offense all season. They entered the Ledyard Classic in the bottom-10 of the nation for goals scored. They only totaled 14 shots the day prior against long-time rival Providence. However, on Saturday afternoon, Brendan Whittet’s squad found the offensive spark needed to beat a strong Army black Knights team in the Ledyard Classic Consotlation game.

Army actually got the first blast, when Taylor Maruya tipped in a Dalton MacAfee shot for a Black Knight lead. Brown evened the pace with some strong offensive shifts and was rewarded with two goals in the frame. First, Joachim Weberg potted a perfect Chris Berger pass to tie the game. Then in the late minutes of the frame, Trey Dodd buried his first goal of the season to claim the first Brown lead of the weekend before intermission.

The Black Knights again got the jump in the second, despite being outplayed for much of it. Near the mid-point of the frame, Daniel Haider drove up the left boards and pinballed a shot through Brown goalie Gavin Nieto. Army sophomore goalie Jared Dempsey recorded 13 of his 29 saves in the second but was not perfect. Anea Ferrario flipped a backhander through traffic that found space under Dempsey and Brown again led at the intermission.

The young Bears committed two penalties early in the final frame. Tommy Marchin’s slashing call did not burn them, but Colin Burton’s boarding minor did. Army moved the puck perfectly through the offensive zone and Brendan Soucie scored his second goal of the weekend to tie the game. Whittet needed his team to respond. Fortunately, they got their chance and pounced.

Matt Berkovitz, the only NHL draft pick on the Army roster, took a hooking penalty. On the ensuing power play, Brown’s best players made their best play of the season. Max Gottlieb fired a pass to Tommy Marchin, who ripped a wrister on net. Jared dempsey saved it but bounced the rebound to Zach Giuttari. The Bear’s alternate captain from Warwick, RI, did not miss. Brown hemmed Army in their own zone late in the frame and ended proceedings with a Brent Beaudoin empty-netter from the red-line for a 5-3 final.

Army Head Coach Brian Riley was disappointed with the ending of the game.

“We were down to four D at the end of the game,” Riley said. “One of our D took a penalty late and we had to put a forward out there who’s never played there. I thought we were better tonight than we were last night, but it’s not about being better, it’s about winning games.”

The Black Knights fall to 8-10-1 on the season. They travel to Troy, NY, next weekend for a matchup with the RPI Engineers. Puck drops at the Houston Fieldhouse at 7 pm on January 5th. They return to Atlantic Hockey play the following weekend with the headliner matchup with archrival Air Force. Puck drops at the Cadet Ice Arena in Colorado Springs at 9:05 ET/7:05 MT on January 11th and 7:05 ET/5:05 MT on January 12th.

“I think it’s a good lesson,” Whittet said. “We have to learn to be able to play and not to deviate from what we did to get that lead. But I did like the way we responded. Hopefully, it’s a confidence thing and we can build off that.”

The Bears improve to 3-7-3. They travel to Pittsburgh, PA, to participate in the Three Rivers Classic next weekend. They’ll face Robert Morris on Friday night and either St. Cloud State or Union the second day. Puck drop against the Colonials is scheduled for 7:30 at the Consol Energy Center.