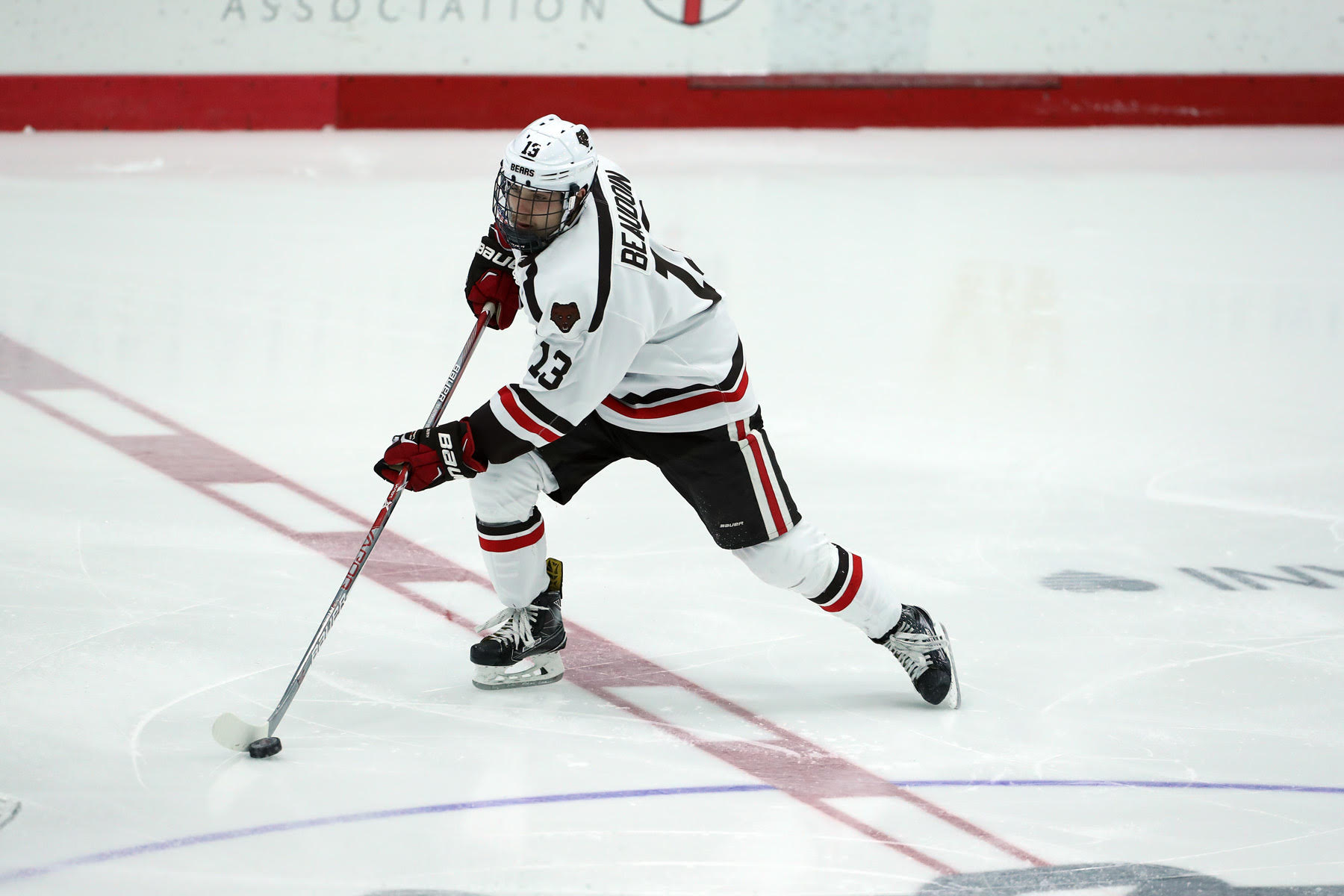 Providence, RI — When the regular season ended, Brown emerged with home ice to open the ECAC Tournament for the first time since 2013. However, few expected great success from the Bears. They hadn’t won a playoff series, let alone a playoff game, in six seasons. They also were matched up against the ever-dangerous Princeton Tigers; the reigning Conference champions and winners of a 5-1 regular season-ending romp at Meehan Auditorium on March 2nd.

Brown flipped the script for a 3-0 Friday night win and regrouped for a potential series win. Princeton answered with all they had, and the teams staged a game destined for memory in college hockey lore.

The first period was even for the first half but tilted to Brown with two quick strikes. Justin Jallen broke the ice and Brady Schoo doubled the lead 30 seconds later to give Brown a 2-0 lead. Princeton offered resistance when Alex Riche redirected a power-play shot through Gavin Nieto for a 2-1 Brown lead before the intermission.

Princeton dictated the pace for much of the second with a 10-5 shot advantage. They were rewarded when Ryan Kuffner potted a backhander over Gavin Nieto to tie the game 11:43 into the frame. Ryan Ferland departed and Jeremie Forget replaced him, with strong results. Not many pucks came his way in the 2nd, but he stopped everything and helped the Tigers stayed tied into the second intermission.

The game entered remarkable air in the third period. Brown claimed the early momentum when Captain Tommy Marchin tipped in a Tony Stillwell blast 1:11 into the third. Ten minutes later, Colin Burston joined in on the fun to make it 4-2 after a horrendous Princeton turnover. Then, with just 4:37 left, Brown sounded a possible death knell for their guests. Brady Schoo scored to make the game 5-2 in the final minutes of the third.

Princeton had other ideas. Tiger Head Coach Ron Fogarty pulled Forget for an extra attacker and was rewarded quickly. Only 1:01 after surrendering the 5-2 goal, Alex Riche potted his second goal of the night to spark some life. Ryan Kuffner followed shortly thereafter with his second to scare the assembled fans. Then the Bear’s worst nightmare hit. Jackson Cressey found space on the back door and buried the chance with 48.5 seconds left to tie the game 5-5. Each team got some nice chances in the dying seconds, but none were capitalized on. The game entered overtime.

In the extra session, the game turned from a hard-fought playoff game to something more incredible. Both teams upped their intensity and had chances. Brown hit two posts. Ryan Ferland reentered the game for Princeton in net and was heroic, stopping Tommy Marchin in tight for the winner. Max Veronneau and Ryan Kuffner both had scary changes to win. Alex Riche had a breakaway that Gavin Nieto stonewalled. Both combatants gave the game all they had and needed two full overtime sessions and even a third. Finally, Brown found a break and capped a magical night for their program.

Brent Beaudoin and Alex Brink gained the zone. Beaudoin fed the puck over to Brink and the senior from Hamilton, NY, capped off the 18th longest game in NCAA D1 Men’s Hockey history. The refs spent a long time reviewing the play for a potential offside, but they decided to not reverse the call. Brown emerged with a 6-5 win in the longest game either program had ever played.

Princeton was devastated after their championship run came to an end. “The guys are upset and crying” commented a defeated Head Coach Ron Fogarty. “Tough to see the senior group go. It is a great senior class and they’ll be missed for years to come. But I know they’re gonna have great careers.”

“I give our guys a lot of credit because that was the craziest ending to a regulation I’ve seen in all my years of coaching and playing” commented a beaming Brendan Whittet. “It would be very easy to fold. I thought we played some of our best hockey in the Overtimes. When you get that deep into overtime, it’s a lucky break. I felt we did a good job of creating.”

The Bears move on to the ECAC Quarterfinals for the first time since 2013. They will face either Quinnipiac or Cornell on the road next weekend. They await the result of Dartmouth and St. Lawrence’s game three results to find out where they travel.