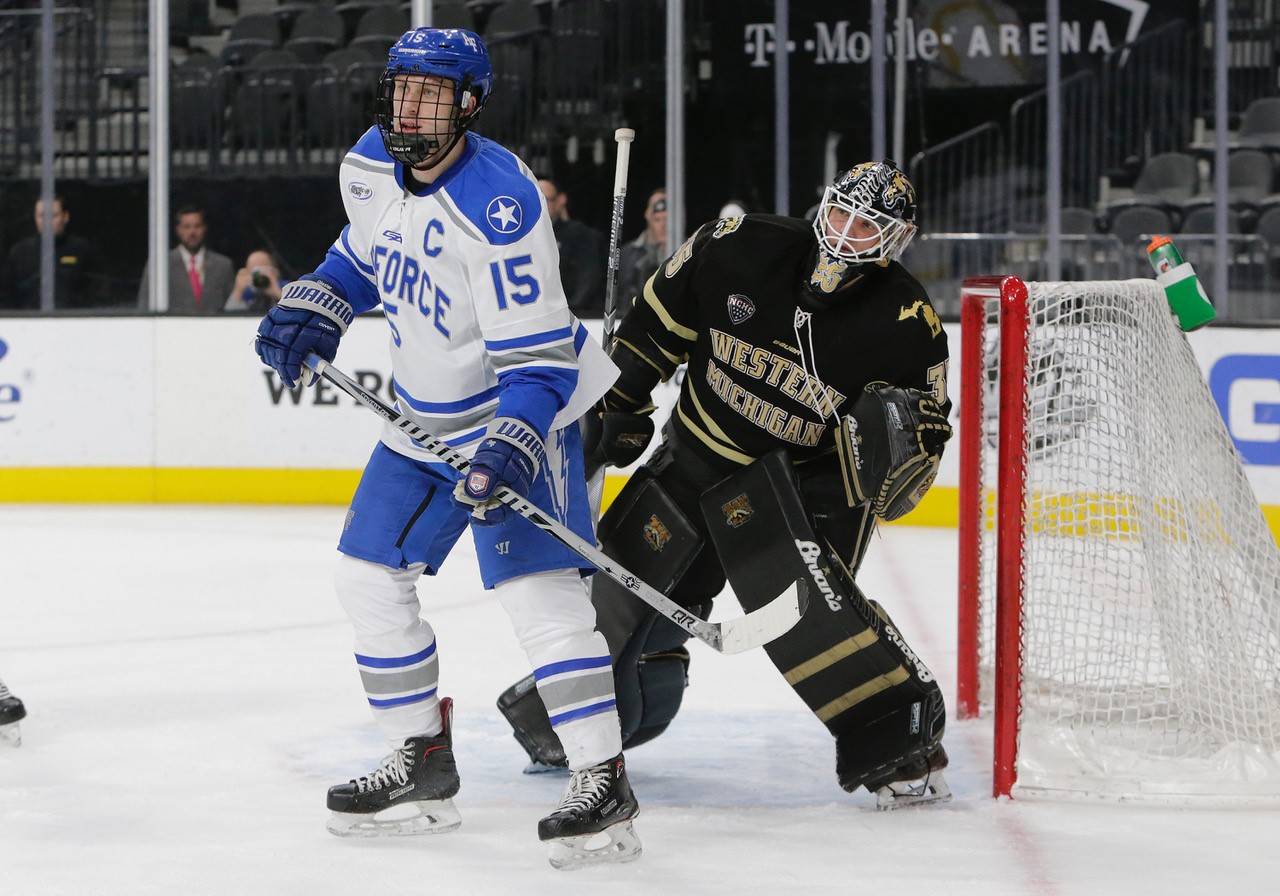 Las Vegas, NV- Two seasons ago, the Western Michigan Broncos and Air Force Falcons met in Providence for the 2017 NCAA Eastern Regional. The Falcons rode a surprisingly hot offense to an upset over the Broncos. In the time since, Air Force continued Atlantic Hockey superiority while Western Michigan regressed in 2018 before reverting to Tournament form this season. Each team blew out their first opponent and set up a meeting on Saturday night that lived up to expectations.

Western completely dominated the opening frame, winning the shots 15-7 and rarely allowed any clean chances on Trevor Gorsuch. Air Force mostly killed the Bronco chances, but yielded one tally late in the frame. Luke Bafia took a puck to the high slot and layered a beautiful shot through Billy Christopoulos for a 1-0 lead ahead of the break.

Andy Murray’s squad poured on the offensive push, outshooting the Falcons 19-11 and a beautiful demonstration of college hockey’s speed and skill. Early in the frame, the Broncos struck when Ethen Frank sliced beautifully through the Falcons for his 2nd goal of the weekend.

Western had a chance for the kill shot when Carter Ekberg took two minors within five minutes of each other and Matt Pulver served a slashing minor of his own, allowing a five-on-three sequence. Christopoulos, the Falcon’s senior goalie from Raleigh, NC, killed the penalties and kept his squad afloat till the offense could strike. Nearing the period’s end, Western committed a plethora of penalties. Jamie Rome took a tripping minor and a miscommunication resulted in a too-many-men-on-the-ice Penalty. In the five seconds of five-on-three, Matt Koch wrister a shot towards the net, where it caught Luke Bafia’s skate and found twine. Air Force controlled the remainder of the frame, but did not beat Gorsuch before the second buzzer.

The third period had the lowest shot total of the night, but also some of the best action. Air Force played the end boards well, nearly getting Gorsuch out of position for a goal, and Kyle Haak did beat Gorsuch but caught iron instead of twine. Otherwise, the Bronco’s senior goalie from St. Charles, MO, made seven of his 24 saves in the third. With three minutes remaining, Christopoulos hit the bench, but Ethen Frank potted his second goal of the night and third of the weekend from his own blue line. Lawton Courtnall potted an additional empty netter to end the scoring at 4-1 in Western Michigan’s favor.

Air Force drops to 11-8-1 in the season. Frank Serratore’s troops return to Atlantic Hockey play with a highly anticipated matchup against conference rival Army next weekend. Puck drops at the Cadet Ice Rink in Colorado Springs at 7:05 MT on Friday, the 11th, and at 5:05 MT on Saturday, the 12th.

“Air Force played well the entire game.” Trevor Gorsuch quipped. “Their goalie played, I’d say better than I did. He kept his team in it the whole game. So, it was a great game by everybody.”

Western improves to 11-6-1. The Broncos return to Kalamazoo next weekend to host the Miami RedHawks in NCHC play. Puck drops against the Brotherhood at Lawson Ice Arena at 7:05 ET both Friday and Saturday night.