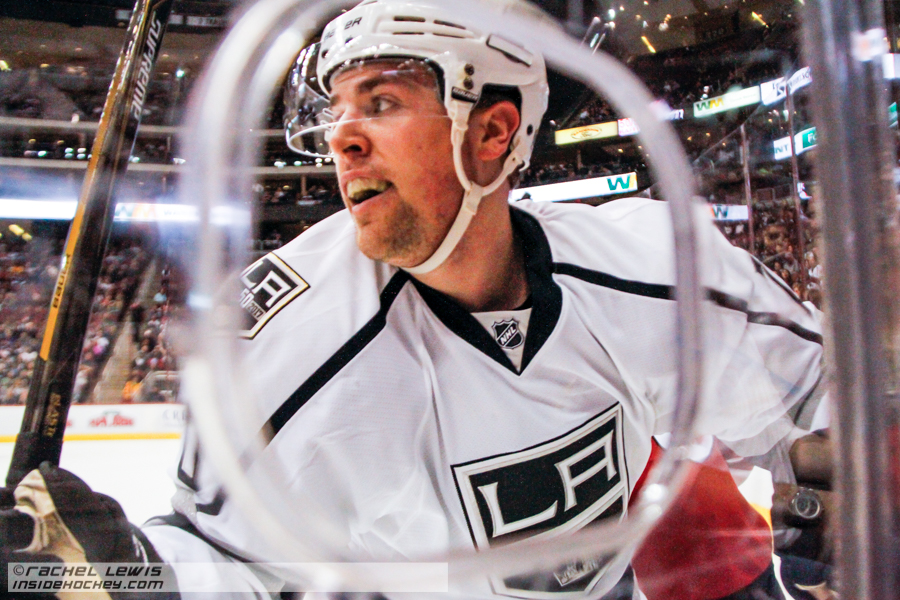 Tanner Pearson (LA - 70) gets checked into the boards.

The LA Kings began the year like a house on fire. By which I do not in any way refer to the actual houses that caught on fire in the North of the state. No, it was their record that blazed.

The team has now played twenty games. They lost four in a row before Saturday, but they righted their direction against Florida. It’s just one game, and they have to play in Vegas Sunday, but it’s a start on being back to who they started the year being.

Hottest of them all, until Saturday, was Anze Kopitar. He had a ten-game point streak coming into the team’s game against Florida. This is the longest streak by an LA player since Dustin Brown scored points in the same number of games in 2012. You know what happened later that spring. The Kopitar streak died versus Florida. Eleven players got a point. Toffoli got two, on a goal and an assist. Kopitar got nothing.  Not even a shot. He did have three attempts blocked.

Kopitar still finds himself in the top ten in scoring in the league. Coming into Saturday, he was eighth in the league, with 23 points on nine goals. He has now moved past Bernie Nicholls for fifth on the Kings’ all-time points list, to put his start in longer perspective.

But he hasn’t registered a multi-point game in the last five, and he has only two goals in the last nine games.

The start of the season seemed like a refresh, and refreshing. Gone was Sutter with his choke-down style. Gone was the nonsense of the post-game press conference. In came a guy who’d been there all along, John Stevens, promoted to Head Coach and actually able to string together sentences that explained the play of his team (Imagine!) after the game. Wonderful.

Along with Stevens came an approach that was more offensive. The hoped-for 2-1 win was in the past. Kopitar, and the other forwards, were shooting the puck.

That’s kinda gone. The Kings registered just 20 shots on Saturday, for instance. But the Kings can, in its place, pride themselves on their ability to defend. They sat second in the league (before Saturday’s action) in GAA, and they were tied for second in goals against. They were leading the league in PK percentage, hovering a tick below 90%. Eighty percent, for those of you unfamiliar with the formula, is where you want to be. They upped their numbers with three  penalty kills versus the Panthers.

They started out on Saturday doing the right thing. They killed a penalty where the Florida team didn’t get a puck close to the net despite holding onto it in the LA zone for much of the two minutes.

And they scored a first-period goal. It was a master of offense, and it paid off what Stevens said on Thursday night when he commented that his team needed to get the puck below the goal line of the other team and not let it get below their own.

Alex Iafallo, who ended up not figuring in on the points, stole a puck behind the Florida net. He passed it backhand to Brown, who held it under pressure from the D at the side boards. Brown dropped the puck to Doughty, who snapped a shot across the slot near the crease. Toffoli was there to redirect it in, along the ice, just past the outstretched pad of James Reimer.

Four Florida players were drifting back on the play. Nobody got either the puck or the goal-scorer. At least two had chances to do those respective things.

Toffoli almost repeated his feat near the buzzer, when he spun in front of the net and almost got a stick on an exactly similar pass.

The Kings made one change in their lineup from Thursday night’s loss to Boston. Andrew Crescenzi was scratched in favor of Nic Dowd. That meant that the third line, or fourth, was Jokinen (second Kings game) with Dowd and Jonny Brodzinski.

Dowd was back in after sitting two games. He had an assist, but also four penalty minutes of the six the Kings took. He was good in the circle, winning five of eight faceoffs. So go figure whether his inclusion is a good idea.

Brodzinski is a much-touted player who began the season in LA playing three of the first five games. He then got sent back to the AHL. Both he and his coach commented on that after the Saturday contest.

Brodzinski said, “Obviously kind of a kick in the butt getting sent down to Ontario. But coming back up here with some confidence. A little bit more patient, trying to play my game.” He talked more about that later in his post-game comments. “My hockey senses weren’t all there at the beginning of the season. It wasn’t fair to these guys, either, because I was a little hesitant sometimes on the forecheck. Going down to Ontario, playing sixteen, seventeen minutes a game, you get your hockey senses back, react to the puck differently, getting open a little bit better.

Stevens added about the young center, “Jonny to his credit . . . went back to the minors and really started to get his game in order. He started to play with the pace he can play with, and now that he’s come back, he’s a lot more confident young man.” He finished, “That was a bigtime play that he made tonight, but that’s what we thought Jonny’s capable of, so it’s good to see.”

The good news that the coach refers to is that Brodzinski scored his first NHL goal. That was the team’s second, on a wicked backhand that launched up and over the goal’s left shoulder. Assists went to Jokinen, who has now doubled his point production in LA (with two) over what he had all season thus far in Edmonton (one), and Dowd, as noted.

Brodzinski described the scoring play: “It was a great feeling. Getting a few shots every game. Not a lot of Grade A’s, but finally found a little bit of area there in the slot and got one away.” He added, “On our pre-scout, they go man-on-man in zone, and I shook that first guy. That created a lot of ice for me to skate the puck in.”

He would later add, “Not how I was expecting the first one to go in, but we’ll take it. I’ve been imagining it in my mind, for quite some time, but I always thought it would be a forehand shot.” He has a wicked snap wrister.

The goal went in high, as was said, and IH asked him about the backhand. “Pre-scout, Billy [Ranford, Kings’ goalie coach] told us that a good shot was kind of just off his elbows, because he shrugs a little bit. I just tried to get it upstairs. It was rolling on me.” He zinged it.

To carry on with the LA lineup, playing together and dominating the minutes: Kopitar, Brown, and Iafallo, as it has been. Kopitar had 21:51, the most of any forward. A very much rejuvenated Dustin Brown had nearly twenty. You already know about his fine play on the team’s first goal.

Tanner Pearson is still demoted to a line with Nick Shore and Trevor Lewis.

That leaves one line: Kempe with Toffoli. And Andreoff. You figure that out on a team that needs offense. Pearson had been playing with Toffoli prior. In fact, for a couple of years. Their normal center, Jeff Carter, is out for months, a fact fans are well familiar with.

The LA dominance continued through the second period, which saw Florida with one shot through fifteen minutes. They eventually registered three. Odd, since they’d finished period one up by 14-5. The second period shots were LA 7, the Panthers 3. Grand totals to that point: 17-12 in favor of the visitors.

Neither goaltender was tested in period two. The one best chance of the frame saw Kempe rush the puck down the left side. He intended a shot but had no angle. Carrying it around the net, he saw Toffoli in front, and passed it out. Toffoli launched a one-timer. Reimer made a lovely low glove save.

The best near-miss came when Pearson went to the net with Lewis picking up a loose puck across his own blueline. He rushed it up ice, tried to pass it over, but saw it intercepted on the way across. Pearson ended up upside down inside the Florida net.

The crowd as relatively quiet all along. And the arena was not full, despite the announcement of a sellout. True story that partly explains this: I ran into a friend on the way down on the train. He had two extra tickets in the lower bowl, value $170 apiece, and was going to sell them to a scalper on the way in. Perhaps there’d be no scalping involved, since he was willing to take $100 for the pair. So let’s call the purchaser an “unused entry device recycler.” Anyway, someone was going to see a game from way down near the ice where the fancy people are for not much more than fifty bucks.

The third period started 1-0 and ended 4-0 for LA. The last goal was an empty-netter scored with close to three minutes left. The goalie had departed at four minutes. No wonder. The Kings had opened the 3-0 lead at 15:19 on Andy Andreoff’s first goal of the year. The calendar year.

Near the end, Kopitar had two tries at the empty net. One was from his own blueline, a backhand tossed long down the ice and wide. The second was another long toss after a deke of a Florida player just on the LA side of center. Wide also.

Good to try for the goal, but maybe a bit irresponsible to possibly deny the goalie the shutout on a faceoff play that might go against the Kings after the icing call. Kuemper didn’t say anything about that after, but he did comment, “It’s always exciting to get one, but it takes a full team effort. They’re doing a lot of good things in front of me for that to happen, but really happy with the results.”

“Definitely when you’ve got a case of the skids, you want to kick it in the butt as quick as you can,” the netminder said.

The team will have no need of a special curfew in Vegas, according to coach Stevens. “There’s lots of times to go to Vegas for things other than hockey, but we go there as a hockey team. I think from the outside it might look like that’s an issue, but the fact that we’re playing a big Divisional game, what goes on outside the rink there is a non-issue.”

Educators, librarians, help me out here: my new book is called Mixing Memory and Desire: Why Literature Can’t Forget the Great War. It’s an academic treatment of contemporary Commonwealth fiction about the war.