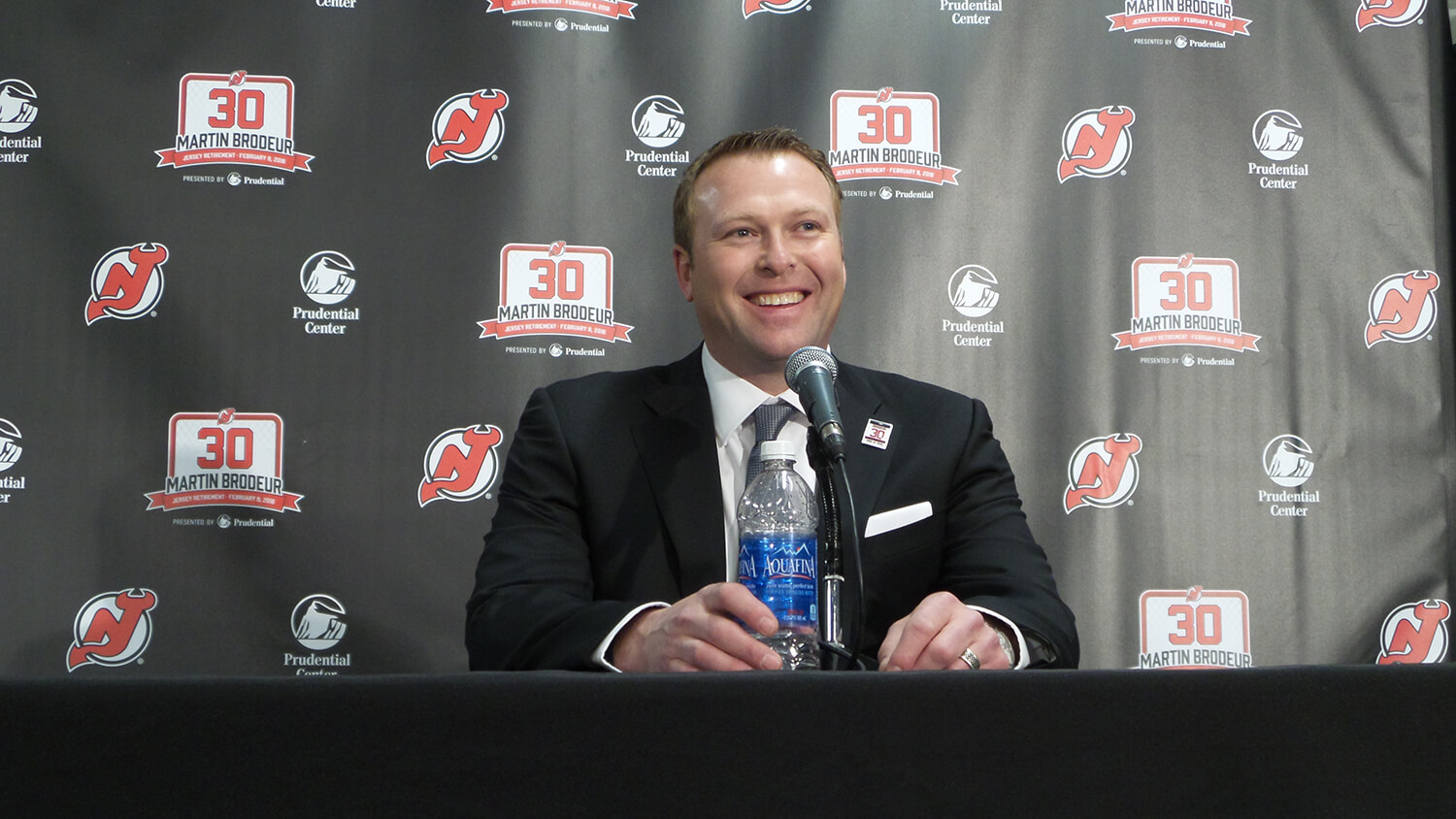 The New Jersey Devils honored Martin Brodeur on February 9, 2016 by lifting his #30 to the rafters. (Photo by Michelle Kenneth)

Brodeur Heading to the Hall

Martin Brodeur always had a way of looking calm, cool and collected in net in a career that spanned more than 20 years. And that figures to be the case again on Tuesday afternoon, when the sure-fire, first-ballot Hall of Famer, becomes what he’s always seemed destined to be.

This afternoon the 2018 indutees to the Hockey Hall of Fame will be announced. Brodeur, 46, is the only virtual lock of this year’s hopefuls which also includes fellow countryman and prolific goal-scorer, Martin St. Louis as well as Daniel Alfredsson and Ryan Smyth, two players not elected in their first year of eligibility last summer. Others including Alexander Mogilny, a teammate of Brodeur from 2000-2001, winning a Stanley Cup together, are also strong candidates to be enshrined together.

The resume for Brodeur is impressive and bulky: a record-691 career wins (140 more than Patrick Roy); 125 career shutouts, also tops among NHL goaltenders and doesn’t include any of the 24 accumulated in the postseason (also an NHL record). Hardware-wise, he is the recipient of four Vezina Trophies, as the league’s top netminder and four Jennings Trophies, allowing the fewest goals among starters. At 22, he won the Calder Memorial Trophy as the top rookie, beating out Oilers’ Jason Arnott and Philadelphia’s Mikael Renberg. Though he never won a Hart Trophy as the league’s most valuable player, he was a finalist for the award in 2003, 2004 and 2007.

His excellence in net allowed the Devils, his team for nearly all of his career, to enjoy great success on a usually conservative budget. Three times they achieved the pinnacle of hockey–the Stanley Cup in 1995, 2000 and 2003. Drafted 20th overall in 1990 (the second goalie taken that year behind Trevor Kidd), he became the face of Lou Lamoriello’s team that challenged for the Cup seemingly every season that Brodeur was the last line of defense. He made five total trips to the Final in his career–coming a game short in 2001 over Ray Bourque and the Avalanche and in 2012, when at age 40, he led the Devils to a surprise run that ended in six games to the L.A. Kings.

Just as accomplished on the world stage playing for Team Canada, the Montreal native backstopped the nation to gold at the 2002 Winter Olympics in Salt Lake City. He’d achieve gold again playing for the red and white at the 2004 World Cup of Hockey and won his final gold medal in Vancouver at the 2010 Olympics, where he shared the net with Roberto Luongo.

Twelve different seasons saw him play 70 or more games and showed little sign of fatigue–displaying some of his best work during including eight 40 or more win seasons and a 48-win season in 2007–a record that only recently became shared with Capitals’ Braden Holtby.

In 2015, the Devils retired Brodeur’s iconic No. 30, the fourth Devil at the time to receive such honors and the only player to have a statue outside the Prudential Center. He’ll soon join Lamoriello, Scott Stevens and Scott Niedermayer as long-time Devils in the Hall. Brodeur’s ascention though feels like the most-anticipated yet among fans given his special place in the history of the game and position as arguably the very best.

The anticipation and waiting will all be over on Tuesday, when the goaltender that seemed destined for this since the halfway point of his career will be formally introduced as a Hall of Famer.

Brodeur appeared in 1,266 games–1,259 with in New Jersey before signing with the Blues in the middle of the 2014-15 season and playing seven games with the club. At the conclusion of the season, he elected to remain in St. Louis as the club’s assistant general manager.