Brodeur: A Night to Remember

Brodeur: A Night to Remember 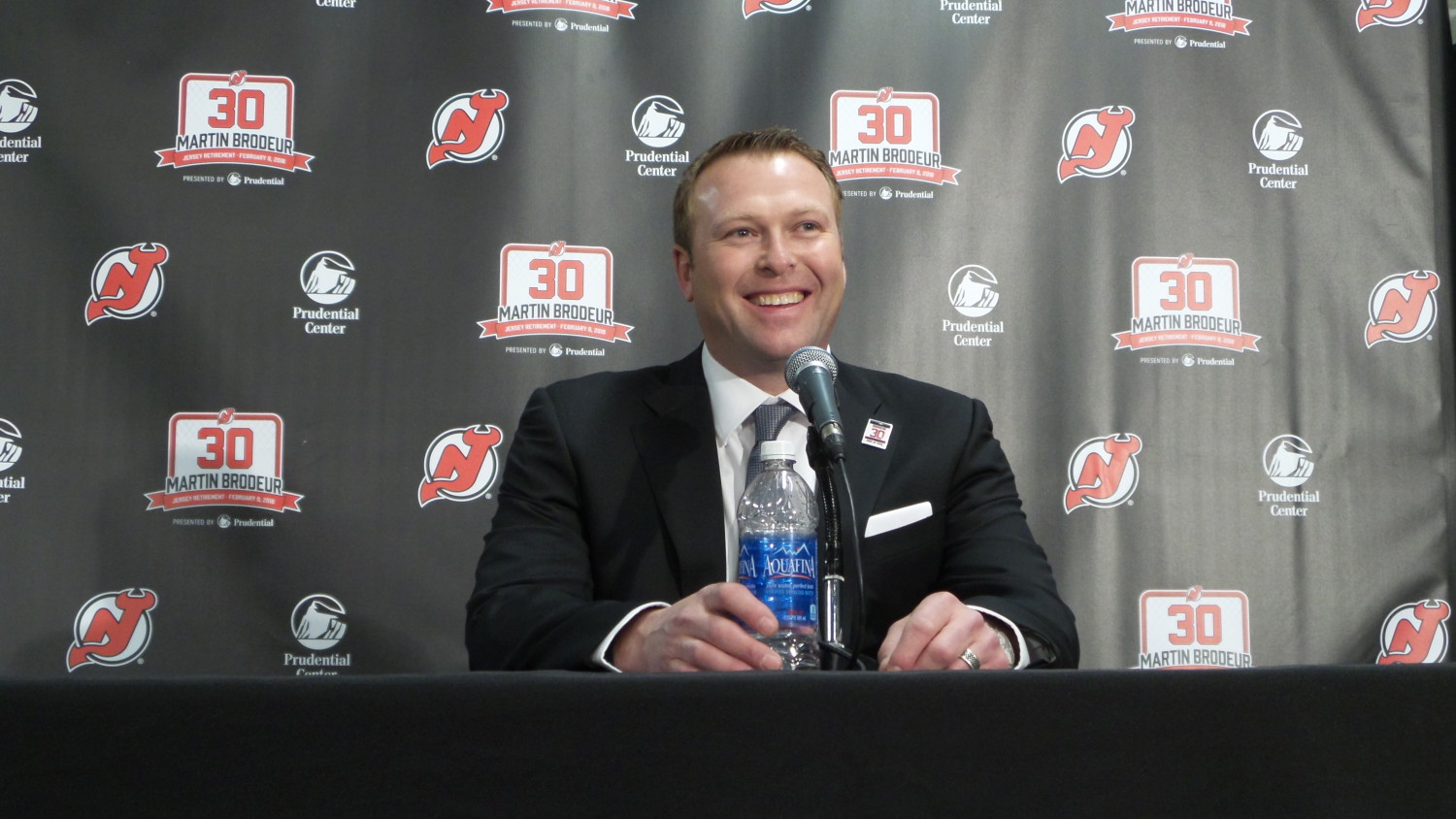 The New Jersey Devils honored Martin Brodeur on February 9, 2016 by lifting his #30 to the rafters. (Photo by Michelle Kenneth)

The atmosphere at Prudential Center on February 9, 2016, was filled with a heightened level of excitement.  Fans in a sea of #30 jerseys were nervous and excited as they rushed to get to Prudential Center by 6PM.  Outside of the arena, in the cold, bitter air, one could feel the energy in the air building up as fans piled into the building.  It was that same kind of excitement and energy you could feel whenever the Devils were in the Stanley Cup Finals.  The last time that feeling emanated through the air in Newark, New Jersey was in 2012, the last time the legendary goaltender Martin Brodeur played in the Finals.

But this wasn’t the Finals.  This was the night the New Jersey Devils would honor him as a legend and lift his #30 to the rafters.  This was Martin Brodeur’s night.

This wasn’t just a night for Devils fans.  This was night for the entire hockey community to honor the goaltender that became the best goaltender in the history of the NHL.

Brodeur broke record after record to become the best goaltender ever.  With his 552nd career win, he surpassed Patrick Roy to become the most winningest goaltender in the history of the NHL.  He then made it more difficult for the next person that would attempt to beat his record by ending his career with 691 career wins.

His NHL all-time leading record includes 125 shutouts, 1,266 games played, 69 overtime wins, 28,928 saves and played 74,438 minutes.  Add on to that all of the trophies he won.  He won the Calder Memorial Trophy as the top rookie in 1994.  He helped his team win three Stanley Cups.  He had four Vezina Trophy wins and five William M. Jennings Trophy wins.

What made Brodeur one of the best goaltenders in the history of the NHL wasn’t just Marty himself.  His teammates he’s played alongside, the coaches, his family, Devils trainers and staff, and Lou Lamoriello all helped to create this champion.

Current and past teammates, past coaches, Pat Burns wife, Line, (in honor of coach Burns who passed away in 2010), NHL Commissioner Gary Bettman, Lou Lamoriello, and the Brodeur family were in attendance for this important night in honor of the legendary goaltender.  This was a way for the organization, the NHL and the fans to say thank you and for Brodeur to have closure.  This would be one of the last times, after 20 years of his career, to hear fans chanting his name and “Marty’s Better.”

Noted moments of the ceremony:  As expected when Gary Bettman speaks before fans, fans booed him throughout most of his speech.  When Lamoriello got up to speak, the fans chanted “Looooooou.”  When the crowd quieted back down, Lamoriello turned to the commissioner and said, “Commissioner, that’s not the same reaction you got.”

“You’re the reason for my success.”  – Brodeur to his teammates

“You made me a champion.” – Brodeur to Lamoriello

“Thank you for all the Marty’s better chants.” – Brodeur to the fans

Here is the press conference after the ceremony.

Congrats Marty Brodeur on your great career. I know you let me score my first NHL goal on you but it was still really good. #SaluteMB30 🏒

Congratulations tonight to one of the all-time greats @MartinBrodeur #SaluteMB30

Congrats on your achievements. Your style, smile during games, and success made me look up to you. #SaluteMB30 pic.twitter.com/CTLIZXzv2R

Stick tap @MartinBrodeur on a great career! We'll never forget his 4OT duel with Hasek in 94 at The Aud. #SaluteMB30 pic.twitter.com/F1LyuB4zkw

Stick taps, @martinbrodeur. A worthy opponent & a legend of our game. Congrats on an incredible career. #SaluteMB30 pic.twitter.com/2JO4mP0lbG

"Getting to play against you was incredible, playing with you was phenomenal." Doan on @MartinBrodeur #SaluteMB30https://t.co/ays0za2vb1

Congrats @MartinBrodeur One of my favorite goalies to watch and an absolute honor to play against. #SaluteMB30

The #NHLJets would like to salute @MartinBrodeur on having his #30 retired with the @NJDevils. #SaluteMB30 pic.twitter.com/i8qNYlqjXi

“So happy to see your face coming home… right where it belongs, in New Jersey” @brianlawton9 on Brodeur #SaluteMB30https://t.co/yqmFfmLZwd

Even the Edmonton Oilers came out on the bench to watch the ceremony.

“It was exciting to watch,” Adam Henrique said of the ceremony. “He was the greatest goalie to ever play the game. For me, I think everybody is a little different, but for me, I only played with him for a few years. You get to know him as a guy and as a teammate, not just the Marty Brodeur image. He’s such a great guy, a great teammate and leader in the room. For me, as a young guy coming in the first couple years, he took me under his wing and made me feel really a part of the team right from day one.”

When asked what he thought of Lamoriello’s jab at Bettman, Henrique’s smile took over his face. “I thought it was awesome! I was trying to hold back a little bit there. He came up with a zinger. 1-Nothing, Him!”