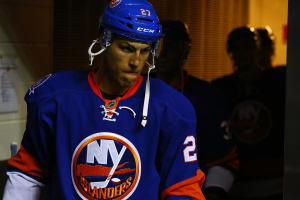 Johnny Boychuk’s power play goal at 2:52 of overtime gave the New York Islanders a 4-3 win over the Washington Capitals before a sellout crowd at the Nassau Coliseum Monday night. For the second consecutive night, the Isles blew a 3-0 lead in the third period, but this time, they found a way to earn the win.

“We had a three-goal lead in the last game and a three-goal lead tonight and you can’t be blowing those kinds of leads,” Boychuk admitted. “But we found a way to get a win when they did have a comeback and it’s another two points.”

The Islanders played a very strong game in the first period and took a 1-0 lead when Anders Lee deflected a shot from the point by Thomas Hickey in the slot at 8:15.

“I was just trying to create space in front of the net,” Lee explained. “Holtby has been playing really well as of late and we knew we had to get in his face and screen him as much as we could. Tomas [Hickey] put a great shot on net and I was able to get a stick on it and put it in.”

The Islanders outshot the Capitals  11-6 in the first period and controlled the game for large stretches of time.

Lubomir Visnovsky made it 2-0 Isles on a power play goal at 10:06 of the second stanza. His hard shot from the point hit Washington defenseman Brooks Orpik and got past Braden Holtby for the goal. Once again, Lee was in front of the net making it more difficult for Holtby to see the puck.

Calvin de Haan netted his first goal of the year just 1:41 into the third period. It came with the Islanders shorthanded. John Tavares set it up with a pretty cross-ice pass and de Haan’s shot was a bullet that went in just under the cross bar.

Then, the Caps began their comeback. Eric Fehr got the Capitals on the board at 4:40 and the sellout crowd began to groan. Then, Nicklas Backstrom scored on a two-on-one breakaway off a nice pass by Alexander Ovechkin at 6:29 and suddenly, the three-goal lead was down to a one-goal difference and the building grew even more tense.

Ovechkin himself scored on a blast off a faceoff at 17:19 to tie the game from the left circle. It was Ovechkin’s 17th goal of the year and the Coliseum went quiet.

But the players on the Islanders’ bench did not get too discouraged. “Initially, we weren’t too happy about it, but we calmed down real quick and got back to our game,” Lee said.

The Islanders got a big break with 1:04 left in regulation when Evgeny Kuznetov received a double minor for high sticking. That gave the home team 4:00 of power play time including nearly 3:00 of four-on-three in the overtime.

The Islanders finally broke through when Boychuk scored with just four seconds left on the man advantage.

Isles head coach Jack Capuano was relieved to win this game, but the coach sees some key differences between this year’s team and some of the clubs he coached here in the recent past. “Maybe we don’t win this game last year or the year before,” Capuano said. “Even though they got those goals, they didn’t deflate our hockey club. I’m looking at the emotion on the bench, I’m looking at our structure and I’m looking at our pushback. In Buffalo and here tonight, we pushed back, we’re playing on our toes and did a lot of good things.”

The win improves the Isles record to an impressive 24-11-1 including a 14-4-0 mark at the Nassau Coliseum.

The Islanders return to action Wednesday night when they kick off a seven-game road trip in Winnipeg against the Jets.

Washington defenseman Brooks Orpik left the game midway through the third period when he hit the boards hard in an attempt to check Cal Clutterbuck. Orpik needed assistance to skate off to the Washington locker room. He did not return.