Orono, ME. —  Temperatures in northern New England hovered slightly around 0 degrees this Martin Luther King Day. Inside the University of Maine’s Alfond Arena, a 40-year-old rivalry was firing up for its first installment of the 2018-19 season. The Black Bears were hosting their hated rival, the University of New Hampshire Wildcats. For UNH Head Coach Mike Souza, this would be his first tilt at the helm. Souza, a four-year star for the Wildcats, knows all too well about UNH vs Maine.

The Wildcats and Black Bears have each struggled over the past few years. Neither team has had a winning season in the same season since 2013-14. Neither school has had postseason success in a long while, and it has been over 5 seasons since either has qualified for the NCAA tournament. However, when these two teams meet, records and standings go by the wayside.

Maine’s coach Red Gendron certainly has his detractors, but had his contracted extended last March to run through the 2020-21 season. It could be more of the same here in Orono. However, the grass appears greener for UNH and new coach Souza. So far in his first season as bench boss, Souza has the Wildcats in 7th place in Hockey East, one point above Maine. A slow 2-6-5 start for the Wildcats, has been turned around after a 6-2-1 December and January.

Per usual this one was a physical affair right from the opening face-off. Lots of checking, lots of bodies flying, and not a shot on goal until Maine registered one around the four-minute mark. The Wildcats would get their first shot two minutes later. The Black Bears carried play for much of the first. Chase Pearson had a chance as he raced past two UNH defenders but was turned away by goalie Mike Robinson. Shortly after that chance, Maine’s Canon Pieper had a similar chance that Robinson again successfully defended.

A Slashing call on UNH’s Benton Maass at 9:04 was negated just five seconds later when Maine’s Pearson was called for the same infraction. Four-on-four play on the small Alfond surface opened up the play enough for Maine’s Brendan Robbins to tap home a Mitchell Fossier shot/pass at the side of the UNH crease for the 1-0 lead. UNH came right back with an opportunity of their own. A Marcus Vela shot on a two on one that Jeremy Swayman easily saved.

At 16:34 Maine’s Pearson skated down the side of the UNH zone and threw the puck on net and somehow managed to put it past Robinson for the 2-0 lead. Again, the Wildcats bounced back with pressure but were unable to penetrate the Black Bear goal.

The Wildcats came out flying for the second.  Controlling play in the Maine zone, UNH pressure drew an Interference penalty on defenseman Alexis Binner at 7:54. A half-minute later Maine was called for Too Many Men giving the Wildcats a five on three. Defenseman Max Gildon dished the puck from between the circles to Liam Blackburn down low. Blackburn was able to fake Swayman into diving on the ice, and simply wristed the puck into the Maine net cutting the deficit to one. That point extended Blackburn’s point streak to 13 games. UNH forwards Patrick Grasso and Marcus Vela continued to make Swayman work but couldn’t tie the game. During a scrum in front of Swayman, UNH’s Ryan Verrier hit the crossbar. A Gildon Hooking penalty at 16:53 resulted in Maine’s hitting the crossbar as well on the man advantage. The period ended with the score 2-1 Maine, but UNH outshot the Black Bears 13-7 and won the face-off battle 20-15, as they clawed their way back into the game.

The third period was a frenzy of activity as both teams had quality scoring opportunities. UNH kicked it off at 2:33 when Chris Miller took a Blackburn pass and beat Swayman over his shoulder with a wrist shot tying the game at two. All night the UNH defense struggled to contain the Maine forwards in transition. Mitchell Fossier, already with two assists on the first two goals, took a stretch pass from the Black Bear zone and raced in from the Wildcat blue line. He had a defender pressuring him from behind and put the puck wide to Robinson’s left.

Maine again exploited UNH’s defense with a nice passing combo from defensemen Simon Butala to Brady Keeper to a streaking Brendan Robbins who made sure he beat Robinson on the break this time. 3-2 Maine with 14:46 to play.

Back and forth the play went, in a cleanly played period with no penalties called. A Wildcat barrage on Swayman resulted in a Jackson Pierson game-tying goal at 12:00 when he snapped a shot through a scrum, into the net from the slot.

Already with an assist in the game, Angus Crookshank added to his point total, after he blocked a Maine defenseman’s shot, chipped the puck past the defenseman, and started the UNH rush. Crookshank lost the puck down low but Blackburn was able to keep the play in the Maine zone and sent the puck back down to Crookshank. He calmly walked in on Swayman and backhanded the puck into the upper corner past the goalie’s glove side. 4-3 UNH at 17:14. However, this was a UNH-Maine game and it was far from decided.

Maine had yet another chance on a UNH neutral zone breakdown but couldn’t beat Robinson. Maine had steady pressure in the Wildcat zone, with the student section overhead willing their team on. As Gendron called for Swayman to vacate the Black Bear net for the extra attacker, newcomer defenseman Jakub Sirota was setting up to fire a game-tying wrist shot from the point. By the time Swayman got to the Maine bench, the puck was in the back of the net and the 3702 Black Bear fans in attendance were rocking to the fog horns.

The overtime period continued on in the same vein, as Chase Pearson skated the length of the Alfond ice and deked one last defender but put the puck into the safety netting behind Robinson. UNH even had a rare OT power play when Keeper was whistled for Hooking at 1:02. Even with a Time-out called by Souza during the power play, the Wildcats couldn’t muster a goal. Maine had solid pressure as the final minute wound down. Gendron also called Time-out with an offensive zone draw but it was to no avail. 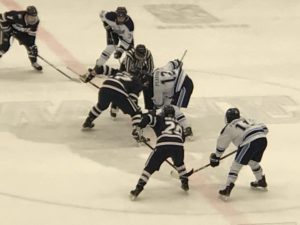 UNH’s Marcus Vela squares off against Maine’s Chase Pearson for the Overtime face-off.

This game was all that is expected in the “Border War.” Physical, fast-paced, and back and forth. After the game, the tone of the two coaches was markedly different.

“It is what it is, we missed a few breakaways,” Maine’s Gendron said. “Bottom line is it was 65 minutes, there’s no fingers of blame, to point. Bottom line is we have to finish off more plays, that’s it.”

Gendron spoke of the game of inches, and on this night “we needed a few more inches to get a win, but we got enough inches to not lose the hockey game.”

Mike Souza was a bit more upbeat. “It’s not an easy place to get a point, disappointed we didn’t get two. I don’t think either team is ever satisfied with a tie but I thought it was a good tie. You go down 2-0, you score 3 third period goals. we thought our kids competed hard, I thought their kids competed hard… It was a good old-fashioned Maine-UNH hockey game.”

UNH has a home and home with UConn this weekend. The Wildcats travel to Connecticut for the 7:05 start on Friday and host on Saturday at the Whittemore Center at 7:00 pm. Maine will host #2 UMass-Amherst for two, with Friday being a 7:30 start and Saturday a 7:00 pm start. These two teams will square off again the following weekend for a pair at UNH.