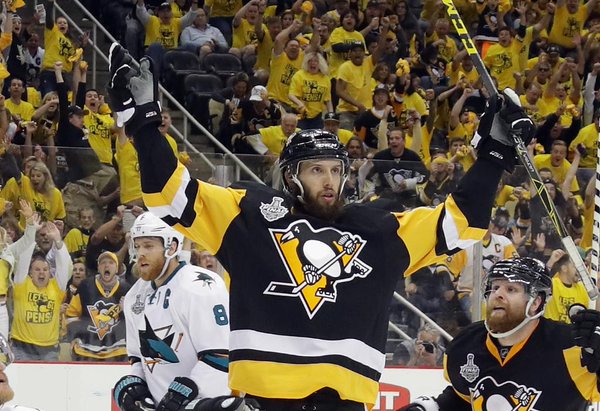 Nick Bonino scored with just 2:33 remaining to give the Pittsburgh Penguins a 3-2 win over the San Jose Sharks in Game 1 of the Stanley Cup Final. It was a disappointing loss for the Sharks who overcame a 2-0 deficit to tie the game at 2-2.

The Sharks have come a long way since their first season in 1991.

Roughly a year ago, San Jose hired Peter DeBoer as their new head coach. DeBoer led the New Jersey Devils to the 2012 Stanley Cup Final, however, the Los Angeles Kings eliminated his former team in six games. Fast forward to this season when DeBoer led the Sharks to the playoffs after finishing third in the Pacific Division.

The Penguins advanced to their first Stanley Cup Final since the 2009 Championship season.

It was a Memorial Day showdown Monday night as the San Jose Sharks and Pittsburgh Penguins faced off in Game 1 at Consol Energy Center.

However, there could only be one winner in the series opener, and it was the Penguins.

“They came out flying,” Sharks center Logan Couture told NHL.com correspondent Shawn P. Roarke. “It looked like we were stuck in mud. Shouldn’t happen. Obviously this is the first time for a lot of guys, so maybe that was it. This time of the year, the games are too big to have a start like that.”

The Sharks were off to a good start, winning the first six faceoffs, but the Penguins stepped their game up. Pittsburgh went on their first power play of the night after Dainius Zubrus went to the penalty box for high sticking Ian Cole.

Bryan Rust slammed a deflected puck into a wide open net to give the Penguins a 1-0 lead at 12:46.

Sidney Crosby set up Conor Sheary with a beautiful dish. Sheary then went top shelf on Martin Jones to give the Penguins a 2-0 lead at 13:48.

Special teams have contributed to the Sharks’ suceess. They went on their first power play of the night after Ian Cole went to the penalty box for hooking Melker Karlsson. After that, Tomas Hertl slipped a shot between the pads of Matt Murray on the power play, cutting San Jose’s deficit to 2-1 just 3:02 into the second period.

Patrick Marleau took a rebound and banked it in off the skate of Murray, tying the game 2-2 at 18:12.

The contest was tied 2-2 after two periods. Shots (23-17) remained in favor of the Penguins, despite the Sharks catching up with 13 in the second.

The third period was fairly even. Some people thought the contest would head into overtime, but Nick Bonino roofed a wrist shot to finish a flawless pass from Kris Letang for the go-ahead goal, his fourth goal of the playoffs, putting the Penguins ahead 3-2 at 17:27.

The Penguins overcame a slow start to take Game 1 with a 3-2 win over the Sharks.

“I think that we just did a really good job of not trying to feel the game out, especially early,” Penguins captain Sidney Crosby said. “I thought we did a good job of just playing and trying to get to our game, and it gave us a big boost to get that kind of start.”

Matt Murray made 24 saves for Pittsburgh. Martin Jones made 38 saves for San Jose.
The Penguins lead the best-of-seven series 1-0.