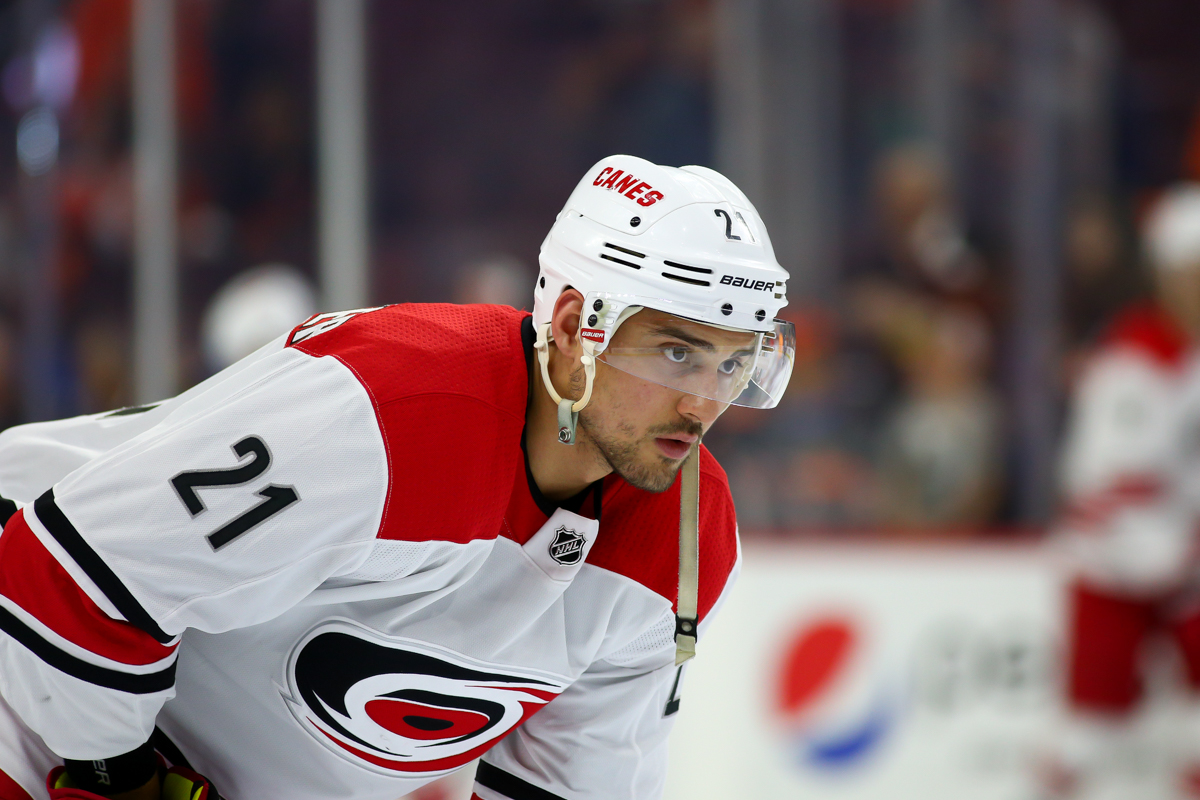 TAMPA -The Carolina Hurricanes were looking for push back after last night’s 3-2 overtime loss to the the tenor and tenacity of Tuesday night’s 4-1 win over the Tampa Bay Lightning.

Carolina coach Rod Brind’Amour said the Hurricanes needed to “up the ante” after Monday night’s loss and that they did.

“That was a 60-minute effort all the way through,” said Braind-Amour. “They had some shifts, but nothing like the other night in their end. It was solid, top to bottom, good game.”

Within a lightning strike of 25 seconds midway through the second period, the Hurricanes served notice that first place in the Eastern Conference would not be surrendered on this night.

Carolina center Vincent Trocheck rushed on the fly up the left side of the ice and passed into the slot for the waiting Nino Niederreiter who threw the shot left of Andrei Vasilevskiy at 7:48 in the second period to break the scoreless draw and give Carolina a 1-0 lead.

“It was a terrific pass and he had a lot of speed on that play and he fed me perfectly and we got the goal,” said Niederreiter.

The ‘Canes would add on immediately as on the next shift, Jordan Staal redirected a Dougie Hamilton laser for a 2-0 lead some 25 seconds later at 8:13. Staal got free of Tampa Bay’s Yanni Goude and changed direction of the puck which was fired off the right side of the ice.

Niederreiter got the secondary assist as he dug the puck out of the boards and passed it to Hamilton.

“Those are special and it’s a game of battles and Jordan does it every shift,” said Hurricanes coach Rod Brind’Amour.  “It’s nice to see him get rewarded. It’s nice to get those against a guy you battle every night.”

The chipiness of Monday night’s matchup between the two rivals was continual as the referees had to continually get between players to avert any fights other than the Barclay Goodenow-Jordan Martinook matchup just before Staal’s goal. both players picked up five minutes for fighting.

“I think everybody was a little bit angry from last nights game and everybody was disappointed the way it came out,” noted Niederreiter. “From the beginning we got puck in deep and let it go from there.”

The Lightning took 34 hits and the Hurricanes 28 as they physicality may have worn the teams down in addition to the back-to-back.

The Hurricanes’ fourth line got into the act when center Steve Lorentz all but buried the Lightning at 16:45 as he took a pass from Morgan Geekie and punched it by Andrei Vasilevskiy for a 3-0 lead. It was his second goal of the season and Geekie’s second assist.

Brayden Point scored the only Lightning goal at 17:03 from Ondrej Palat and Ryan McDonough. It was Point’s 20th goal of the season and Palat’s 26th assist of the campaign.

The Tampa Bay Lightning came into Tuesday night’s game one point back of the Hurricanes and the Florida Panthers in the Central Division.

Alex Nedeljkovic picked up his 11th win for the Hurricanes, as he stopped 26 of 27 shots and handled both Lightning power plays.

“We had some pretty good looks there in the third and their goalie played well and that was it,” said Cooper. “The game didn’t have the same kind of emotional checklist that the night before did and they played well tonight. They played better than us tonight.”