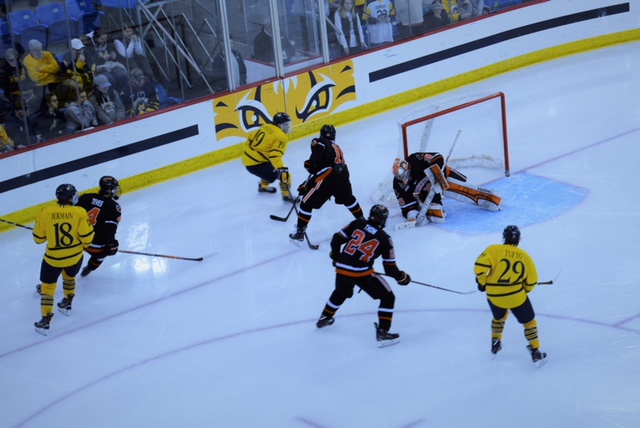 New Haven, CT- Ingalls Rink sat empty for the duration of the 2020-21 season. The Yale Bulldogs returned to the ice last week for a single road game against Brown and played their first home game since defeating Union in the opening round of the 2020 ECAC Tournament 608 days prior. Their closest geographic rival, Quinnipiac, welcomed Old Eli back to the Connecticut ice with a powerful offensive demonstration.

Quinnipiac outshot Yale 37-12 for the game and held Yale to their second straight scoreless game. The Bobcats started the scoring with a slick passing pay from Vermont transfer Joey Cipollone to Jayden Lee who notched his second goal of the season 16:10 into the game.

The Bobcats buried two goals in the third. Ethan de Jong went first off a faceoff win by Wyatt Bongiovanni 1:02 into the final stanza. TJ Friedmann closed the scoring in the final minute of the game and Yale’s first home game in almost two years ended 3-0 for Quinnipiac.

The Bobcats improve to 6-1-2 overall and earn their first win in ECAC play.

Freshman goalie Yaniv Perets, of Dollard-des-Ormeaux, Quebec, stopped all 12 shots he faced for his second shutout of the season.

Yale drops to 0-2-0 in both the overall record and ECAC play.

Goalkeeper Nathan Reid made his collegiate debut and was one of twelve Bulldogs making their home debut. The Madison, WI, native and former Sioux Falls Stampede goalie stopped 34 shots in his first college game.

“I thought our guys competed hard,” explained Head Coach Keith Allain. “We obviously spent a lot of time in our zone but we limited their Grade-A’s. We just gotta keep working at it.”

“We are hungry,” said Reid. “We are goal-less and win-less. And that frankly pisses a lot of us off. We’re gonna do everything we can to get a win tomorrow.”

Old Eli hosts Princeton at the Yale Whale on Saturday. Puck drops at 7 PM between the Ivy League rivals.