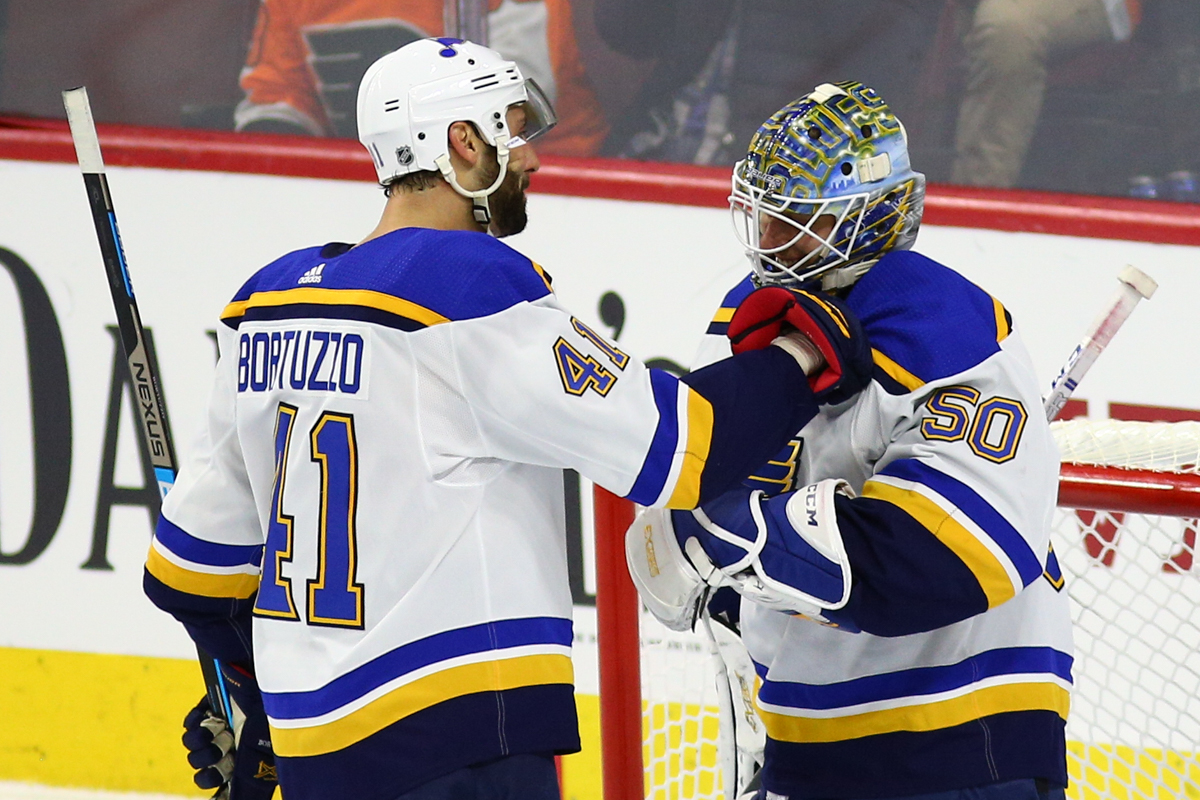 Boston, Ma. – The St. Louis Blues just might be the most resilient team in NHL history. Since the calendar flipped from 2018 to 2019 no team has done as big of a 180 degree turn as the Blues. Last place in the entire NHL on January 3rd to the Stanley Cup Finals in late May is a thing of legend. Any time a Stanley Cup game goes to overtime that becomes legend as well. When you score the game-winning goal you too become legend. Tonight’s legend, Carl Gunnarsson, only added to this legend by telling his coach Craig Berube, in between the third period and overtime, while relieving themselves that he “just needs one more chance.”

Gunnarsson had hit the post with about five minutes left to play in the tied third period. In overtime he left nothing to chance when he unleashed a blazing slap shot past Tuukka Rask at 3:51 of overtime. St. Louis had an extra attacker on the ice on a delayed penalty on the Bruins. The Blues had the Bruins penned in their zone for a majority of the brief extra period.

The first period had all the fireworks as Charlie Coyle put Boston ahead with a power play goal at 4:44. With forward Sammy Blais in the penalty box for Goaltender Interference, the top ranked power play of Boston needed less than a minute to capitalize. Jake DeBrusk passed the puck out from behind the Blues net to a wide open Coyle, who buried a slap-shot for his seventh playoff goal.

St. Louis responded five minutes later. Robert Bortuzzo gathered the puck at the right hashmark and fired a shot on net that beat Rask over his shoulder tying the game at 1-1.

Boston immediately answered at 10:17 when the forecheck of the Kuraly, Nordstrom and Acciari line led to a St. Louis turnover. Sean Kuraly picked up the puck behind the Blues net and dished out front to Joakim Nordstrom who slipped a backhander past Binnington.

St. Louis again answered the bell at 14:55 when Vladimir Tarasenko swiped his own rebound over a diving Rask. The Blues had sprung out of their zone when Brad Marchand over-committed on the forecheck, leaving Zdeno Chara alone on a two on one as Tarasenko and Jaden Schwartz raced up ice. Schwartz fired a shot on Rask that he made the save on, the rebound fell to Tarasenko but Chara got a stick on it. In a last ditch effort the Russian swiped at it and it hopped over Rask. This goal gives Tarasenko an eight game point streak, five goals and five assists in that stretch.

At 17:57 Oskar Sundqvist was called for Boarding when he buried Matt Grzelcyk into the glass behind the Bruins net. The defenseman would stay down for a few minutes. He was helped off the ice and didn’t return. He was transported to Massachusetts General Hospital for tests.

The Blues outshot the Bruins 10-8 and won the faceoff battle 10-7 in the first.

The second period seen Connor Clifton penalized at 3:34 for Interference. The Bruins killed it off successfully. Joel Edmundson was called for Tripping at 12:19. St. Louis outshot Boston while shorthanded. Again Clifton was penalized, this time he was assessed a Double Minor for High Sticking when he drew blood. With Clifton in the box for four minutes the Bruins penalty kill held firm, highlighted by Nordstrom blocking two slap-shots and getting his stick on a cross ice pass. Schwartz would plow into Rask, Goaltender Interference, at 17:56 and would give the teams a four on four situation to close out the second period.

The Blues again outshot the Bruins 14-6 for a 24-14 total through two periods.

The third period highlight was a point blank save by Rask on Brayden Schenn below the left circle. Schenn would draw a Slashing penalty at 15:22 but again Boston was unable to capitalize on having the man advantage. After three periods the Blues had outshot the Bruins 33-23.

It would take extra time to break the deadlock. That’s when Gunnarsson struck. His blast tied the series at 1-1 and sends the Blues back to St. Louis flying high after earning the road split. “Anytime you can get one on the road, obviously a tough building to come in and play,” said Blues defenseman Alex Pietrangelo. “It’s big for us, we’ve been a good road team. Game one didn’t go the way we wanted to but we’ll be ready here for these home games.”

St. Louis was the better team tonight. Tuukka Rask agreed. “Kind of a crazy first. You know, we got the lead, tie, lead, tie. Kind of bouncing back and forth,” said the goalie. “Yeah, I mean it probably wasn’t our best game today. So yeah, I think that when you are — especially in the playoffs —you know the better team always wins, so they were the better team today.”

In the end the Bruins didn’t seem to have it, especially after the Grzelcyk injury, skating five defensemen. The Blues were better on the puck than had been in game one. The two teams meet next on Saturday June 1 in St. Louis’ Enterprise Center at 8:00 pm Eastern Time.