Jake Allen made 31 saves in his first postseason start, Kyle Brodziak and Troy Brouwer each scored two goals, and the St. Louis Blues defeated the San Jose Sharks 6-3 in Game 4 of the Western Conference Final at SAP Center on Saturday.

Despite holding a 2-1 lead in the series, the Sharks weren’t thinking about their first trip to the Stanley Cup Final just yet. San Jose led the Nashville Predators 2-0 in the second round, lost the next two, and needed seven games to advance.

“We understand we got to take it day by day,” Sharks defenseman Brenden Dillon told NHL.com correspondent Eric Gilmore. “You can’t get too high or too low. You look at the Nashville series. I think that was a big learning curve for us because you go from being up two games to nothing, thinking the series was going to be over, and just like that it’s 2-2 and it’s best-of-three.”

“You just got to focus on the next game. It sounds so cliché, but it’s so true because things happen in games. Special teams can happen, you can run into a hot goaltender, whatever it might be.” 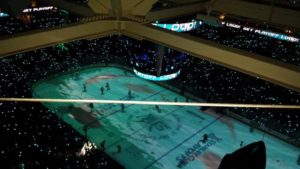 Sharks vs. Blues Game 4 was about to get underway at SAP Center.

Brent Burns went to the penalty box for tripping Jaden Schwartz five minutes into the first period. His minor penalty allowed the Blues to go on their first power play of the game.

Robby Fabbri and Paul Stastny set up Troy Brouwer, who buried the puck to complete the tic-tac-toe for his sixth goal of the playoffs. Sharks coach Peter DeBoer challenged whether the play was offside, but the officials said the Blues’ goal counted: St. Louis took an early 1-0 lead at 6:14 of the first.

Jori Lehtera scored his third goal of the playoffs to give the Blues a 2-0 lead at the 10:11 mark.

Jaden Schwartz fed Kyle Brodziak, who went top-shelf to finish the two-on-one rush for a short-handed goal. Brodziak’s first goal of the playoffs gave the Blues a 3-0 lead at 6:06 of the second.

Dmitrij Jaskin set up Brodziak, who fired a one-timer to beat Sharks goalie James Reimer for his second goal of the game as well as the playoffs. Thus, the Blues’ lead was expanded to 4-0 at the 10:11 mark.

The Blues were up 4-0 after 40 minutes. St. Louis still held a 22-18 advantage in shots on goal. It was clear the Sharks were in trouble. They only had two options — to sink or swim on their own. Turns out, they decided to swim.

Joe Thornton sent a perfect pass to captain Joe Pavelski, who buried the puck to finally get the Sharks on the board. Subsequently, Pavelski set a franchise record for most goals in the playoffs. San Jose reduced the deficit to 4-1 just 1:05 into the third period.

Joel Ward went to the penalty box for delaying the game by putting the puck over the glass. The Blues went on the power play, where they extended their lead to 5-1 at 3:55. Paul Stastny fired a shot and Brouwer deflected the puck past Reimer for his second goal of the game and seventh goal of the playoffs.

Alex Pietrangelo sent the puck down the ice and into the empty net for an unassisted goal. His second goal of the playoffs expanded the Blues’ lead to 6-2 at 15:39.

Less than a minute later, Melker Karlsson deflected the puck past Blues goaltender Jake Allen for an unassisted goal. Karlsson’s third goal of the playoffs cut the lead in half, 6-3.

Things got physical, as Brenden Dillon and Carl Gunnarsson dropped the gloves. Three penalties were handed out: Dillon and Gunnarsson received five-minute penalties for fighting, while Alexander Steen received a 10-minute misconduct.

The Sharks tried to bounce back in the third, but the Blues took Game 4 with a 6-3 win at SAP Center.

Blues goalie Jake Allen made 31 saves in his first start of the playoffs. Sharks goalie Martin Jones gave up four goals on 19 shots, and was replaced by James Reimer, who allowed one goal on seven shots in his first playoff appearance with San Jose.

The best-of-seven series is tied 2-2.

The Sharks snapped back to reality and shared some gloomy opinions during postgame.

“If we got a point early, it definitely would’ve helped. We would’ve had a little bit of confidence,” captain Joe Pavelski said. “It would’ve been nice, but things happen.”

“We didn’t (quite) execute as well as we have,” goalie Martin Jones said. “They’re a good team and special teams were probably set.”

When asked about the Sharks creating a couple of two-on-one’s in the first period in response to the Blues creating offense, forward Logan Couture responded “Their offense was good. We’ve got to find a way to score.”

Forward Tommy Wingels described Jones’ performance with a realistic answer. “We hung him out to dry tonight. He made some big saves (there) and he gave us a chance, but he kept giving them more opportunities, including the guys along the nets.”

Defenseman Marc-Edouard Vlasic brought up Schwartz and Brodziak when asked about the two-on-one. “Brodziak had no goals leading up to that. Schwartz is a good shooter. I took a chance. It’s a two-on-one. We gave up two-on-one on the power play. . .There’s only so much one can do.”

Coach Peter DeBoer was unhappy but optimistic in his press conference. DeBoer asserted, “We got what we deserved tonight. We’ve had some nights like this in the playoffs and we’ve responded the right way after it. We got a (real) honest group. They know where their game’s at — what’s good enough and what isn’t. We’ll get it fixed.”

Up Next: Game 5 will be held in Scottrade Center on Monday night at 7:00 pm CT.