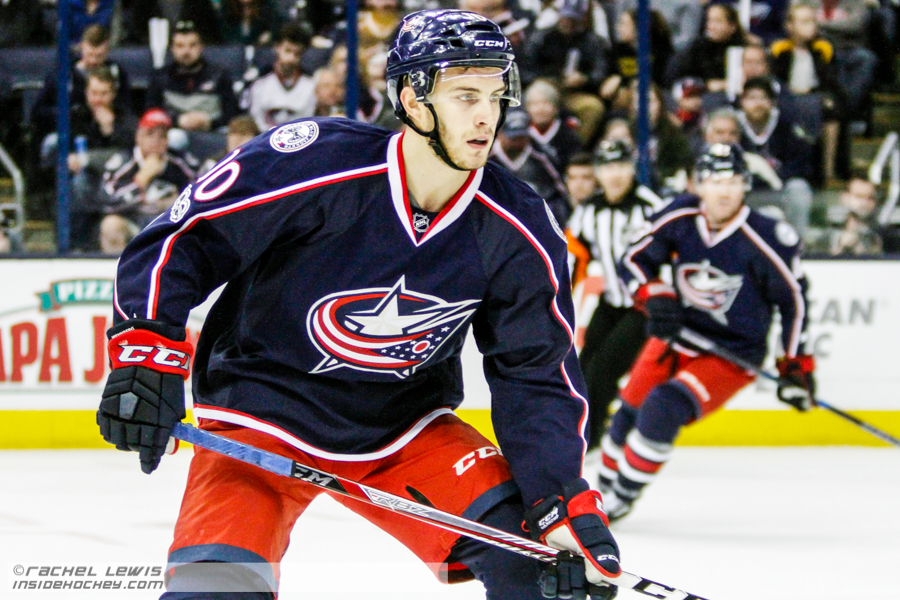 Alexander Wennberg (CBJ - 10) keeps an eye on the play.

Game Four of the First Round Stanley Cup playoff series pitted the talented Pittsburgh Penguins, who finished second in the National Hockey League’s (NHL’s) Metropolitan Division against the upstart Columbus Blue Jackets, riding off of the heels of a record-breaking season on many fronts, including total points (108) and victories, including a near-NHL-record 16-game winning streak thus earning them the Eastern Conference and Metropolitan Division’s 3rd best overall record.

The Pens (Penguins) dominated the first two games of the series, winning 3-1 in Game One and 4-1 in Game Two, both games of which were played at their home venue, PPG Paints Arena (formerly Consol Energy Center). In Game Three, the Blue Jackets came out firing, scoring their first goal eleven seconds into the game and led by the score of 3-1 at the end of the first period. However, the Penguins seized control of the pace and thundered back to knot the score at 3-3, then took the lead, 4-3 late into the contest when Nick Foligno, on a fortunate bounce of the puck, tied the score, 4-4. However, in overtime, Jake Guentzel scored his third goal of the game and the Penguins won the game, 5-4 and took a stranglehold on the series by three games to none.

The Blue Jackets were hoping to feed off of another raucous, standing room only crowd of 19,043 at Nationwide Arena and to mount a comeback on the series for Game Four.

In the second period, the Blue Jackets went up 3-0 on another goal in front of Fleury by rookie defenseman Markus Nutivaara. However, the Penguins tightened the score 3-1 on a Power Play goal by Patric Hornqvist. Late in the period, Evgeni Malkin passed the puck behind the net to Phil Kessel, who fed Ron Hainsey to inch closer, 3-2 to end the Second period. Also, with the Penguins furious push, the shots on goal for the period were nearly identical at 13-12 in favor the Blue Jackets.

The Blue Jackets came out in the Third Period attempting to regain control of the game and scored just 27 seconds into the Third period on a goal by William Karlsson to lengthen their lead on the Penguins, 4-2. The Penguins answered immediately thereafter on a goal by Tom Kuhnhackl to make the score 4-3 in favor of the Blue Jackets. A few minutes after the Kuhnhackl goal, Boone Jenner of the Blue Jackets drove one past Fleury and the Blue Jackets were back up by two goals to lead 5-3. The Penguins made a push late in the game to tie the contest and pulled Fleury with 2:40 to play; however, a bench minor penalty by the Penguins (too many men on the ice) seemingly thwarted any comeback attempt until Guentzel scored his fifth playoff goal with 27.5 seconds to play. The Blue Jackets held on for the waning seconds of the game and survived another Penguins surge and won the contest, 5-4.

With the victory, the Blue Jackets staved off elimination and a series sweep but trail the Penguins, three games to one. Game Five of the series returns to PPG Paint Arena on Thursday night at 7:30 P.M. The Blue Jackets have dug themselves a deep hole and now face an ominous, must-win, three-game stretch if they wish to pull off a shocking comeback, two of which are home contests for the Penguins.