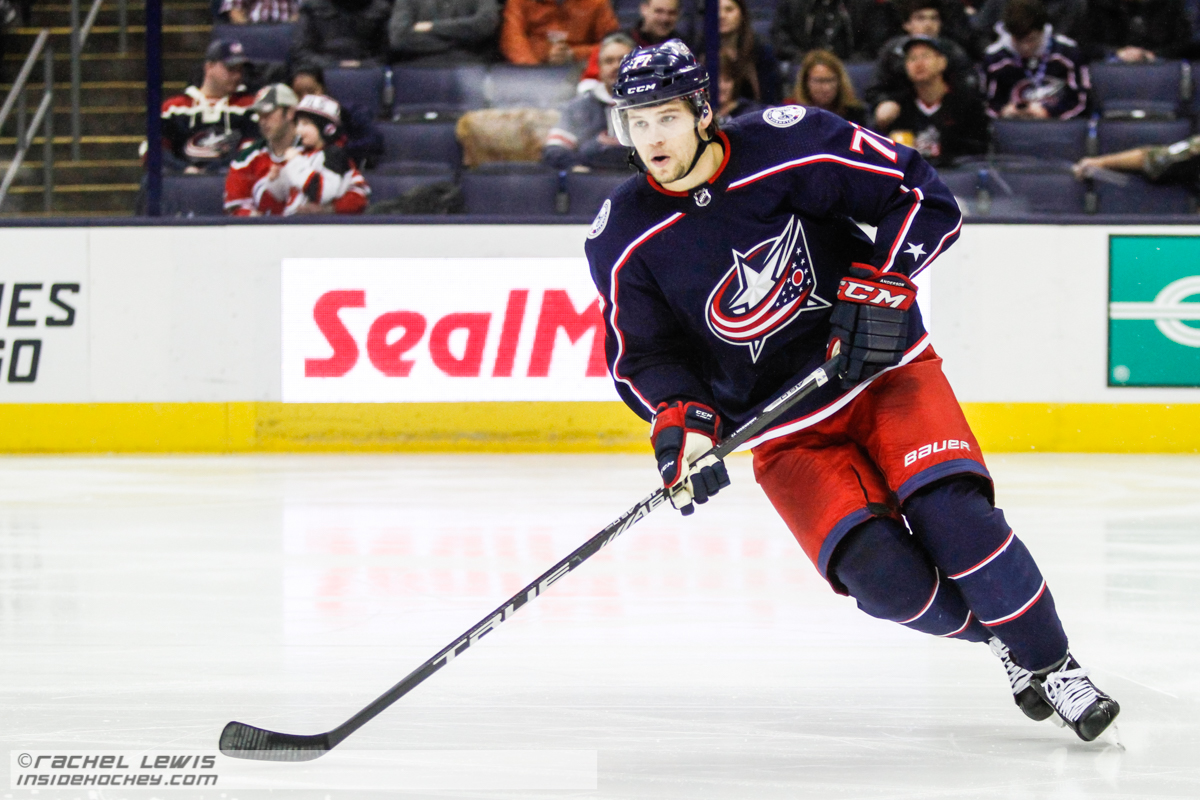 Josh Anderson (CBJ - 77) skates his way through the zone. Anderson had a goal in the game.

Blue Jackets snap streak, get on track against New Jersey

COLUMBUS — It was a matter of time for the Blue Jackets for something, anything, to go right. Finally, a lot more than just one thing went right; against the Devils, everything clicked, starting with the first goal of the game.

When Pierre-Luc Dubois scores, good things happen in Columbus. When the Blue Jackets rookie has scored they’ve gone 8-3-1. His first period tally in Saturday’s night contest, en route to a 6-1 win over New Jersey, set a pace the Jackets are hoping continues following a rough stretch.

With five straight defeats to drop out of a playoff spot, the Blue Jackets need any upward momentum they can get.

It’s a night where a lot of trends were bucked for the Jackets. The team had struggled in second periods, being outscored 60-45 in middle frames. Artemi Panarin opened the scoring in the second, and then a Josh Anderson tally on the odd-man-rush extended it to a three goal lead.

Oliver Bjorkstrand set the cannon off for the fourth time to extend the lead with his ninth goal of the season. In a game where the Jackets whistled 51 shots on net, a season high, and it was a far cry from what they’ve experienced.

By the time Foligno netted the Jackets’ fifth goal of the game in the third period, it was firmly in the home team’s control. Matt Calvert continued the onslaught to make it 6-0.

After Foligno’s goal was disallowed early, there was plenty of frustration on the bench. For a team that’s struggled to score, they easily could have let that set the tone for the game.

“He apologizes,” said coach John Tortorella about the official, Dave Jackson, following the no-goal. “I said, ‘Dave, I appreciate it, but I don’t care!’ He’s such a first class guy. He came up to me towards the third period and apologized again.”

Instead of letting it get to them, the Jackets went out and scored six times again, anyways.

Despite the high goal total, Tortorella wasn’t intending to run up the score. In fact, he had a message for teams that did that to his Jackets.

“I’m not looking to run up a score or anything like that,” he said. “I have had a couple of coaches do it to me this year that I’ll never forget. Someday, I’ll get back at them. I don’t worry about it. You have to have a little respect for the other team.”

Since going 8-4 in October, and then mirroring that record with an additional tie the next month, the Jackets have posted a pedestrian 11-11-3 record heading into Saturday night. Maybe the burst on the offensive end is a sign of turning a corner.