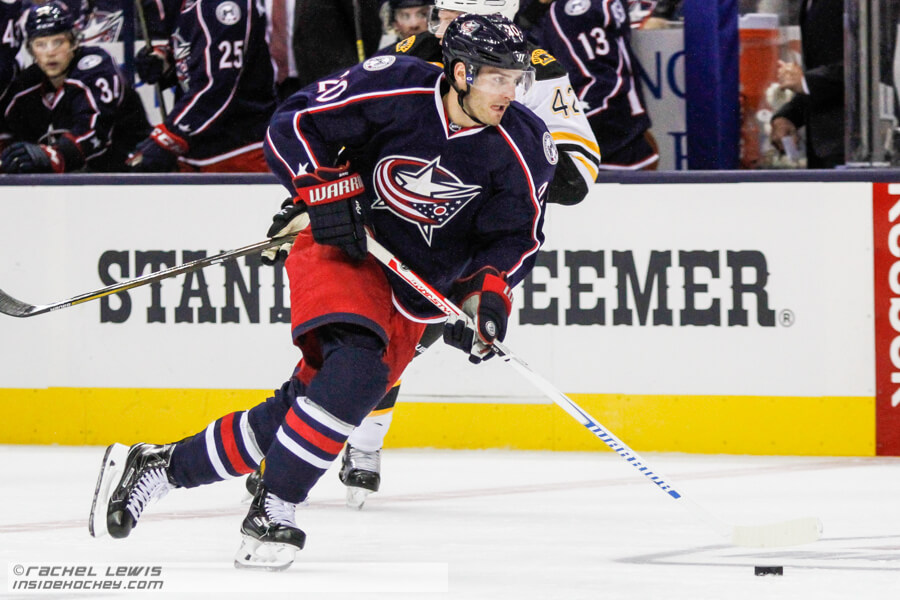 Brandon Saad (CBJ - 20) skates the puck through the neutral zone.

The Columbus Blue Jackets’ start to their 2016-17 season started much like the 2015-16 season did: with a resounding thud. The Blue Jackets were outplayed by the Boston Bruins and the San Jose Sharks in their opening two games of the season, both of which were at their home venue, Nationwide Arena.  And, for a team which experienced a horrific 0-8-0 start to the 2015-16 season, both underwhelming results had a few loyalists counting the number of days until the 2017 National Hockey League (NHL) Entry Draft.

And, with a stern test against the Chicago Blackhawks before embarking on a brutal, four-game road swing, to include one of the top teams in the Western Conference, the Dallas Stars, then to go up against the elite California teams: the Los Angeles Kings, the Anaheim Ducks and the San Jose Sharks, it looked like the Blue Jackets were destined to make another October swoon, nearly dampening their playoff chances before the Thanksgiving holiday.

However, a funny thing happened along the way: the Blue Jackets defeated the 3-time Stanley Cup champion Blackhawks, then played their most complete game since head coach John Tortorella arrived, last season, soundly defeating the Stars, 3-0, then preceded to go 1-1-1 the rest of the road trip to even their record at 3-3-1.

The Blue Jackets then returned to Nationwide Arena and found a way to defeat those same Dallas Stars in Overtime, a game in which they were outplayed for the majority of the game, only to find a way to send it to overtime, then won the game in the extra frame on a goal by defenseman Seth Jones to post a winning record for the first time in Tortorella’s regime.

What’s especially noteworthy about the victory was this was the very type of game that the Blue Jackets, so often in their 16-year history, would succumb to: after outplaying their opponent for the majority of the game, they would surrender late goals and often lose in overtime or the shootout. The victory is also the type of ‘trap game’ that most NHL teams fall victim to: falling flat after a long, successful road swing.

Then, last night, they did the unthinkable: they pummeled the previously 9-0-1 Montreal Canadiens, 10-0 at Nationwide Arena, a game in which every single-game franchise record was set (total goals for, margin of victory, players registering multi-point games).

Although this was only one win and perhaps the greatest of aberrations, the Dallas home victory is the very type of game that signals that an identity may be beginning to be forged with the Blue Jackets.

The usually dormant Blue Jackets are playing a gritty, north-south type of game, the type of game that has only been seen twice in their history: during their 2008-09 and 2013-14 playoff appearances.

However, they’re doing it in ways that are un-chartered territory for the organization.

Even in their two playoff appearance seasons, at best, their blueline (defensive corps) could be assessed as average as well as veteran-laden. However, their current blueline, while learning and a work-in-progress, can be classified as very young, generally fast/skilled skaters and a proclivity for adept puck-moving capabilities.  But what separates this group: much-heralded rookie Zack Werenski, Seth Jones, Ryan Murray, David Savard, Scott Harrington, Markus Nutivaara and (for this group) old-guard veteran Jack Johnson (29) – is their ability to ignite the offense, both on the point and in transition, particularly Jones and Werenski, who registering more than a point per contest (10 points in 9 regular season contests, to date).

Bolstered by last night’s 10-0 drubbing of the Canadiens, the Blue Jackets are currently 3rd in the NHL in goals scored (for) per game with 3.43 goals/game.  And while the defensive corps are igniting the surge, offensively, the Blue Jackets forward lines are certainly aiding the cause.  Alexander Wennberg, who in his prior two NHL seasons had a bit of an aversion to shoot the puck, the usual pass-first Wennberg is tied for the team lead in points with 12 (1 goal, 11 assists) while Nick Foligno also has 12 points (4 goals, 8 assists).  And while Wennberg has been a pleasant surprise and a return to his 2014-15 form has helped team captain Nick Foligno’s renewed confidence, perhaps it’s rookie Josh Anderson’s arrival that has been the most pleasant surprise of all.  The sturdy, tough Anderson has shown an ability to skate well for a large man and is not afraid to go into the ‘dirty areas’ to score goals and points.

Yet the fortunes of the Blue Jackets will rise and fall with the health and performance of Sergei Bobrovsky. And, to date, Bobrovsky hasn’t disappointed with a stellar goals against average (GAA) of 1.79 and a save percentage (Save%) of .947.  For the Blue Jackets to have any chance to compete for a Stanley Cup playoff berth, Bobrovsky will have to stay healthy, something he’s struggled to do during his NHL career, or hope that Jonas Korpisalo can quickly recover from a training camp injury, continue the progress that he made towards the end of last season in relief of the injured Bobrovsky and serve as Bobrovsky’s backup, should Bobrovsky sustain another long-term injury.

The season is quite young and there are 72 games left to play, where injuries and struggles with confidence can enter the fray; however, when compared to the numerous, early-season struggles that have plagued the Blue Jackets during the past several seasons, the 5-3-1 start, particularly when compared to the abysmal 0-8-0 start of last season, offers hope for a return to the Stanley Cup playoff for the NHL’s youngest (average age) squad.