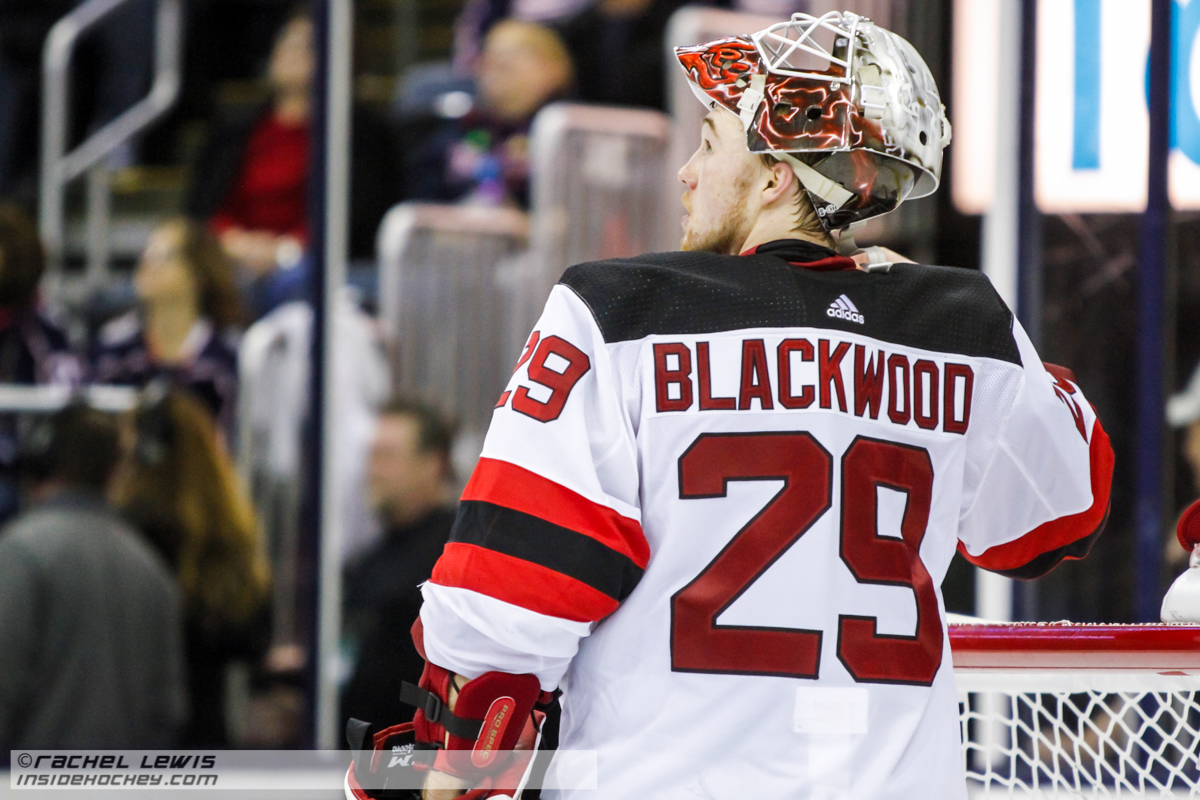 NEWARK–Mackenzie Blackwood has as many NHL wins as he does leagues played in this season–three. It’s part of the 22-year-old goaltender’s journey that has re-energized the club, winning three-straight for the first time since the start of the season.

Blackwood stood tall as the Canucks outshot the Devils 21-13 in the opening 40 minutes, but New Jersey capitalized twice in the first period as Brian Boyle tallied at 12:03 and Miles Wood connected on the power play late in the frame at 18:12 to put the home team ahead by a pair.

Vancouver outshot New Jersey 9-6 in the second, but failed to convert on two power play opportunities, going 0-for-4 on the day. Two quick goals in the third from Sami Vatanen on the power play 1:31 in and then Pavel Zacha at 3:27 all but ended the afternoon’s contest, and saw Canucks’ goaltender, Anders Nilsson suffer his ninth-straight defeat–now 3-8-1 on the season.

Suddenly, the Devils are rolling. Prior to the start of last week, the club had seven wins in 26 games. Now, the club is playing its most consistent hockey since the start of the season. They’ve been able to find the back of the net and have been tighter in their own zone, outscoring its opponent 11-2 in their last nine periods of play. The consistency in goal though has provided that ‘spark’ the team has needed for quite some time.

It’s been an oddity, to see a franchise that has been synonymous with supreme goaltending for the last three decades, to have the troubles that New Jersey has had this season in net. Veteran, Cory Schneider remains winless in the regular season through a full calendar year. Keith Kinkaid, who opened the season 4-0-0 and emerged as the team’s starter, has just one regulation win since Thanksgiving. In three games, Blackwood has made the most of his opportunity in the NHL and has subsequently reinvigorated the club.

“He’s (Blackwood) seeing the puck real well,” said team captain, Andy Greene. “I think we’re just playing a much better defensive game as a team and when he’s needed to make big saves, he has. Like I said the other day, he looks very square, very big and very confident out there. Obviously, he’s a very athletic goalie–you put all those together and he’s playing real well for us.”

Blackwood might be enjoying a 122-minute shutout streak and is the youngest goalie to record consecutive shutouts in franchise history, but he opted to praise his teammates after the game.

“I mean it’s the guys, they’re playing so good for me right now,” Blackwood said. “(They’re) making my job a heck of a lot easier. I can’t even give enough credit to those guys. They’re keeping everything to the outside, clearing the rebounds, limiting second chances and being smart with their puck management.”

Head coach John Hynes noted the areas of consistency as of late including his rookie netminder.

“We need to be a team that has strong goaltending, strong special teams, defends well and has no passengers,” Hynes said. “We had to be more committed in our offensive zone with our attention to details and with some structure things. Our defensemen have done a good job of boxing out and even our low forward that has to play in that area–it’s really a combination of Blackwood making some saves when you do have breakdowns. You’re never going to go through a game and not have breakdown’s, that’s just what the game is. But he’s come up big and made some big saves in those situations and from there we’ve had a pretty strong committment to defense since the break.”

Hynes has been a big believer in riding the hot hand throughout his tenure with the Devils, and right now he has a goalie who looks like he’s on top of the world. Which might make the fact that he’s taking each game, moment-by-moment a good sign for his psychological approach.

“You just try and be as focussed as you can,” he said. “You try and take every shot as it comes and I mean, I’m a big believer in staying in the moment and not getting ahead of yourself–not getting down on yourself or getting too high on yourself. Just take it as it comes and right now, it just feels like I’m seeing the puck well and the team’s playing good in front of me. Things are going good. I can’t imagine they stay this way forever, but it’s just how you handle the up’s and down’s.”