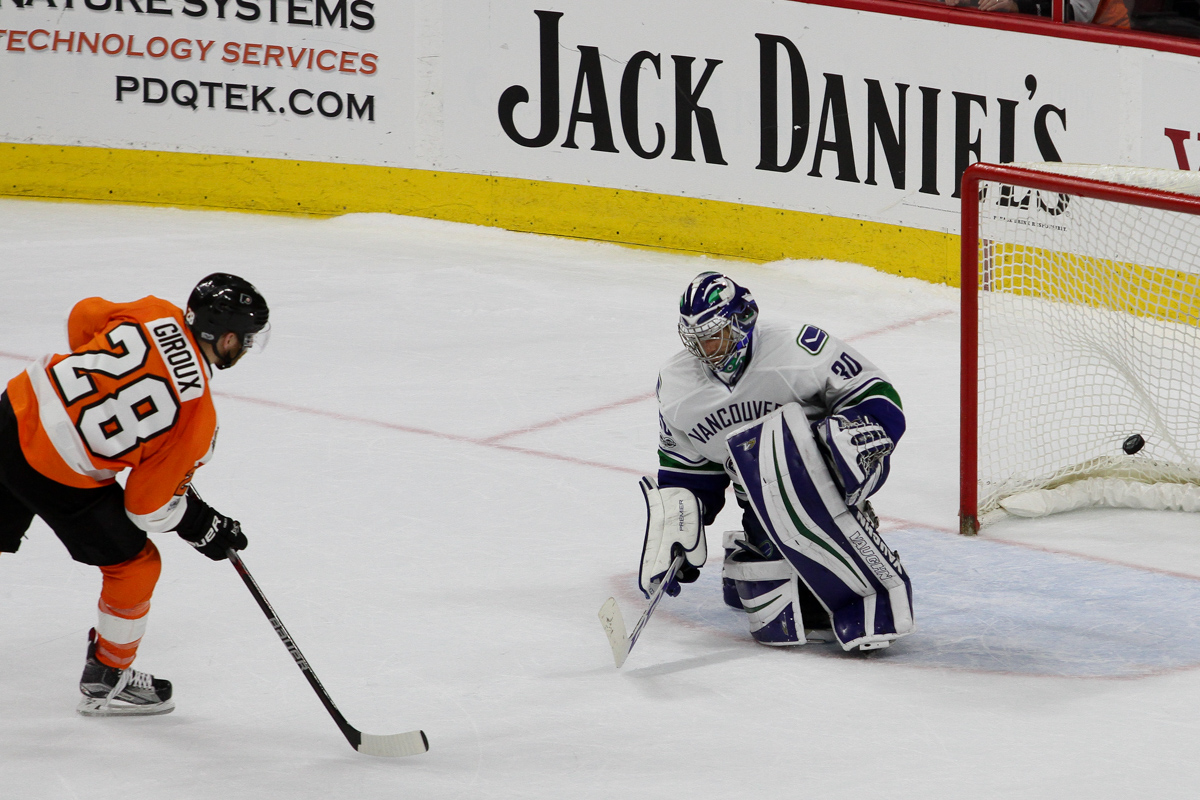 In the span of 24 hours, the Wells Fargo Center played host to an NBA buzzer beater, in which the home team Sixers topped the visiting Knicks on the last play of the game, and the Philadelphia Flyers finished off an exciting overtime shootout with backup goaltender Michal Neuvirth making the game winning save to seal the victory over the Canucks 5-4.

This game was a shootout in every sense of the word. Both teams combined for 73 shots and 9 total goals. The recent streaky play of Flyers’ goaltender Steve Mason led to his benching at the start of the third period in favor of backup Michal Neuvirth. Mason left the game after allowing 4 goals on 24 shots through two periods. Neuvirth came in strong stopping all 14 shots he faced in the third period and all three shots in the shootout to give the Flyers the win. Neuvirth spoke after the game about his preparation and always having to be ready when his number is called:

“I was confident coming into the game and I’ve been practicing well,” Neuvirth said. “Coach [Dave Hakstol] asked me to shut the door and that’s what I did.”

The Flyers were plagued by penalties in the first period committing two 4-minute high-sticking minors by Brandon Manning and Michael Del Zotto giving Vancouver plenty of scoring opportunities on the 5-3 advantage before finally capitalizing on the Daniel Sedin power-play goal (his 11th of the season) to break the scoring open.

With 6 and a half minutes to go in the first period, Flyers’ rookie winger Travis Konecny tied the game at 1s (his 7th) on a beautifully batted down in mid air pass by Dale Weise.

The second period got a little crazy. First, Markus Granlund (his 10th) put Vancouver back ahead 2-1 less than two minutes into the period. A few minutes later, both Pierre-Edouard Bellemare (his 2nd) and Sean Couturier (his 8th) scored within 18 seconds of each other to briefly put Philadelphia back on top 3-2. Only 22 seconds later, Vancouver’s Markus Granlund (his 11th) would tie up the game once again at 3s. And then finally Brandon Sutter (his 12th) closed out the second period scoring giving Vancouver a 4-3 lead heading into the final period.

After this fiasco of a period, Flyers’ head coach Dave Hakstol had seen enough from Steve Mason and decided to make the change to Neuvirth. Hakstol was asked after the game why he made the switch:

Brayden Schenn (his 14th) quickly tied the game up at 4s in the third period where the score would remain the same through the overtime session leading to a shootout.

On his 29th birthday, Flyers’ captain Claude Giroux scored the one and only goal in the shootout, giving his team the all important 2 points in the standings. Giroux talked about how important securing 2 points was in a game like tonight:

“I think our game has been up and down, even tonight, we know we can play better,” Giroux said. “Obviously we got the two points and the result we wanted, but at the end of the day we look at our game again and it must be better. We know that. Just overall, Defense, Offense… everything. We need to play better as a unit of 5.”

After winning 10 straight games towards the end of November and early December, the Flyers had lost 9 of its last 11 games via regulation or overtime/shootout entering tonight. Streaks like these goes to show how difficult and unpredictable each game is, and grabbing 2 points any way it’s presented is an opportunity that cannot be wasted if a team is looking to make the playoffs and beyond.

Due to its 10-game winning streak a few weeks back, the Flyers still hold the #2 Wild Card spot in the Eastern Conference with a 22-16-6 record.

“It’s kind of surreal,” Simmonds said. “It makes me think of when I was a kid watching the All-Star Games and all the great players who played in it. To even be mentioned in the same breath as all-stars in the NHL, it’s pretty special.”

This year’s All-Star Game will be played at the Staples Center in Los Angeles on Sunday January 29th at 3:30pm ET.

The Flyers look to start a new winning streak on Saturday afternoon when the team travels to Boston to face the Bruins. The puck drops at 1pm.