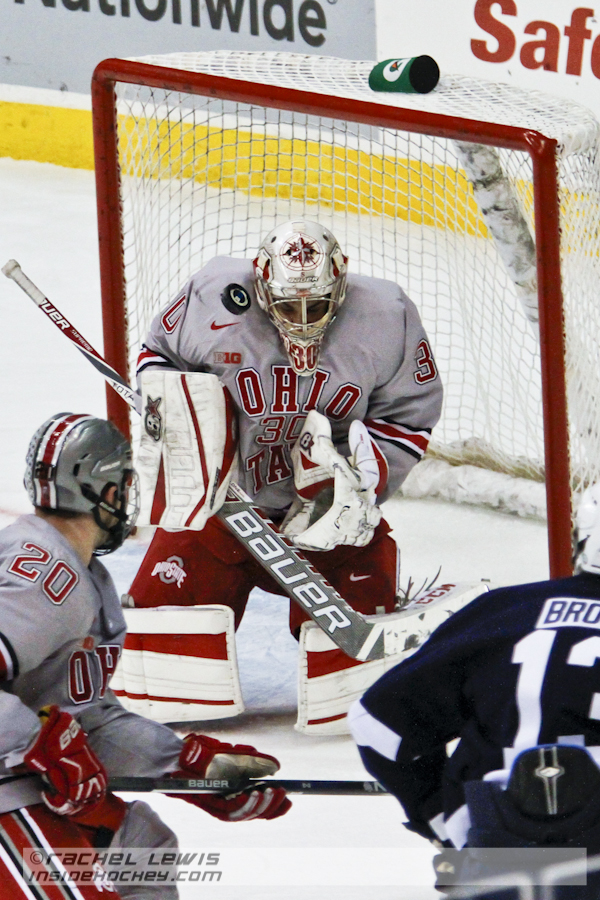 College hockey’s newest conference has plenty of curious storylines to observe before the second half of the season ramps up. Let’s take a look at the teams current positions.

The Big 10 cellar dweller has offered flashes of skill and excitement this season. Taro Hirse is tied for 3rd in points and 1st in assists this season. And the Spartans swept Cornell in Ithaca to offer hope for a return to prominence. However, the team fell on hard times in November, losing six straight to Ferris State, Arizona State, Notre Dame, and Minnesota, and then closing the first half by getting swept by Wisconsin. Michigan State has only been a middling team in both goals for and against, and will need players other than Hirse to step up their play to get out of the conference’s basement. They showed plenty of fight against Lake Superior and archrival Michigan in the Great Lakes Invitational. However, the Spartans have a hill to climb back to the postseason.

College hockey’s best offense has dominated and entertained one of the sport’s newest fanbases. Evan Barrett and Alex Limoges are the nation’s leading scorers with 29 points. The Nittany Lions are averaging 5.22 goals per game, a full 1.10 higher than the second placed St. Cloud State Huskies, and have scored 94 goals, 20 more than second-placed Mankato. However, despite a dominating offense, Penn State is a game under .500 in the conference and one spot above last because of a suspect defense. Guy Gadowski’s squad is ranked 56th in goals allowed and total goals allowed. Peyton Jones will need to improve his save percentage from around .901 and his blue line needs to help him. The nation’s 9th/10th ranked team has only Big 10 games the rest of the year, so there’s plenty of chances to climb the standings.

A surprising Frozen Four run gave the Wolverines hope for a return to college hockey’s pinnacle. Quinn Hughes returning for his sophomore season only added more hype. In spite of that excitement, Mel Pearson’s squad has wildly disappointed. The Wolverines have slipped out of the rankings with a perplexing season. A suspect defense saw them alternate wins and losses in weekend sets with Western Michigan, Lake Superior State, Notre Dame, and Penn State. The team is ranked 47th in goals allowed and does not have a solid goaltender to lean on. Hayden Lavigne was strong in their Frozen Four run last season but has regressed badly. His save percentage is at .883 and freshman netminder Strauss Mann hasn’t performed much better, at .890. It seems increasingly likely that a return trip to the NCAA Tournament will have to come via a Big 10 Tournament win. And that will only happen with improved goalie performance. The offense is fine, sitting in the nation’s top 20, but has more to give with Jake Slaker, Josh Norris, and Will Lockwood helping Hughes along the way. They showed plenty of fight in the Great Lakes Invitational, particularly in a hate-filled matchup with Michigan State, but there is more work to be done in Ann Arbor.

Bob Motzko’s first year in St. Paul has offered more questions than answers through its first half. The Gophers opened with an excellent showing against Minnesota-Duluth but faltered against North Dakota and lost embarrassingly in overtime to St. Lawrence at home. The team’s only middling on both goals for and allowed and the offense, in particular, has plenty to give. Rem Pitlick and Tyler Sheehy have been strong for UM, but there’s not been much scoring depth behind them. Matt Robson and Eric Shierhorn have split time in net, but Robson has earned the starting job and hopes to lift the Gophers back to the NCAA Tournament after missing narrowly last season.

The reigning Big 10 Champions lost significant pieces of their Frozen Four team, but maintain form mostly on Cale Morris’s back. The reigning Richter Award winner has a top 15 save percentage and GAA again and has Notre Dame poised for another run at the Big 10 Championship. Still, the Irish needed to replace some departed key contributors. Justin Wade and Jordan Gross left holes on the blue line that Bobby Nardella and Andrew Peeke have filled. Meanwhile, Jake Evans graduated, but the offense was picked up by veterans Cal Burk, Dylan Malmquist, and Cam Morrison. Notre Dame has long-term chemistry built through long flights back in their Hockey East days, a Big 10 Tournament win last season, and two consecutive Frozen Four rides. Jeff Jackson’s squad is once again a National Title contender and has the pieces to play in Buffalo in April.

The Badgers haven’t been to the NCAA Tournament since 2014. They entered the 2018-2019 season with hopes of bringing the postseason back to the Kohl Center. And so far, they’ve hung tight through the schedule. The Badgers boast a top-20 offense behind freshman revelation K’Andre Miller and sophomores Tarek Baker and Sean Dhooghe. Their offense powered them to an early sweep of Boston College and convincing wins over Penn State and Minnesota. The trouble is consistency. The Badgers have split five series through the first half of the year and need a more stable defense to level out for a potential tournament run. Neither Jack Berry nor Daniel Lebedeff have secured the starting net minder job, and one will have to for Madison to return to title contention and stay atop the Big 10 standings.

Last year’s runners-up in the Big 10 and somewhat surprising bid in the Frozen Four appear headed to another NCAA Tournament. The Buckeyes climbed as high as the nation’s top ranking but sit at fourth before the second half ramps up. As was the case last season, The Buckeyes are a middling offensive unit. Mason Jobst and Tanner Laczynski remain dangers to opposing defenses, but Ohio State’s identity remains its defense. Tommy Napier and Sean Romeo combine for one of college’s best goalie tandems. Napier has gotten the lions share of work, but Romeo led the Buckeyes on last year’s run. Either can win games.