Late September greets early October and it’s a reminder of hockey’s imminent return. The excitement might be unavoidable, but through the lens of a player, the time can be nerve-racking. NHL clubs are mandated to shave their training camp rosters (usually 40-45) down to a final 23. That means many will be told their 2019-20 seasons will start elsewhere.

For most, that’s assignment to the American Hockey League. It’s pro hockey, but there’s some obvious distinctions. There’s no Sidney Crosby or Connor McDavid’s here. Arenas are smaller and so are the salaries. It’s a place to develop and round out your game and it’s helped kickstart countless careers. To the seasoned NHL veteran, the reality of it is simple: it’s a demotion.

Steve Bernier, who boasts a resume of over 600 games played in the NHL, was among the earlier roster cuts made by the Islanders in pre-season. A former first round draft pick, his initial apprenticeship was over a dozen years ago. And while many players in his position might decide not to report, Bernier did. He’s a rare commodity at this level and at this point in his career, but nonetheless there’s an appreciation for the leadership and unmatched experience with triumph and the trying he brings.

“The reason I’m playing? There’s actually a few,” Bernier said after practice with the Bridgeport Sound Tigers, the AHL club he’s been with for the last three seasons. “First, I love hockey still. I enjoy the young guys and being in the room with the guys. I still have the drive that wants me to help the kids.”

Last season, Bernier, Chris Bourque and Stephen Gionta were Bridgeport’s oldest players. Bourque, 33, signed a professional contract in Germany at the end of last season. Gionta, 35, retired and is now working as a pro scout for the Lightning. Bernier, 34, is entering the final season of a two-year contract. It’s a two-way deal as well, meaning he’ll make a designated AHL salary of $225,000 this season. It’s a substantial difference from the $650,000 he’d make in the NHL this year. But money isn’t a driving force for him, showing players what it takes to make that next step is a source of fulfillment at this point in his career.

“There’s only one way to show them it’s not going to be an easy path,” he said. “If you keep playing hard, playing within your role—good things will happen. It might not happen this season, but you know you got to be consistent in what you’re doing.

“It’s not an easy thing to be here because you’re in the minors. Everyone wants to be in the NHL and everyone thinks—and should think—that they’re capable of playing in the NHL. But it (the AHL) is not a bad league to be in. Sometimes you wait here a little longer, you can improve a lot and be a better player overall.”

He knows that the wait for him might be long and perhaps fruitless. Since joining the Islanders in 2015, he’s played 34 games including playoffs in the NHL and 163 in the AHL. He categorized a potential call-up as “a long, long shot.” 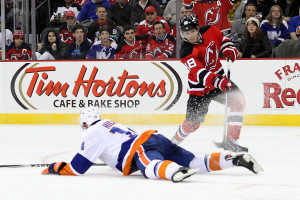 Still, the 13-year veteran plans to play out the rest of the season. He’s embraced the role of being a leader and sharing his experience with among many things, adversity. While any career has its ups and downs, Bernier’s came on the biggest stage and under the brightest of lights.

For the city of Los Angeles, June 12, 2012 will be a date etched in the city’s sports history. That night, the Kings won the franchise’s first-ever Stanley Cup in a six-game series against Bernier’s Devils.

Though he started the season on an AHL contract after failing to secure a spot while on a training camp tryout, he eventually earned a contract, call-up and by the start of the playoffs, a full-time spot on the team’s fourth line, where he, Gionta and Ryan Carter formed the Devils’ fourth line. The trio played a crucial role in getting the sixth-seed Devils passed the Panthers, Flyers and Rangers and into the Stanley Cup Final. After facing a 3-0 deficit, they rallied twice against the Kings before a dramatic conclusion in game 6.

Ten minutes into a 0-0 first period, Bernier boarded Rob Scuderi. The collision rocked the Kings defenseman into the boards and to the ice, where blood began to cover part of the ice. When he got up, his face sported a deep cut on his nose.

Bernier was tossed from the game, assessed five-minute major and game misconduct. On the ensuing extended advantage, L.A. tallied three times to take a decisive first period lead that they’d build upon the rest of the night, a 6-1 final to close out the Final. The forward, who watched most of the game from his team’s dressing room still wears that game even seven years later.

“I still think about it, to be honest,” he said. “It was not an easy moment, it’s still not an easy moment. But, at the same time, you play the game hard, you want to do everything you can to win the game and sometimes the line between something awful and a good play is very thin.

“You worked so hard to get to that point and to lose that way was extremely hard. But, there’s no way for me to get that back. You need to be strong mentally and try to focus on the positives and try to get back to the level you were at that year and not make that mistake again.”

For now, with the 2019-20 season on the horizon, it appears Bernier is mostly at peace with hockey. After all, he’s still doing what he loves. He’s also found a niche as the team’s elder statesman. And, not unlike his younger teammates, he’ll grind it out in hopes of that NHL call-up.

Alex Ovechkin’s two-goal night puts him just six goals away from tying Gordie Howe’s record of 801 goals. Additionally he is now just one goal short of 500 even-strength goals. Only three other players have reached this milestone: Wayne Gretzky (617), Gordie Howe (566), and Jaromire Jagr (538). The visiting Washington Capitals defeated the Philadelphia Flyers by a score of 4-1 during regulation.