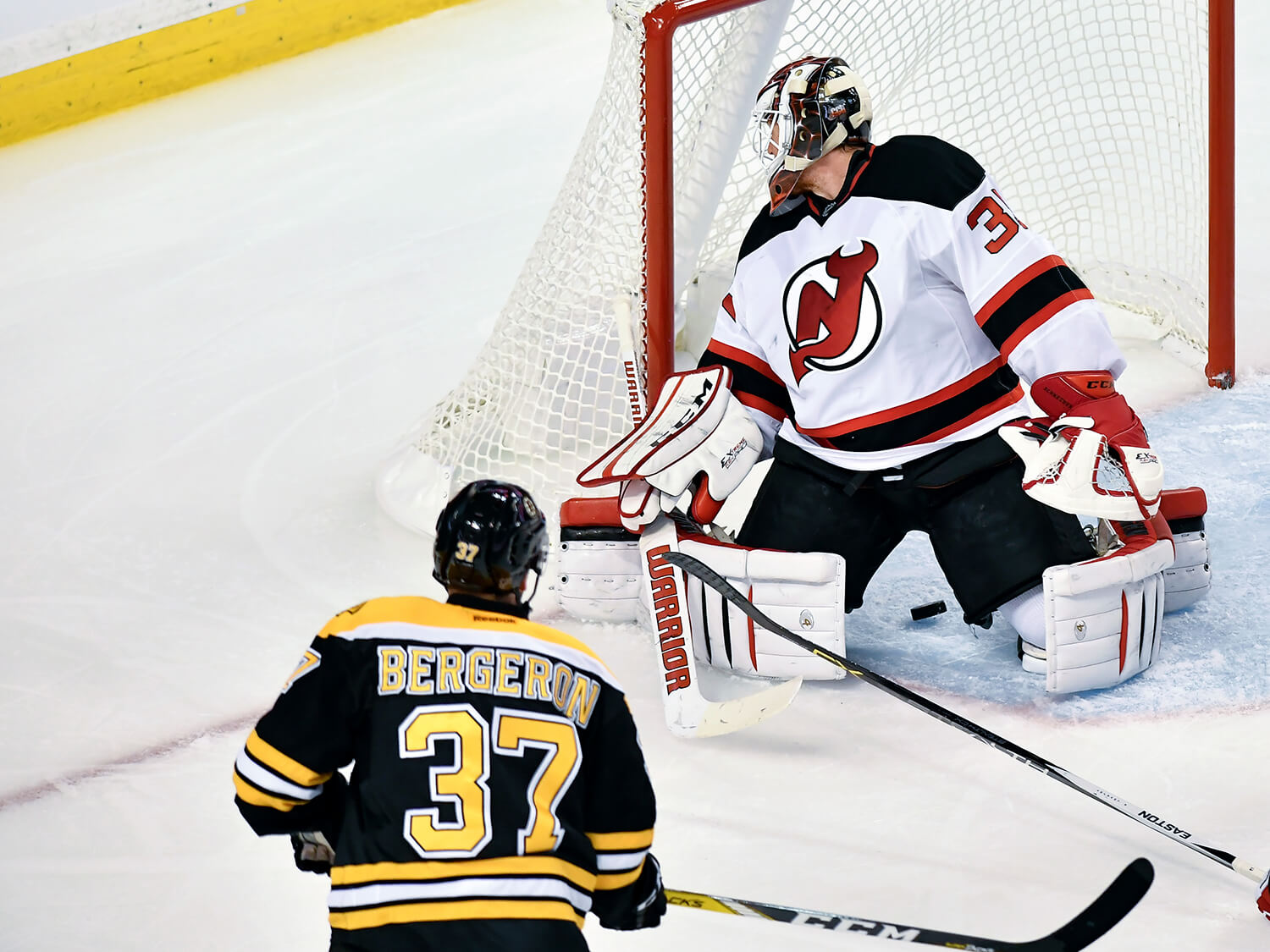 New Jersey Devils goalie Cory Schneider (35) looks for the puck after a shot from Boston Bruins center Patrice Bergeron (37) during a NHL game.

Patrice Bergeron is back.

The Bruins top center returned to the lineup in time to play in front of the TD Garden crowd and score the game winning goal in a 2-1 victory over the New Jersey Devils for the team’s third victory of the season.

“That’s what he has always been,” said coach Claude Julien after the game. “A clutch player for us.”

Led by its top line playing together for the first time this season, the Bruins were able to score two late third period goals to improve its record to 3-1-0 on the early season.

“We’re growing as a team,” said Bruins goalie Tuukka Rask. “But right off the bat when everybody showed up we looked like we were ready to go; and that’s a good thing.”

The early portion of the contest saw the ice tilted in the direction of Cory Schneider, but Boston was unable to take advantage of several scoring chances. A second period power play and consequent 5-on-3 proved the best opportunity, but New Jersey was able to kill it off and outshoot the Bruins in the second period.

A hooking call against Bergeron early in the third gave New Jersey its first lead when Kyle Palmieri’s shot from the blueline deflected off Brandon Carlo’s skate. The shot came right after Devils defenseman Damon Severson kept a bouncing puck onside to preserve the chance, and also moments after Taylor Hall missed a wide open net right at the goal mouth.

That’s when Marchand sniped his way into the scoreboard.

Marchand’s shot midway through the third period beat Schneider, who to that point had made 31 saves without surrendering a goal.

“I wasn’t trying to pick that corner, but I was trying to shoot through his legs and hope it went on net and either it went in or we got a rebound and try to create something,” Marchand said.

The turning point in the game was Marchand’s goal, but he also assisted on the eventual game winner. Marchand was able to find an open Bergeron in the slot with a little over one minute left in the game who beat a scree ned Schneider. Pastrnak kept the play alive by winning a battle behind the net and passing the puck to Marchand.

“You want to start the season and go on the first road trip with the team. It wasn’t easy at all,” Bergeron said after the game. “There was a lot of pulling on my side to be back. But, we looked at the big picture and this was more reasonable.”

The Bruins return to the Garden ice on Saturday night to face the Montreal Canadiens and will look for their fourth victory. Now with the lineup getting closer to being intact, not only can they try to move their momentum forward, but build off of what they did on the ice Thursday night.

“We do have a lot of chemistry; every time I come around the net, I know he’s [Bergeron] going to be hovering in that area,” said Marchand. “So it’s good to get back to playing together and get closer to having our full lineup.”