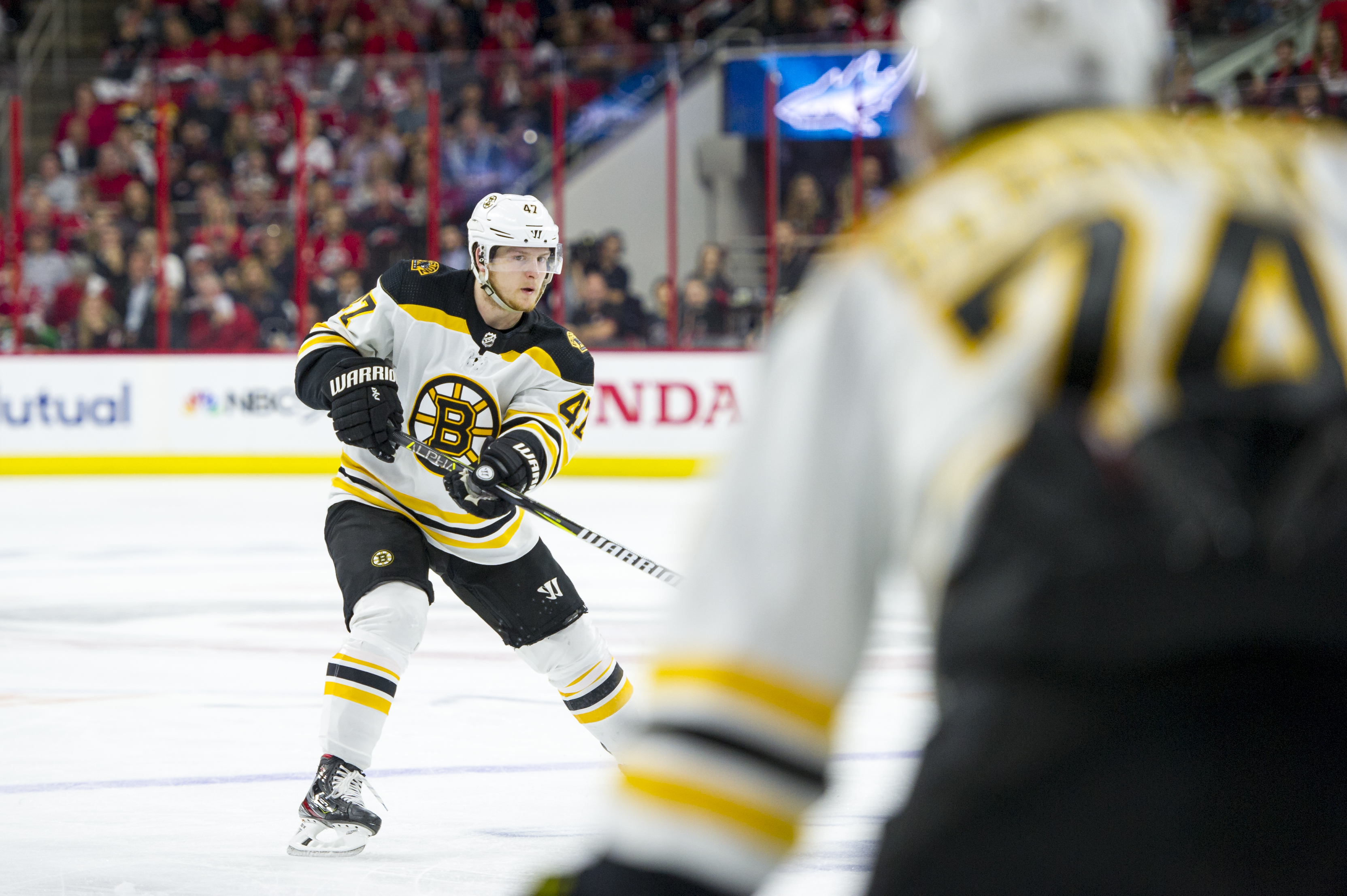 Boston Bruins defenseman, Torey Krug (47), passes the puck on the power play during the first period of Game Three of the Eastern Conference Finals between the Boston Bruins and the Carolina Hurricanes in the 2019 Stanley Cup Playoffs.

St. Louis, MO — The last time Blues fans had gathered at Enterprise Center, the Clarence Campbell Bowl was handed out and “Gloria” rang throughout the title-starved city. The fans reconvened on Saturday, June 1st, which was supposed to be a blessed night in St. Louis. The Blues were hosting their first home Stanley Cup Final game in 49 years and had a chance for control of the series against Boston. The teams hit the ice to a perfectly executed light show and tribute to the Blues of the past. The crowd wanted a win. Instead, the Bruins made their own history with their most dominant effort of the series to silence the raucous atmosphere and take a lead of their own.

The Blues dominated the first four minutes of the game. Jake DeBrusk took an ill-advised kneeing penalty 1:02 into the game and St. Louis peppered Tuukka Rask with three shots in the first man advantage. Boston weathered the storm and sent a much improved “Perfection Line” to slide the shot counter their way. Near the frame’s middle point, the dam broke. David Perron took an interference minor at the 10:26 mark. Twenty-one seconds into the power play, Patrice Bergeron tipped home a Torey Krug shot and gave Boston a lead they’d never relinquish. The goal was Bergeron’s ninth of the playoffs and 40th of his career. He’s now tied with Johnny Bucyk for fourth in Bruins playoff goal scoring, only behind Rick Middleton, Phil Esposito, and Cam Neely.

The onslaught continued when the Bruins found some transition space to work with. The sequence ended with Charlie Coyle’s ripping home his eighth of the postseason with 2:20 left in the frame. If the crowd wasn’t quite yet, Sean Kuralay finished the job. He tracked a puck off Joakim Nordstrom’s skate at the blue line and wired the puck under the bar for a 3-0 lead with just 9.2 seconds left in the frame. Craig Berube challenged the call for a potential Nordstrom offsides but the challenge failed. Kuralay’s fifth goal of these playoffs and the 3-0 Bruin lead stood at intermission while St. Louis lost its challenge, crowd, and momentum.

The second period did not start much better. St. Louis took a bench minor on the failed challenge and the Bruin power play clicked again when David Pastrnak lasered home his eighth goal of the postseason 41 seconds into the frame. St. Louis regrouped and did give something for their sold-out crowd of 18,789 to cheer. The Blues fourth line clicked with Zach Sanford finding space on the goal line extended to feed Ivan Barbashev to break the shutout on Barbashev’s third goal and Sanford’s first career NHL playoff point. The surge in crowd energy was short-lived, though. Colton Parayko took a foolish high-sticking major at 11:41 of the second. Thirty-one seconds into the power play, Torey Krug took a smooth Brad Marchand feed, walked in, and roofed a shot on Jordan Binnington.

The fifth Bruin goal chased Binnington for the first time in these playoffs. The rookie goaltender from Toronto stopped 14 of the 19 shots he faced, his weakest performance of a young playoff career. Jake Allen came on in relief and faced just one shot to close out the frame at 5-1 Bruins in the lead.

Allen performed well in the third and gave his offense time to respond. They did show signs of life up front. Boston took four penalties in the third period. On the third, a Zdeno Chara roughing call, Colton Parayko uncorked a beautiful shot to clear Rask and cut the lead to 5-2. St. Louis got no closer. The Blues ran out of steam and allowed two final goals in the last two minutes. Noel Acciari and Marcus Johannson deposited the final tallies and ended the scoring at 7-2. Boston has now played three Stanley Cup Final games in St. Louis and has scored at least six goals all three times.

The offensive output saw a few major Bruins set some historical precedent. Patrice Bergeron’s three-point night lifted his career playoff point total to 102, tied with Phil Esposito for second in Bruins playoff scoring history, behind only Ray Bourque. Torey Krug also walked away with some history. He recorded a four-point night with three assists and his power-play goal in the second. The Michigan State alum is the first Bruins to ever hit that milestone. Neither were particularly keen on spending any time on the personal milestones. Bergeron simply said “That’s news to me. Obviously, you have to respect Mr. Esposito and everything he accomplished in his career. It’s an honor.” Krug was even more direct in not concerning himself with the personal marks. “Ask me again in a week or so when I’m able to really soak it in and appreciate it all.”

Tuukka Rask stopped 27 of 29 shots faced in the Bruins net. He took plenty of rushes and hits from an aggressive and physical Blues squad but handled himself well in a physical affair.

St. Louis drops to 5-6 at home. Boston climbs to 6-2 on the road this postseason.

“We do have to limit the penalties, for sure,” explained Blues Head Coach Craig Berube after the game. “We know they have a dangerous power play. We’ve been flirting with danger here the whole series and it burned us (Saturday). But in saying that, we’ve got to do a better job killing (the penalties). We didn’t, and that’s why they won the hockey game.”

Boston went 4-4 on the man advantage with 4 shots across all the power plays. They were a combined 2-10 across the first two games of the series.

The Bruins now lead the series 2-1. Game Four is on Monday at the Enterprise Center. Puck drops at 7 pm CT, 8 pm ET.