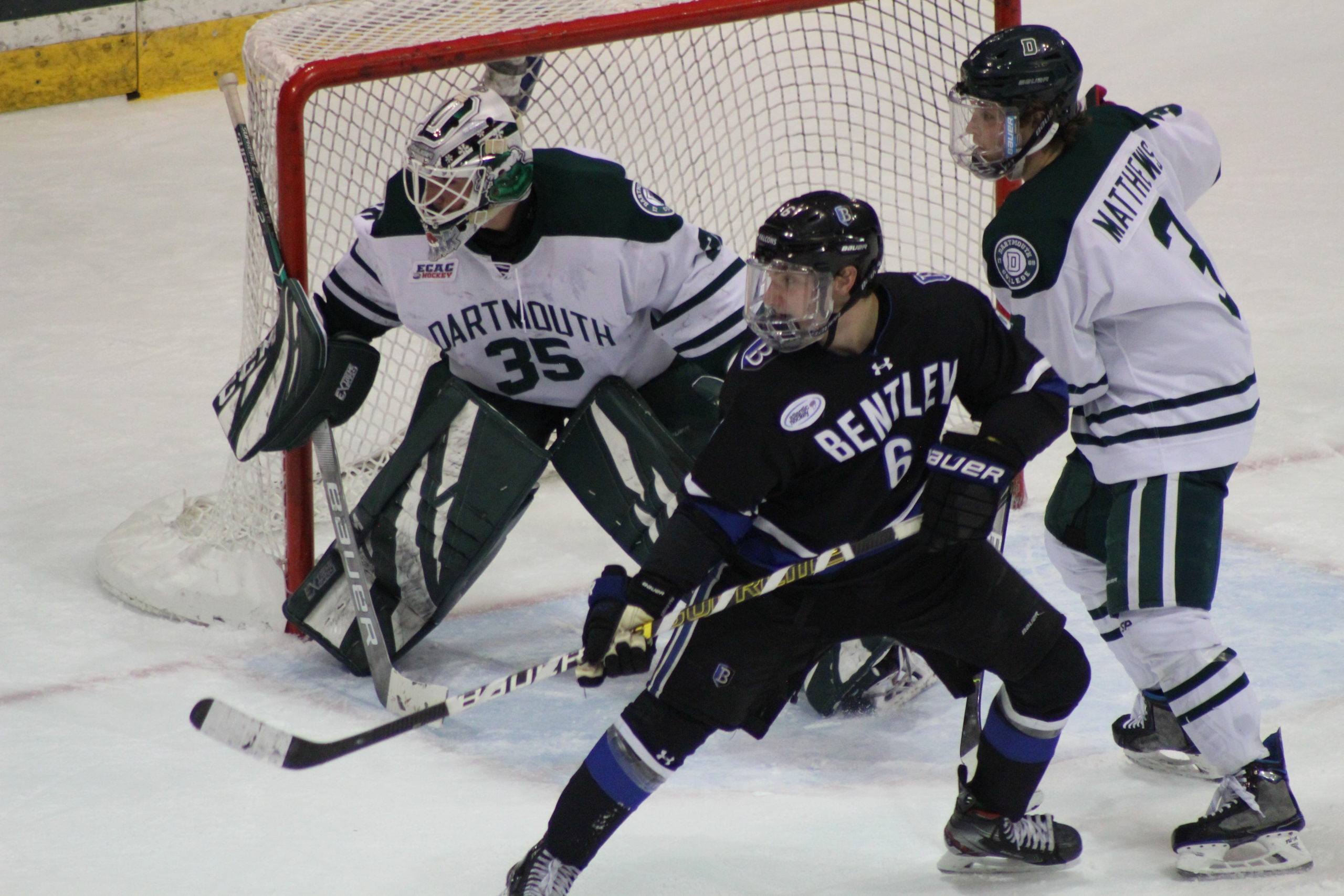 Hanover, NH — The fifth all-time meeting between the Bentley University Falcons and the Dartmouth College Big Green did not disappoint as the Falcons hung around long enough to tie the game at 2-2 with just over two minutes remaining. Four third period penalties against the Big Green altered the flow of the game but it was an exciting contest nonetheless. 1,175 in attendance got their money’s worth for Thursday night NCAA action. The last two meetings between the two schools have ended in ties, with Bentley tying each game in the waning moments.

Dartmouth was all over Bentley to start the game. Drew O’Connor had two early shots turned aside by senior Aidan Pelino. Bentley’s Brendan Hamblet had a mini breakaway on Adrian Clark at the other end but shot high over the shoulder of the Big Green keeper.

Six penalty calls in a 10-minute stretch from 7:24 to 17:22 opened the ice up for the two teams to play. Holding on Bentley’s Hunter Toale gave Dartmouth the first crack at the power play. Matt Baker and O’Connor traded scoring opportunities down low but were unable to put the puck past Pelino.

Ethan Roswell was sent off for Boarding at 8:19 to give the home team a five on three power play. It only took Jeff Losurdo fourteen seconds to pop a rebound past Pelino giving Dartmouth the 1-0. Losurdo’s third goal of the season was assisted by Tanner Palocsik and Sam Hesler.

A Slashing call on Dartmouth’s Collin Rutherford at 9:31 negated the remaining power play for the Big Green. The resulting four on four and subsequent power play gave Bentley some momentum that they maintained throughout the period. Bentley had two shots knocked away by Clark.

Junior Luke Santero was called for Hooking at 11:38. O’Connor had a stuff attempt at the right post kept out by Pelino. A scrum ensued and Baker and Jakov Novak were sent off for Roughing at 12:50.

At 17:22 Dartmouth’s Hesler was sent off for Elbowing. The Falcon power play had good puck movement and steady pressure in the Dartmouth zone. Bentley’s senior captains Ryner Gorowsky, down low, and Brett Orr, at the blue line, each had two chances along the left side of the offensive zone. Clark was able to turn aside all four bids that Bentley threw at him. The first ended with Dartmouth outshooting Bentley 16-10.

The first half of the second period was a fast-paced, physical game that saw both teams buzzing along unable to take control. That was until Dartmouth built on their lead at 10:01 when Hesler banged home a Paloscik feed from behind the Bentley net. The goal was Hesler’s first collegiate goal, with the assists going to Palocsik and Brendan Demler.

An Interference call on Dartmouth’s Christian LeSueur at 10:27 gave Bentley another chance on the power play. This time the Falcons would not waste it. At 11:18 Will Garin one-timed a Novak feed past Clark cutting the lead to 2-1 Dartmouth. Setting up a shot at the left post of the Dartmouth goal, the sophomore from Mound, MN was all alone to catch the Novak pass from the top of the right circle.

Dartmouth carried play for a solid few minutes with roughly four or five minutes left in the period but were unable to capitalize. Bentley hung tough and threatened as time wound down in the middle frame. The Falcons outshot the Big Green 9-7 for the period. Dartmouth controlled the face-off dot 23-17 through the first two periods.

The third period saw Hesler penalized for Hooking at 2:13. Dartmouth was able to limit the Falcons to only one shot on goal.

Bentley appeared to tie the game at the 7:00 mark when Jonathan Desbiens tucked the puck between Clark’s pad and the post. The play was called no goal and reviewed, the call on the ice was confirmed.

A Hooking call on LeSueur at 10:24 put the Falcons on the power play once again. Again the Big Green held firm and kept Bentley from getting a shot on goal. The Falcons carried play but were unable to garner significant scoring chances.

At 13:58 as Bentley was whistled for offsides, an inadvertent trip by O’Connor on the Falcon puck-carrier as players eased up led to a Tripping call and a Falcon power play. Despite the call, Dartmouth had a short-handed two on one rush for Cam Strong and Daniel Warpecha.

Dartmouth center Matt Baker was called for Elbowing at 17:06. Bentley used their time-out. Again Strong had a short-handed bid while killing off the man advantage. Dartmouth’s penalty kill luck would run out at 17:55 when Novak dished from the top of the right circle to a wide open Desbiens at the far post. This time the senior from Montreal would be credited with the goal on his one-timer. Tie game 2-2. Quin Foreman had a chance to pull ahead as time ran out but Pelino was there to make the stop. Each team had six shots a piece in the third period.

In overtime, the two teams traded chances early. A Holding penalty on Paloscik at 2:25 gave Bentley a power play but that was quickly negated three seconds later when Matt Gosoewski was sent off for Tripping. During the four-on-four, it was end-to-end action with Dartmouth’s Baker and O’Connor almost connecting to end the game.

A Hooking call at 4:02 on Desbiens gave Dartmouth a brief man advantage. The Big Green had a flurry in front of the Falcon net just as the game was to end. Baker had a shot turned away by Pelino and the rebound was sitting in the slot but O’Connor was unable to connect.

“I thought it was a hard fought battle. I thought both teams battled hard,” said Bentley’s Ryan Soderquist. “I was proud of our guys. We had a really slow start. We’re in finals this week, our bus was waiting for seven or eight guys to get there so we could leave to come. And we started really slow after we got through that first 10 or 12 minutes I thought we got our feet underneath us and we started skating and it was a good game from there.”

“They score on the five on three, but overall even just surviving the first 10 minutes because we didn’t have our legs. We got some big saves, so to be down only 1-0 it gave us an opportunity to come back and get going.”

“It was one of those games where there wasn’t much flow right from the get go,” said Dartmouth coach Bob Gaudet. “The game was called a lot differently than most ever game. There was a lot of penalties. I didn’t think it was a real physical game, there were just a lot of penalties. It was kind of one of those ones where you just have to grind it out. I thought our kids played really hard. We didn’t end up on top but we didn’t end up on the bottom either. It was a tie game just like it was last year. Their a good team, and I enjoy playing them. They play the game, they’re quick, they’re skilled and I thought their goalie played a great game.”

For Bentley, they are off until December 28th when they travel to Bridgeport, CT to take on Atlantic Hockey rival Sacred Heart. Puck drop for that one is 1:05 pm. Meanwhile, Dartmouth travels to Boston to take on Northeastern on Saturday at 4:00 pm at Matthews Arena.