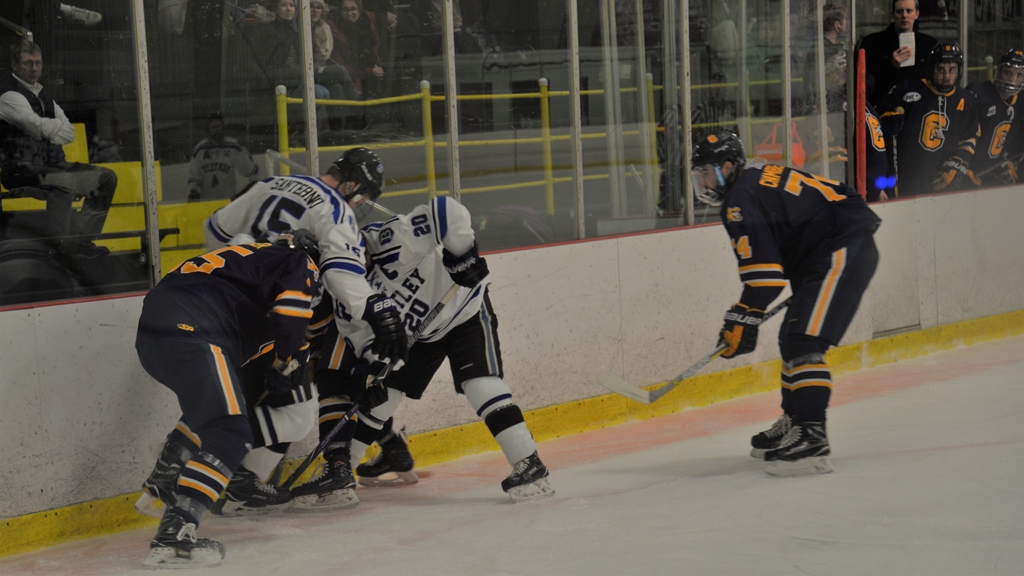 Watertown, MA- Canisius College has been a favorite for the Atlantic Hockey Conference’s automatic bid most of this season. The Golden Griffins have performed admirably all season, holding the best record in the conference late in January. Unfortunately, the Griff’s inconsistencies are starting to show more clearly. The team has struggled to sweep teams in weekend series and gain the points needed to increase their AHC lead.

Those issues were on display in their weekend matchup with the AHC’s last-place team, the Bentley University Falcons. On Friday night, the teams staged an excellent duel at the John A. Ryan Arena that ended with a 3-2 Canisius win. Unfortunately, Canisius didn’t start the second game at the JAR well and dropped their final trip to Bentley’s soon to be old home.

The Falcons started hot, outshooting Canisius 7-3 in the first 7:17 and 13-8 for the opening frame. The Golden Griff’s goaltender, Daniel Urbani, mostly did a good job stopping shots in the frame, but couldn’t stop Matt Sieckhaus’s left circle shot for a 1-0 Bentley lead. Canisius switched momentum for the second stretch of the first, but Aiden Pelino stopped all eight shots he faced and ensured his side the momentum entering the first intermission.

The Falcons kept pounding Urbani and were rewarded late in the period with smooth passing. Defenseman Tanner Jago found Kyle Schmidt in the slot and the senior forward fired the puck by Urbani for a 3-0 Falcons lead. 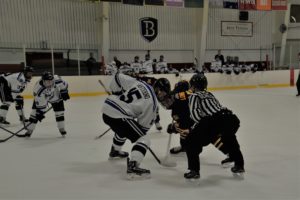 Canisius flipped the script in the third period, almost forcing overtime. The Golden Griffins outshot the Falcons 10-3 and did not commit a single penalty while Bentley committed two. The first power play did not result in a score. The second one did. Brett Orr was whistled for tripping. Canisius mashed the puck by Pelino to get the team on the board. The officials reviewed the play and awarded the goal to senior captain Ryan Schmelzer.

With under four minutes left, Canisius coach Trevor Large pulled his goaltender for the extra offense. With 1:07 left in the game, Schmelzer netted his second goal of the period and gave his team life. The Griffins did not get another shot on net, and the game ended with Bentley winning 3-2.

Bentley climbs to 8-13-6 overall and 5-11-5 in Atlantic Hockey. The Falcons travel to Henrietta, NY, to play the Rochester Institute of Technology Tigers next weekend.  After next weekend, the Falcons will close John A. Ryan Arena with a series against the Air Force Academy, then open brand new Bentley Arena against Army. First, though, puck drops at the Gene Polisseni Center at 7:05 pm on both Friday, February 2nd and Saturday, February 3rd for the RIT series.

The loss drops Canisius to 13-11-2 overall and 13-7-0 in the Atlantic. Even with the loss, Canisius stays in a tie with Holy Cross for first place in the conference. The Golden Griffins return home next weekend to host those Holy Cross Crusaders to determine first place in the conference. Puck drops at 7:35 pm on Friday night and 4:35 pm on Saturday afternoon at the Harborcenter in Buffalo, NY.