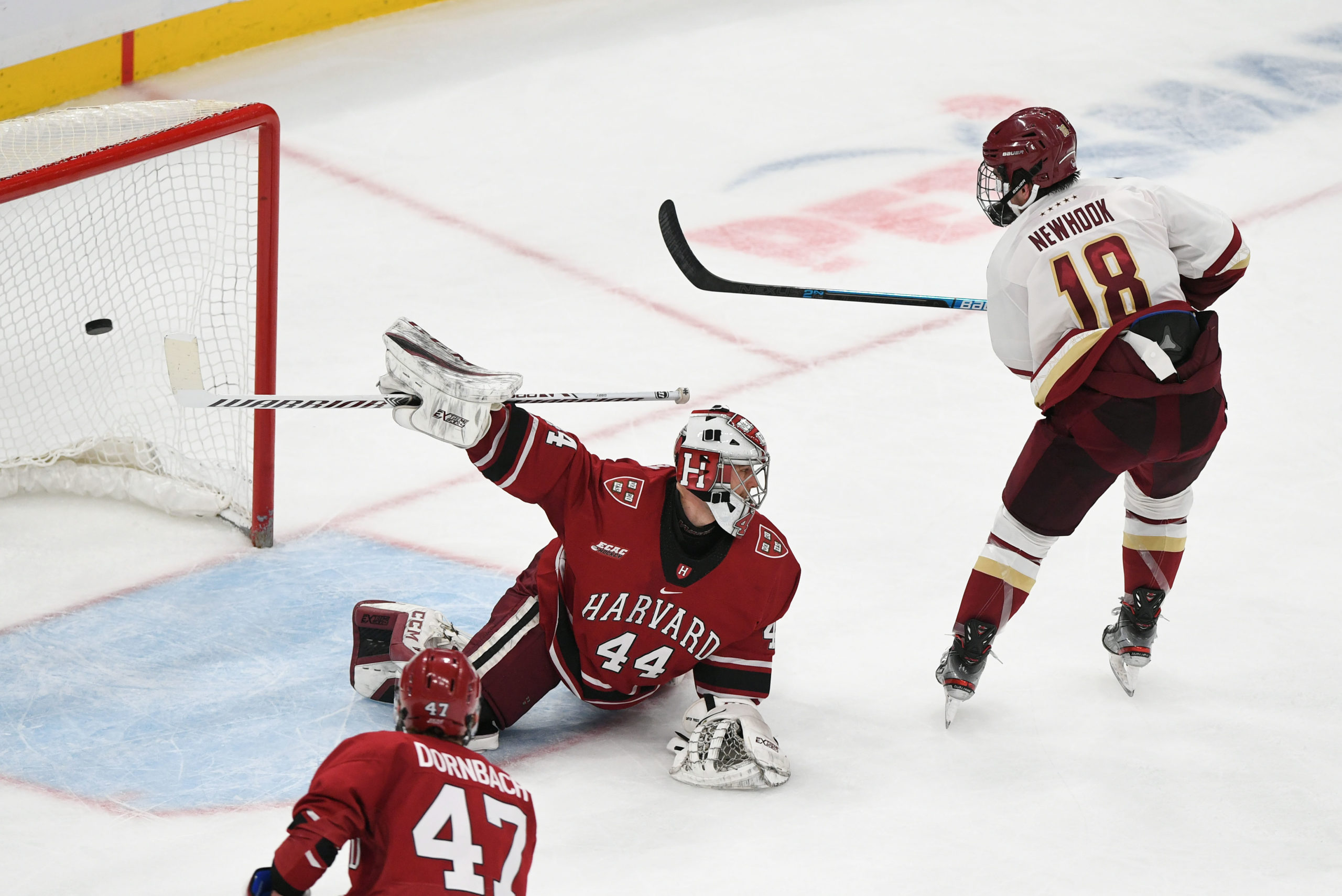 BC Throttles Harvard in Beanpot Consolation

Boston, MA — The Boston College Eagles soared to a lopsided 7-2 victory over the Harvard Crimson in the consolation game of the 68th Annual Beanpot tournament. Four second period goals by the Eagles was enough to put the game out of reach.

Sophomore Jack McBain had two goals, freshman Matt Boldy had three points, while classmate Spencer Knight made 26 saves to pace the Eagles to their 17th win of the season.

Boldy was whistled for Slashing just: 56 seconds into the game giving the nation’s top power play the first man advantage of the game. Casey Dornbach capitalized at 2:13 when his slapshot from the right circle beat Knight giving the Crimson the early 1-0 lead. The goal was the 11th for the sophomore from Edina. MN. Jack Rathbone and Nick Abruzzese were credited with the assists.

Senior David Cotton tied the game for the Eagles at 14:11 when his wrist shot at the right side of the net whizzed past Mitchell Gibson. Julius Mattila and Logan Hutsko assisted on the game-tying goal. For senior defenseman Mattila it was his 100th career point in a BC uniform.

Boston College extended their lead after a shot by McBain was initially saved by Gibson but the rebound caromed off of defenseman Marshall Rifai at 17:59.

At 5:53 Logan Hutsko cashed in on a breakaway attempt. Hutsko caught the Crimson on a line change as he took a Ben Finkelstein pass into he Harvard zone to beat Mitchell on the backhand.

Harvard answered with pressure as Dornbach struck iron midway through the period.

Graham McPhee was whistled for Hooking at 11:43 putting the Crimson back on the man advantage. Junior defenseman Rathbone lost possession of the puck at the BC blue line and Alex Newhook was off to the races. The Eagles took firm control of the game at 12:22 when Newhook’s backhander beat Gibson for the 4-1 lead. The short-handed goal was the 13th goal of the season for Newhook.

Just over a minute later Rathbone would fan on pass attempt at the BC blue line and this time the Eagles had a three on one in on Gibson. Senior Luke McInnis carried into the Crimson zone and outlasted a sliding Crimson defender to feed McBain with a cross-ice pass for the 5-1 lead at 13:41. McBain’s short-handed goal was his sixth of the season and second of the game.

R.J. Murphy answered for Harvard at 13:54 when his wrist shot from the right face-off dot beat Knight under the arm. Murphy’s sixth goal of the year was assisted by Rifai and Jack Badini.

BC added a late goal by Newhook with twenty-five seconds left in the second period. The Eagles once again caught the Crimson with an odd-man rush. Freshman Michael Hardman carried into the offensive zone, looked off the lone defender and fired a pass to Newhook that buried from the bottom of the right circle.

Harvard came out in the third with senior Cameron Gornet in goal. Gornet made six saves on seven shots. The lone goal of the period came at 5:16 when Hardman and Boldy were in on a two on one. The Harvard defenseman attacked Boldy, who deftly slid the puck ahead to Hardman who beat Gornet left side slamming the door shut on this one.

BC thoroughly dominated the game, outshooting Harvard 37-28 and winning the face-off battle 33-22.

“It wasn’t a well-played game by us,” said Harvard coach Ted Donato. “We didn’t really make team that is very skilled and offensive work for their opportunities. Several breakaways and two on one, two shorthanded goals, are not a recipe to beat a top tier team.”

“The focus wasn’t there,” added Donato. “The fact that they (BC) lead the country in shorthanded goals, not really creating offense for them, and we did. We gave them two shorthanded goals, several bad line changes and things that are very controllable. We just didn’t execute some simple things. They’re a good team, a very skilled and talented, and again I just don’t think we made them have to work to get those great chances. If you give them chances they have too many guys that can finish. It’s a tough one to swallow but we’re a resilient group, we’ll try to take a deep breath and we have a big weekend moving forward.”

“I thought we played sixty solid minutes,” said BC coach Jerry York. “Harvard’s missing one of their very best players, the Walsh (Reilly, out with a lower-body injury) boy so that certainly affects their play. I thought the stretch with the two shorthanded goals was kind of the turning point in the game.”

“I liked the fact we were down 1-0 and we were able to come back on that,” said York.

“It’s an important game for us, in the pairwise, we’re disappointed we’re not playing for a trophy tonight at 8 o’clock but we don’t shy away from that fact,” added York. “We didn’t get a chance to do that tonight. You have those two goals, win trophies in our league but also trying to qualify for the national tournament. So we succeeded in one of those.”

Harvard is currently in fourth place in the ECAC. As Donato alluded to, the Crimson have a big conference game on Friday night against rival Yale as well as Saturday night against Brown. Both games are at Bright-Landry Arena and have a 7:00 pm EST puck drop.

The Eagles meanwhile sit in fourth place, tied with Maine, in Hockey EastHplay. BC faces-off against Merrimack in a home and home series. Friday night at Merrimack’s Lawler Arena and Saturday at home at Conte Forum. Friday is a 7:00 pm EST start while Saturday at Conte is at 4:30 pm EST.