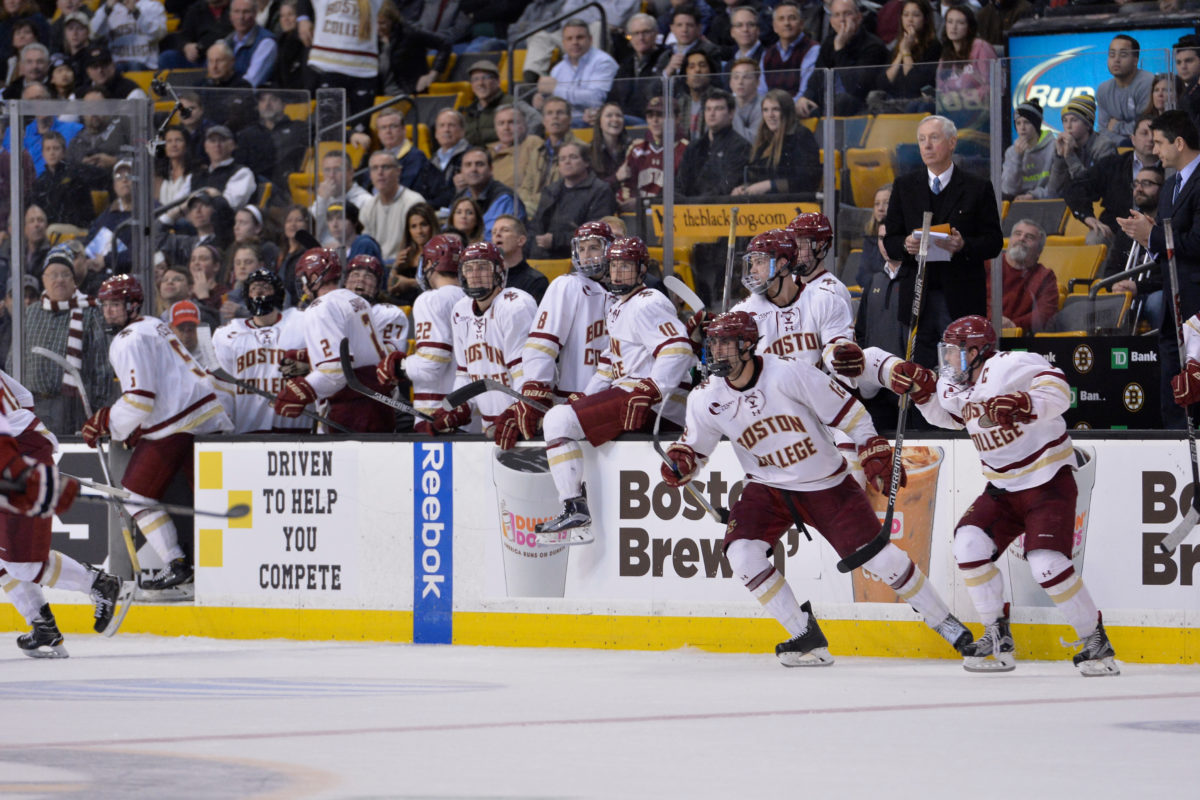 Lowell, MA- Tsongas Center has long been a house of horrors for the Boston College. The Eagles had lost five of their last seven games in the UMass Lowell home building and hadn’t won a game there since Parker Milner posted a 38 save shutout in a 1-0 victory on October 26th, 2012. On Friday night, BC appeared in for another long night off the drop but rallied for an important Hockey East win.

Carl Berglund tracked a fortunate bounce off the glass to the crease and scored his 10th goal of the season for a Lowell lead 36 seconds into the game. UML continued their pressure and beat Spencer Knight with a Charlie Levesque goal 1:11 into the night. Lowell pressured the Eagles for the rest of the period for a shot lead of 13-7 and a 2-0 lead at the break.

Lowell continued their shot domination in the second, but showed cracks in their game. First, the RiverHawk power play faltered and failed to generate much consistent pressure. On one particularly sloppy play, BC bounced on a turned over puck and after a Ron Greco drive on net, Marc McLaughlin cleaned up the loose puck in Tyler Wall’s crease to get the Eagles on the board 11:04 into the 2nd. Four minutes later, St. John’s, Newfoundland, native and freshman Alex Newhook sliced his way through the Lowell defense and fired a dart to tie the game 2-2.

The third period was even, but saw BC’s high end talent show off. Junior forward Logan Hutsko muscled his way through Lowell’s defense and punched a puck through Tyler Wall for a 3-2 Eagles lead.

“He’s gotten a lot stronger,” Eagle Head Coach Jerry York said of his star winger. “He took a big hit earlier in the game, handled it and came back. It reminded me almost of the Providence goal he scored last year in OT in the playoffs.”

BC staved off the remaining Lowell pressure and secured a 3-2 victory over the RiverHawks.

UML stays at home for a Saturday night tilt with near-by rival Merrimack. Puck drops vs the Warriors at 7 pm ET.

Spencer Knight stopped 34 of 36 shots in another show stealing effort.

“They’re built to get off the mat,” observed York. “Down 2-0 early at a visiting rink against a good team. You can talk about X’s and O’s, but the ability to stay up and say ‘Hey, we’ve got a lot of hockey left’ is key.”

BC returns home for a date with ancient rival Boston University on Saturday night. On the quick turnaround and getting excited for that matchup, York explained “That’s easy. No extra motivation needed there.”

Puck drop between the Eagles and Terriers at Conte Forum is slated for 7 pm ET.