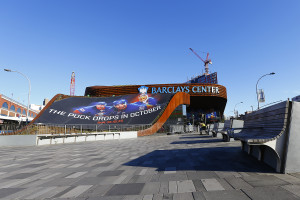 The New York Islanders kicked off a new era in the team’s history with a 3-2 overtime loss against the defending Stanley Cup champion Chicago Blackhawks at the Barclays Center Friday night.

Overall, the Islanders new home received mixed reviews from fans, many of whom road the Long Island Rail Road to the game, a big adjustment for fans in Nassau and Suffolk Counties used to a short car ride to the Old Barn in Uniondale.

The team informed fans that they should be in their seats at 7:15 for the pre-game festivities, but the pre-game celebration was much shorter and lower key than expected.

The video tribute to the late Al Arbour was also short but well done. It did, however, seem a bit out of place before the national anthem rather than after Alexa Ray Joel’s rendition of the Star Spangled Banner.

The fans were certainly vocal. They cheered their team with the usual enthusiasm and were able to make a lot of noise inside the new arena.

Like most new arenas, the Barclays Center is spacious, clean and offers great food choices and amenities. However, like most new arenas, there are plenty of empty seats down low at ice level while the less expensive sections up top were completely filled. That is just the economics of professional sports in 2015.

The issue of obstructed view seats is not going away any time soon. Some fans tried to move to empty sections in an attempt to see more of the ice. It will be interesting to see how well the limited view seats sell over the course of the season. Yes, the arena was not built for hockey, but it is still a nice place to watch an event.

There were plenty of familiar touches from legends like Billy Smith, Bryan Trottier, Mike Bossy and Bobby Nystrom taking part in the ceremonial puck drop to the familiar goal horn which the team restored after complaints from the fans. The organ playing of Paul Cartier also made the new building feel more like home as he played familiar tunes with his usual flair.

However, the fans were a bit negative at times. While they cheered their team, they enthusiastically booed Brett Yormark of the Barclay’s Center when his image appeared on the scoreboard. Rightfully or wrongly, many fans view Yormark as someone who is eager to change or eliminate many of their treasured traditions. The balancing act between old and new is a difficult one and Yormark and the rest of the leaders at Barclays will not be able to please all of the people all of the time.

Some fans also voiced their displeasure at the elimination of the Ice Girls who did not follow the team to their new home. Whenever the new coed ice cleaning crew took to the ice during TV timeouts, they were greeted by chants of “We want Ice Girls.”

There were times that the fans were a bit unsure about their new surroundings. They seemed tentative early in the game, but by the third period when the tempo picked up and they got a bit more comfortable in the new building, they were very loud.

“I think the fans were fantastic tonight,” Isles forward Matt Martin said after the game. “It was a loud building. I didn’t think it would be as loud as it is. Our fans bring a lot of energy. They bring that spark and it’s a lot of fun to play in front of them.”

The biggest issue may be the ice quality, but that may also be the easiest problem to fix. It’s something the NHL and the staff at Barclays Center will have to work on as the season progresses. The ice was slushy according to the players and that did create some issues for both teams.

“I don’t think the ice was the greatest today and it got slower as the game went on,” Isles captain John Tavares admitted.

The Islanders played a solid game and picked up a point in the standings. It was only fitting that Tavares got the first Isles goal in the new building which brought the crowd to its feet.

In the end, fans got to watch a good hockey game between two quality teams. They saw their Islanders earn a point and the LIRR got fans to and from the game safely and in a relatively timely fashion. The Barclays Center may not be home sweet home, at least not yet. But given time, both the players and fans will get familiar with their beautiful new arena which allowed the team to stay in New York and start a new era without abandoning their loyal fan base completely. Tonight represented the start of a new relationship between the Islanders and their fan base. Both the organization and their fans will grow more comfortable in their new surroundings as the season progresses.