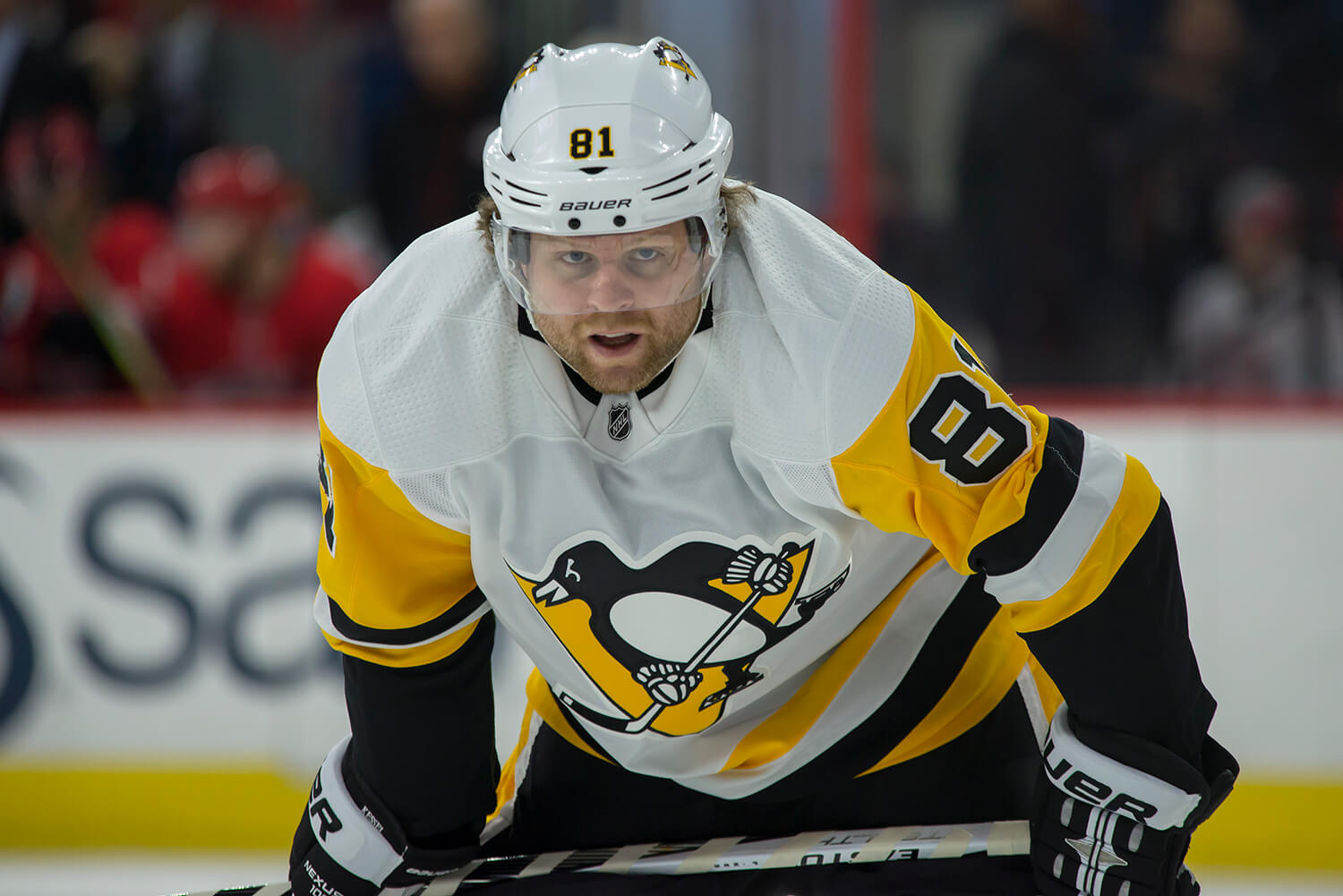 PHIL KESSEL (81) lines up for a faceoff versus the Carolina Hurricanes. The Hurricanes beat the Penguins 2-1 in Regulation.

What do you call a two-headed monster that’s sprouted a third head? A nightmare for opposing goaltenders.

The Penguins and their fanbase have been fortunate to have superstar centers Sidney Crosby and Evgeni Malkin for well over a decade. This year, winger Phil Kessel, a superstar in his own right, is making a case to be included in the same breath – and the same monstrous nickname.

The stats are certainly gargantuan. Kessel has been the Penguins’ best and most consistent player all season, and he’s making a run at no less than the Art Ross Trophy as the league’s leading scorer. As of Sunday, his 63 points in 54 games were three points behind Tampa’s Nikita Kucherov, who has two games in hand.

Malkin and Crosby, though, aren’t far behind. Both have found another level since the ball dropped on 2018.

Malkin’s goals have been timely with three game-winners, including one in overtime. More than a third of his shots are going in with a shooting percentage of 34.9 percent, and he’s challenging Alex Ovechkin for the Rocket Richard trophy with 29 goals to Ovechkin’s 32.

“I try to be quiet; I try to play hard every night,” Malkin said. “I feel so good the last month – no injuries, great shape. Just play my game.”

The new year has also been good to Crosby, whose 23 points (3G, 20A) are just behind Malkin’s pace. Twelve of those (1G, 10A) have also come on the power play, and he’s just coming off of an 11-game scoring streak.

Malkin, Crosby and Kessel are 1-2-3 in the NHL in 2018, and the Penguins have benefited. Their 10 wins since Jan. 1 are tied for first in the NHL, and they’ve vaulted from outside the playoff picture to, before a 3-1 setback at New Jersey Saturday, as high as second in the Metro division.

Those 10 wins and 20 points in just over a month account for a third of the Penguins’ 29-win, 61-point totals this season.

“We’re back to playoffs and we have more confidence right now,” Malkin said. “It’s more fun.”

Much of Pittsburgh’s fun this season has been driven by its power play, which is producing at near-historic levels. It’s been at or near the top of the league all season, with 51 goals and a 27.6 percent conversion rate. No team has finished above 27 percent since the 1989-90 Calgary Flames (27.7).

And, much like the three-headed monster that makes up three-fifths of its first unit, the Penguins’ power play has found another level since Jan. 1. Since then, it’s converting at a 36.6 percent clip and has accounted for 15 goals.

Even their coaching staff hasn’t seen anything quite like it.

“I haven’t been around [a power play] as dynamic as this one,” head coach Mike Sullivan said. “I think what makes them unique is their instinctive play. We try hard to stay out of the way, and I mean that sincerely. If you’re not careful, you can overcoach a little bit and get in the way of that instinctive play.

“They certainly have a framework, and we prepare them with some structure, but I think what makes them unique is their ability to move out of that structure and just create the way they do. We have some dynamic players, and they’ve been together for quite some time, so they’ve evolved as a power play group.”

But it’s not all instinct, Sullivan said. Even the star players do their homework.

“They go to school on penalty kills,” Sullivan said. “We joke in our coaches’ room sometimes, because we have a special teams meeting in the morning and we’ll show the pre-scout of the other team’s penalty kill. But the real meeting takes place after the meeting, when the players get together and they start talking about what they saw, what the coaches said and what we can exploit.

“That’s what I love about those guys. They’re really engaged in the process themselves.”

Another key to the Penguins’ success has been their balance.

Crosby has been playing on a top line with rookie Dominik Simon and Conor Sheary (now on IR) or Bryan Rust. Malkin anchors a second line that normally includes Carl Hagelin and Patric Horqnvist. Kessel and Jake Guentzel play on the third line with center Riley Sheahan.

“That’s the biggest thing we like about it. I think we’re harder to play against when we create the balance,” Sullivan said. “Someone’s going to get an advantageous matchup. When you look at our top nine – or, right now, our top 12 – they have the ability to score goals.

“We really like spreading the talent we have and creating the balance we have. I think there’s an element of team speed that’s on every single line.”

The balance also gives them versatility.

“I can move Sid or Geno at the odd time into the other lines,” Sullivan said. “For example, if there’s a handful of penalty kills and Riley Sheahan is killing a fair amount of them, I might throw Sid or Geno between Jake and Phil, or [on the fourth line]. Then, all of a sudden, those lines become a serious threat. Situationally, it gives us some options on the bench.”

If Malkin wins the goal title, he probably has the reconfigured lines to thank. He and Kessel have found much success together over the past two seasons, but splitting them up has Malkin shooting more.

“We can play them against anybody, and Geno becomes the most dangerous threat. We want him to shoot the puck. When he gets opportunities, he’s got to think shoot the puck first, and let those other guys hunt rebounds or go to the net or create their offense off of that. He’s thinking shoot more, and the puck goes in the net for him. He’s as good a scorer as there is in the league.”

The Penguins’ 1-2-3 punch has them in a much better position to earn the chance to defend their back-to-back championships this spring. Still, in a division where good teams are going to miss the playoffs, they can’t afford to get comfortable as they head down the stretch.

“With all these division games [coming up], we’re going to be tested night after night,” Crosby said. “It’s a great opportunity. We’ve done a lot of good things and, when the game, the intensity, the emotion escalate, you want to be able to raise your level as a team. Good teams are able to do that.”