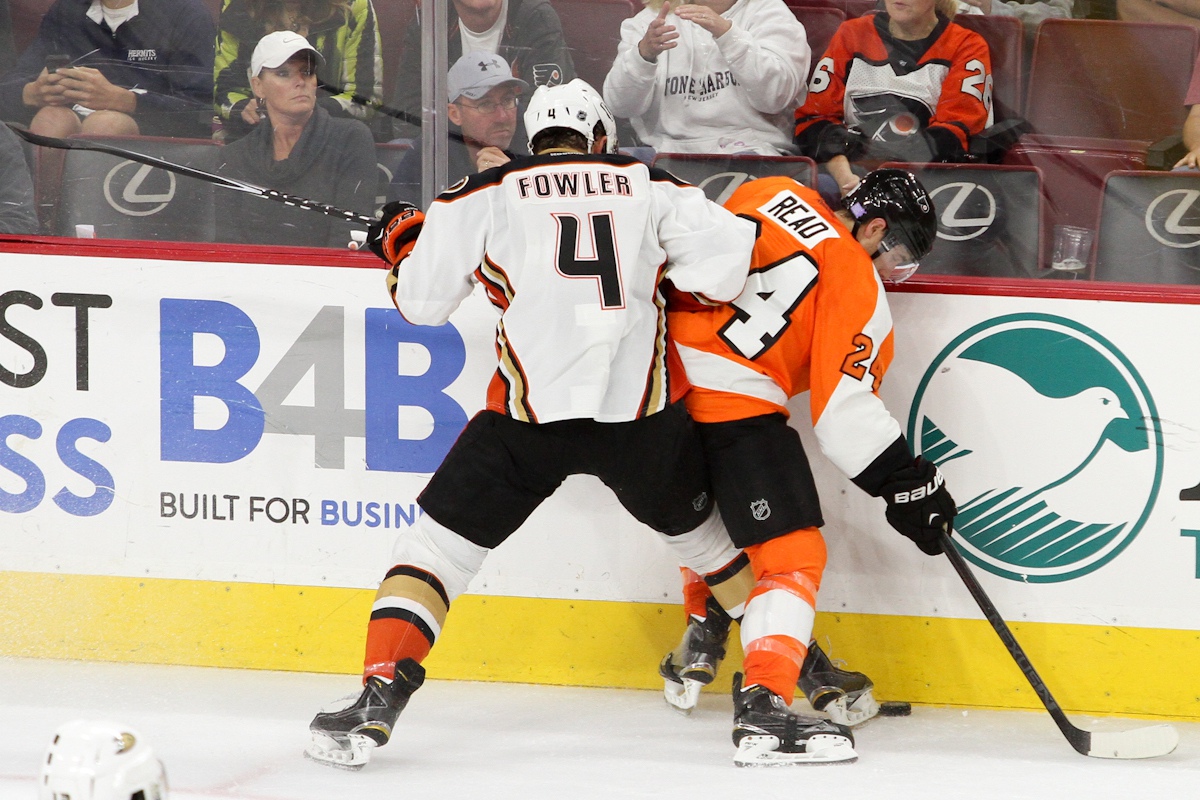 Generally speaking, you don’t go to an Anaheim Ducks game to admire the defensive corps. Not that they’re not good. But the team has, for as long as they’ve been successful (say since about 2003) been focused on offense. OK, that’s kinda wrong. Think about the Cup year (2007). They had Pronger and Niedermayer. So check that and say it this way instead: since the Ducks lost those two great defensemen, they’ve been a team that sold tickets via offense rather than defense, and there’s nothing wrong with that.

This year, their D corps is almost entirely comprised of the same guys it was last year. The starters for every game thus far have been these, and mostly in these pairings: Fowler and Lovejoy; Beauchemin and Lindholm; and Stoner and Vatanen. Their coach, Bruce Boudreau, said on Sunday evening, “I want them all to be Bobby Orr all the time, but it’s a bit of a process.” How much of one? A quick diagnosis and evaluation might be in order.

Of those names mentioned, just one is unfamiliar to Ducks fans from last year: Stoner. He’s wearing the lowest number of any Ducks’ roster player, 3, and he was drafted by Minnesota in the third round, 79th overall, in 2004. He came to Anaheim as a free agent this July 1st. He has over 230 NHL games under his belt, which if you do the math means that he hasn’t been in a full season, ever. In fact, he had four with Minnesota where he got about 50-60 games, but that’s the extent of his experience.

He is, however, the kind of big body the Ducks need on their blueline. He’s 6’3” and 212 lbs., which complements Beauchemin’s 6’1” and 208 lbs. and makes up for the relatively slight size of Vatanen at 5’10” and 180 lbs. Stoner’s partner is Vatanen, and IH had the chance to talk to that youngster on Sunday about his role in their pairing:

“I think we had some good chemistry going there, like, from the first day. We speak a lot in the locker room and try to get better every day.” I asked whether before the season, he knew anything about Stoner. “I have to say, no, I haven’t ever seen him play or like that, but a little bit before the season we were skating here, so kind of like we could know each other.”

Vatanen said that he found out who his partner was, “On the gameday, who is next to you. You never know who is going to be there, and we’ve been doing some good job right there, so I hope we can keep going.”

“I’m a little bit more offensive defenseman, but I have to do my job in the own zone, too” he said. That is easier when the Ducks do what they did to the Blues Sunday evening, pinning the puck in their zone. And, said Vatanen, it’s easier now than it was last year, because offensive new addition Kesler makes it possible, especially on the power play, to have confidence to jump up, because everyone feels confident that the puck will not be lost.

But whatever that feeling might be, this is not the tower of power approach to D that the team used, of necessity, when Pronger was in Anaheim. This defense, rather, is mobile and dangerous offensively, as if the spirit of Scott Niedermayer were informing everything they do. But it’s also balanced, because those pairings put one fast and dangerous offensive threat with one more quiet and defensive guy on each of the three. How often do you find that in the NHL? Vatanen told IH about that: “It helps that one plays bold and the other one plays the more stay-at-home like type of game. I think it helps both of us.”
Having three evenly matched pairs is not the norm, though most clubs might wish it were so. Usually it’s a top four and then a couple of others with maybe one scrub thrown in as the seventh guy who might or might not play depending upon who is hurt. But this group of blueliners has nobody who doesn’t play about as much as anyone else. So for example on Friday evening against Minnesota, the highest minute-getter was Vatanen with 21. But Lindholm also had that many minutes. Fowler had 20. Beauchemin was over 19 and a half; Lovejoy had almost 18; and the trailer, but not by a lot, was Stoner, with 16. The difference, of course, was in power play time.

With the extra man, Vatanen had nearly six minutes. Both Lindholm and Fowler had nearly four. So you even that all out with regular strength play, and you’ve got a group of six who are within a whisker of each other in terms of clock time.

Sunday night was much the same, if not tighter. The most icetime was scored by Beauchemin, with 21:54. The least was by Stoner, at 18:37. That’s pretty tight when you consider that there are teams with one or two guys getting 26 or 28 minutes and some defensemen logging barely half that.

What the Ducks’ D also nearly equal each other in is offensive production, or lack thereof, and this might be of some concern. Until Sunday night, when Vatanen scored twice on the power play, once near the end of period one and once near the end of P2, the D hadn’t had a goal all season. That’s five games. The one on Sunday versus the Blues was the sixth. They did have some assists, with both Vatanen and Fowler notching three and Lindholm two. Fowler would add one more on Sunday on Lindholm’s second goal.

One puzzler, then, would be reconciling the amount of offensive chances the Ducks defense (particularly Fowler, Lindholm, and Vatanen) are getting versus the amount of time they spent skating and shooting the puck. If it’s true that they’re a mobile, offense-minded group, why don’t they have more points?

Boudreau had at least one answer, concerning Vatanen: “He’s always been able to move the puck and see the ice. I mean, one of the things last year, he never hit the net when he shot the puck. So obviously, it’s five games in [actually six], and he’s hit the net twice. So that’s a real big improvement, but I think it’s maturity on his part. Hopefully, he keeps to continue going at that pace. We need those good quarterbacks and puck movers on the back end, and we need his shot threat. His first goal was just a bullet, and those are threats that people will start to cheat towards them, and then we have the players who I think can do well down low.”

While defense is the topic of conversation, you might wonder who else is on the Ducks’ list. Mark Fistric hasn’t played a game yet this year, nor has Bryan Allen. Both are listed as hurt on a day-to-day basis, Allen with lower body and the other man with flu-like symptoms. Funny that they are both veterans. Allen is huge at 6’5” and mid-220s. He’s a veteran of over 700 NHL games, including more than 100 with Anaheim over the past couple of years.

So put the summary on it this way: the Ducks have a young-ish defense. They’re mobile and offensively capable, if a bit underachieving as of yet. And if the youngsters prove unsteady or not durable, they’ve got a couple of backups who are veterans, if not the most highly experienced or skillful guys. But if anyone gets hurt, they could step in and do OK, and neither of them would be any kind of a liability in terms of size. In fact, depending on who went down, the stand-ins would do nothing but make the Anaheim defense a more tower-like force to get around at the team’s blueline.

The style of the team, it must be said, does not start with defense. It begins with offense, and they have a lot of strength there. That should get them nicely through the regular season, like it did last year. After that, it’s going to be time for Boudreau to figure out whether to continue in that vein or look cross-town to the Kings, who play net-out all the time, an approach which has obviously worked well in the post-season.

The Ducks are 5-1 already, and they face Buffalo on Wednesday after a few days off.

My new book, Coming Down the Mountain: Rethinking the 1972 Summit Series, is out now. Please read to top up your knowledge of a great moment of the hockey past.