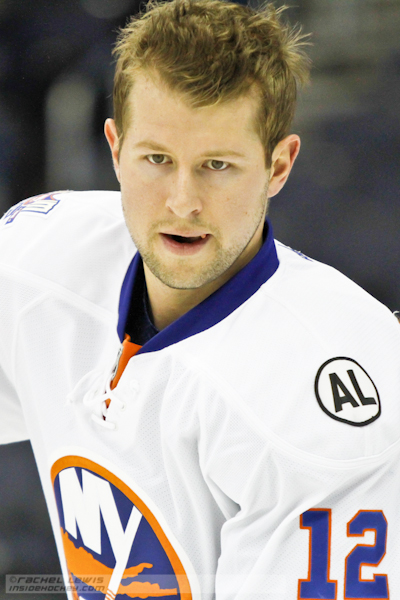 Josh Bailey scored 54 seconds into overtime to give the Islanders a 3-2 victory over the Anaheim Ducks in their home opener at the Barclays Center Sunday night. The Islanders led 2-0 on goals by Brock Nelson and John Tavares before Anaheim rallied to force overtime. The win was the first for the Islanders in the 2016-17 season and improved the team’s record to 1-2-0.

Bailey’s game-winner came on a pretty move. The veteran forward picked up the puck just inside the Anaheim blue line and faked out two defenders before heading to the net and beating goalie John Gibson to give his team the victory.

“We were just trying to maintain possession and I circled back,” Bailey said. “I made a good move and I was able to put it home.”

Isles head coach Jack Capuano is giving Bailey a chance on the top line with Andrew Ladd and John Tavares and hopes Bailey can take advantage of the opportunity. “If he plays with confidence and the work ethic that he has, he’s a skill player,” Capuano said. “He has the ability to play on that line.”

The Islanders came out strong in the first period before a sellout crowd of 15,795 and dominated play early. They outshot the Ducks 16-3 in the opening 20 minutes and didn’t allow a shot on goal until the period was more than halfway over.

The Isles took a 1-0 lead on Brock Nelson’s second goal of the year at 7:47. Nelson buried a turnaround shot from the deep slot to break the ice but despite their dominance, the home team led only 1-0 heading into the locker room for the first intermission.

“I liked the way we were moving our feet,” Isles captain John Tavares explained. “We just didn’t let them keep up with us. We were strong on the puck, we got in on the forecheck. When they tried to get some transition up the ice we just came hard as a group of five guys and we were able to transition the other way and keep on them and really tried to wear them down.”

The Islanders got into penalty trouble in the second period and that allowed Anaheim to regroup and keep the game close. The Isles were shorthanded four times in the middle stanza and were outshot 13-5, but a solid penalty kill and strong goaltending by Jaroslav Halak kept the score 1-0 after 40 minutes.

Tavares expanded the Isles lead at the 7:59 mark of the third period when he scored on the rebound of his own shot set up by a difficult pass by Cal Clutterbuck. Clutterbuck’s stick broke but he still managed to find a way to get the puck to Tavares who beat Gibson to make the score 2-0 for the home team.

The Isles two-goal lead was short-lived, however, as Cam Fowler’s shot deflected in off the leg of Thomas Hickey just 32 seconds after Tavares’ tally to pull the Ducks to within 2-1.

Anaheim coach Randy Carlyle pulled his goalie late in the third period and got the equalizer with exactly 1:00 left in regulation when Ryan Getzlaf beat Halak to the short side. That goal sent the game to overtime where Bailey scored to give the home team the win.

“I thought it was a good game for us overall, “Clutterbuck said. “That’s a good team. I know they may be 0-2-1 but they always play hard and their a good team. It’s a big one for us.”

The Islanders return to action Tuesday night when they host the San Jose Sharks at the Barclays Center at 7:00 PM.

The Islanders are now 13-0-2 at the Barclays Center against Western Conference opponents.

Casey Cizikas was injured in the latter part of the game and did not return. His status was not known immediately after the game.