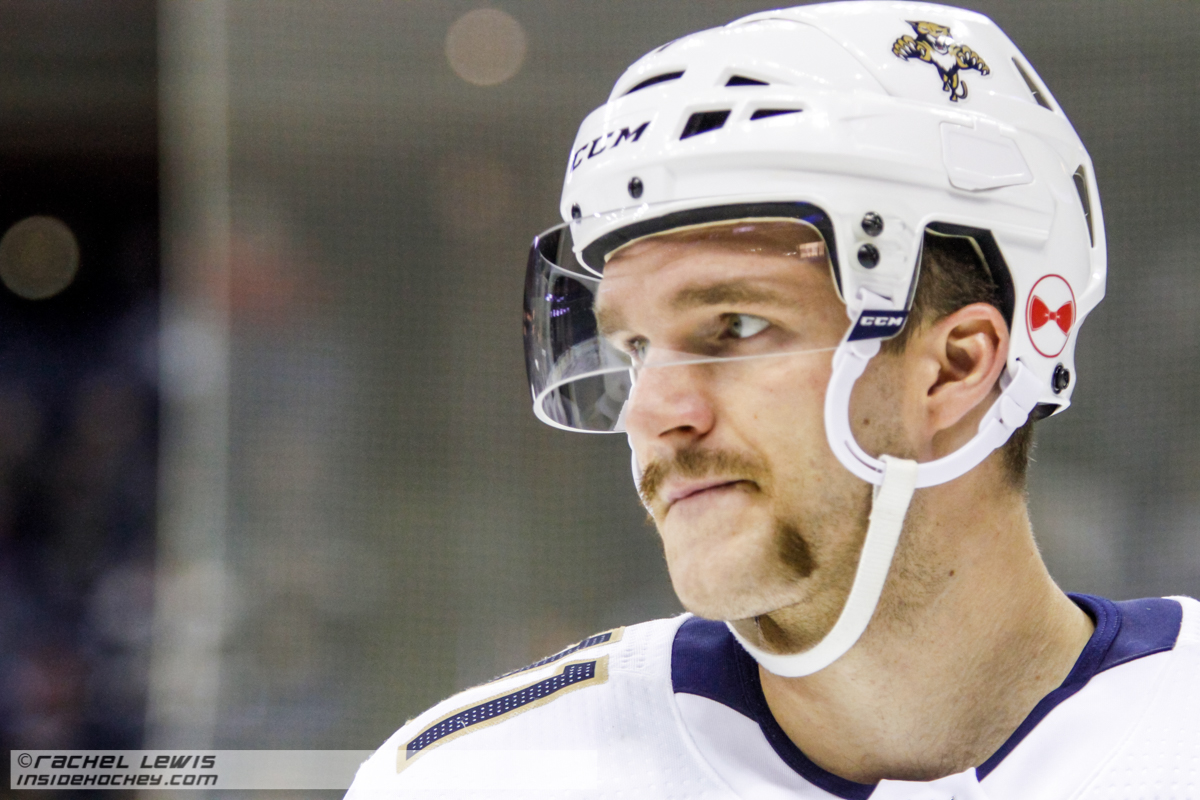 You can’t beat the  Ducks for jargon. A while  ago, I wrote an article about coach Dallas Eakins called something like,  “Less Psychobabble, More Hockey” in response to the constant stream of pop psychological (nonsense) that extruded itself from his mouth. Then the Ducks started winning, and I had to eat my words.

Now it’s something else: “asset management,” which apparently is the nouveau way to say  the  much  longer, “we’re sitting this guy so he doesn’t walk in front of a slapshot and get hurt  before we trade him at the deadline.” That’s what happened to Hampus Lindholm and Rickard Rakell on Friday night with Florida in town.

The  result? Not of the guys sitting so much as in the game as a whole—the Ducks lost 3-0. Two of the goals against came in period one, by the same Panther: Huberdeau. The third tally came in period two by one Joe Thornton. You’d recognize him as the  creepy beard guy  were you not  already familiar with  his  work after he’d played 1707 games.

The game had the  impression of being mostly Florida. The Ducks rarely  penetrated into the zone, and when they did, it was one and out most often. Perhaps  the fancy stats people  would  point out that the  Ducks had but 17 shots to  Florida’s 42, and that the shots, shots attempted and blocked, and shots missed totaled to 37  Ducks, 86 Panthers. Said otherwise: it wasn’t even close. Said in goalie-speak:  it wasn’t Gibson’s fault.

Obviously, Jon Gibson was in net for the Ducks, and at one point was observed to be stretching between plays in a way that might betray a groin pull. He didn’t come out.

After the  game, Troy  Terry was, according to one observer, like the youthful Cam Fowler—angry and looking like he felt himself to be a failure. He had three shots to lead the forwards. Simon Benoit on defense led the team with four.  Obviously,  none were successful, but that’s hardly Terry’s, nor Benoit’s, fault. The Panthers, despite their  prodigious offense (+74, which nobody in the East is even close to), are also mindful defensively, limiting chances and squelching Ducks’ hopes at every  turn.

The ice time leader for the  home team was Fowler at almost 26 minutes. Kevin Shattenkirk trailed him at over 23, and Adam Henrique was at 20:01. Andrej Sustr on D had 20, to come in fourth.

Sam Steel, who suffered a tooth-loss jaw injury last week, was back after a few games on hiatus and wore the bottom glass jaw protector while playing a scant 11 minutes.

The Ducks played a penalty-filled game, with nine penalties over 29 minutes. The Panthers had four for 11 minutes. For each time, one five-for-fighting was included, and for the Ducks’ combatant, Nic DesLauriers, there was a ten-minute misconduct to boot. The first Huberdeau goal was on the  PP. The other two were even strength. Even distilling out  the fighting and misconduct, the  Ducks were shorthanded half a dozen times. One was  due to a  puck-over-glass penalty  on Gibson, though, that on video  review was clearly  shown to have touched the glass. What’s wrong, NHL? This should never happen in the area when every  goal is subject to video review for a player being a millimeter offside.

Troy Terry said after the game, “It was a hard hockey game. I’ll give them credit. They’re a good hockey team. There’s a reason they are where they are. We just gave them all too much respect. I don’t know if that’s what it was, but I felt like we didn’t execute on plays and we didn’t move the puck effectively. When you’re doing that, you’re kind of fighting in, and you’ve got a team that can make plays, it’s hard to create anything offensively. That’s a hard team to play a lot of defense against. They’re a good team, and we’ve just got to get back to what we were doing offensively and just moving pucks up the ice.”

Dallas Eakins explained it thusly: “There were times I thought we were connected and there were times we were not connected. With where we’re at right now, everybody in our lineup has to be playing at 100 percent, especially against a team like that. We’ve got some guys in our lineup that have taken on massive roles, guys who weren’t in our lineup before, whether they were in San Diego or in and out of our lineup. This is a massive, massive challenge, especially when you’re playing arguably the best team in the league.”

Where to from here?

The Ducks take on the Predators Monday night, by which time the trade deadline intrigue will have passed. Will it be that other Ducks’ players and prospects will have been packaged off with the two assets under management? Fans will be anxious to see. What they might expect is a gritty performance, but one that will have been misplaced by  a couple of weeks, the  Ducks having gone 2-6-2 to seal their fate over the past ten games.