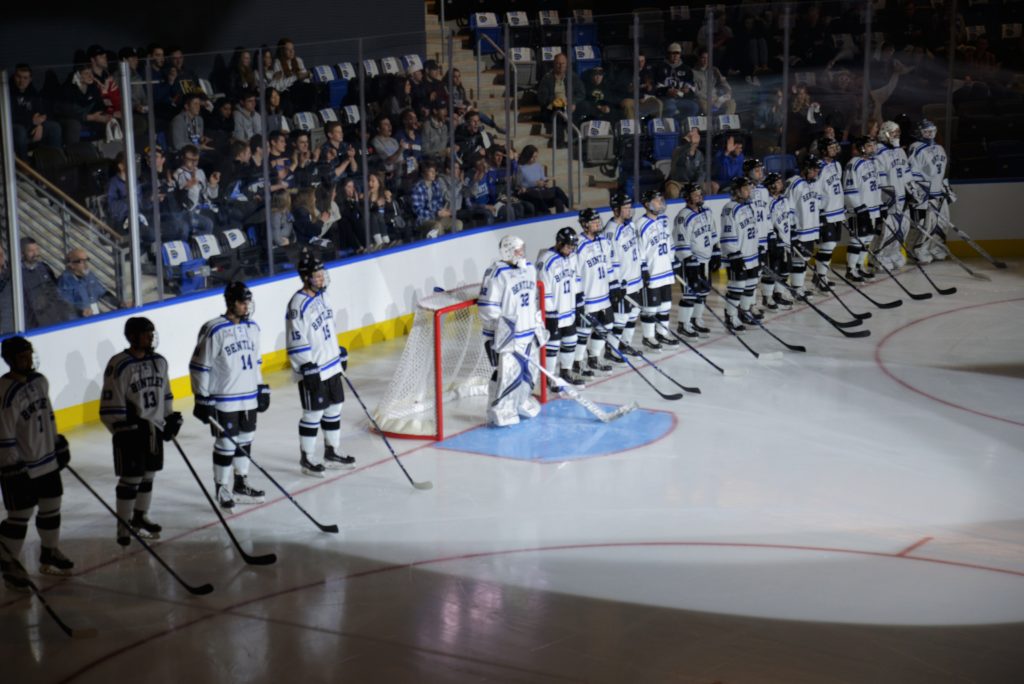 Waltham, MA- Friday night marked a turning moment for the Bentley University Hockey program. After 20 years of Division I Hockey at the John A. Ryan Arena, the Falcons opened their brand new on-campus arena, the Bentley Arena.

The students, alumni, and community showed up in force and filled their shiny palace. It marked the arrival of the program to a Division I arena. Unfortunately, the enthusiasm did not last the whole night. The Black Knights of the United States Military Academy opened the brand new building by spoiling the Falcons’ party and earning two crucial points in the race for the Atlantic Hockey Playoffs.

The first period opened with plenty of fanfare and messy play. The Falcons came out hitting Army hard but did not get many shots on goal. Army won the shots battle only 8-7 as the teams appeared to be fighting through a slog and couldn’t get into an offensive rhythm.

Both goaltenders, Army’s Cole Bruns and Bentley’s Jason Argue saved every shot they faced and the game entered the first intermission scoreless.

The fans wanted something to cheer about early in the second, and the Falcons satiated their thirst. Tanner Jago fired a slap shot from the blue line that trickled through Bruns for the first goal at the new arena. The fans applauded with glee, but the lead did not last long. Less than two minutes after the Jago goal, Jonathan Desbiens took a roughing penalty.

On the ensuing power play, Alex Wilkinson fired a puck by Argue for a 1-1 tie. The teams reverted to an offensive slog for much of the remaining period. Bentley won the shots 13-9 and the game entered the second intermission knotted 1-1.

Army came out firing early in the third period and spoiled Bentley’s housewarming. Wilkinson collected his second goal of the game on another slap shot 1:23 into the third period. Four minutes later, Tyler Pham blasted one off Argue that rolled off his pad and into the net for a 3-1 Black Knight lead.

The surge continued when Connor Brassard took a tripping penalty and Connor Andrle paid it off with another goal. The avalanche finished when Zach Evancho potted a goal to put Army up 5-1 for good. In less than ten minutes of the third period, Army spoiled the game portion of Bentley’s party to open the new arena. But after the game, there was still positivity on the Falcons side.

“We’ve brought some recruits through here and it’s made some real difference. I’ve been here for 22 years and now we took a big step forward” said Falcons Head Coach Ryan Soderquist. “We’ve always had the support of our community and now we’re giving them a direct way to support us on campus.”

The loss drops Bentley to 11-14-6 overall and 8-13-5 in Atlantic play. They’re one point up on Sacred Heart for last place in Atlantic Hockey.

Army, meanwhile, runs their record to 12-12-6 overall and 10-9-6 in Atlantic play. The Black Knights are tied with Robert Morris for 4th place in the conference. The teams rematch at Bentley Arena on Saturday night. Puck drops at 7 pm.