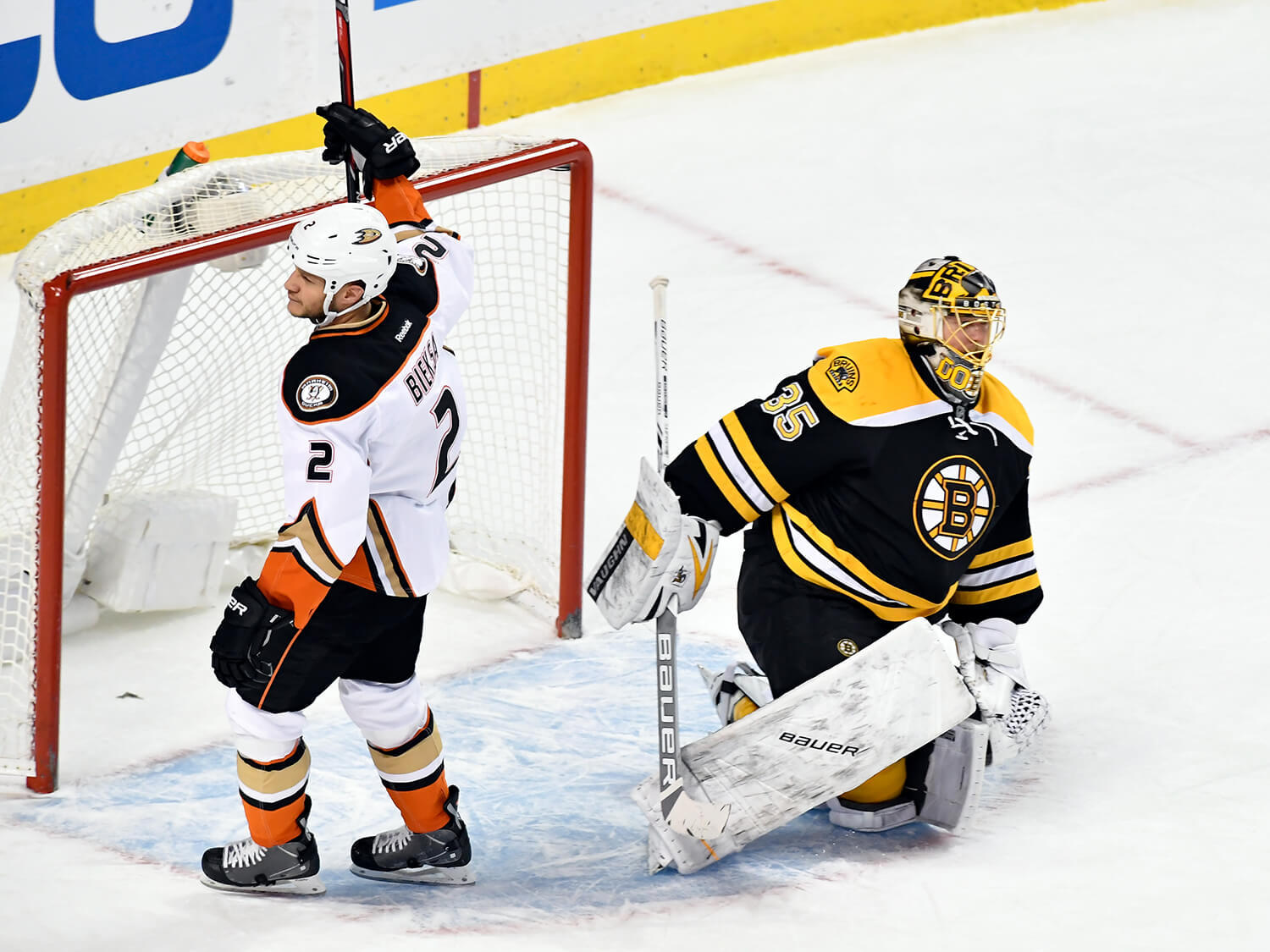 Despite jumping out early, it’s another loss for the Boston Bruins. After taking a 2-0 lead with goals just 13 seconds apart, the Bruins gave up their advantage before the first period ended and suffered a 4-3 defeat to the Anaheim Ducks. Anton Khudobin suffered the loss in net and he remains with just one win in his six starts all season.

“I thought the first period was pretty good,” Khudobin said after the game. “The second, a couple of unlucky bounces. The third goal went through my five-hole, went behind, and then came back. Cluster-[expletive].”

“It is, of course, tough when you’re playing once in a while and you want to get the right result. But I didn’t get it again, so it makes me  more angry than disappointed”

When Tuukka Rask hasn’t been in net, the puck hasn’t bounced the Bruins way. When the Finnish goalie was out early this season, Boston was stuck with Zane McIntyre and Malcolm Subban. Khudobin returning from injury himself was supposed to stabilize the backup position so Rask could rest after tough back to backs, as was the case Thursday night.

“We believe in every single guy,” said center David Krejci. “First goal was all me. Everyone had their guy, I just couldn’t put the stick on it, tried to clear it, but things are going to happen. Dobby had zero chance on that, and I felt like we should have done a little better job in front of him. They had always two guys crashing the net, and they got a couple bad goals, so we’ve got to do better job at this and help him out a little bit better.”

On Thursday night, Khudobin allowed four goals on 27 shots to a Ducks team coming off of a 6-2 loss two nights before. His struggles, especially at home, are nothing new after he allowed four goals to the Colorado Avalanche a week ago.

Not all of the loss to Anaheim fell on the shoulders of Khudobin, however, who saw a breakaway goal from Kevin Bieksa out of the penalty box go by him while the Bruins were caught not paying attention at the end of a power play, though Bieksa isn’t the kind of player one wants to be giving up breakaway goals to. A Brandon Carlo turnover also led to Josh Manson open in the crease for the Ducks’ go ahead third goal. Certainly a defensive unit including young players like Carlo, Colin Miller, and Matt Grzelcyk can lead to mistakes, but Khudobin also wasn’t making the stops.

With Subban playing poorly in each of his NHL attempts, and McIntyre having struggles of his own despite one solid game against Montreal in his stint, the Bruins are stuck with Khudobin and left trying to figure out how to salvage the season of their backup.

“Nothing can kill me right now,” said Khudobin. “Obviously, it’s disappointing. I’m not really happy. But I’m not going to put my head down and say that I’m done.”