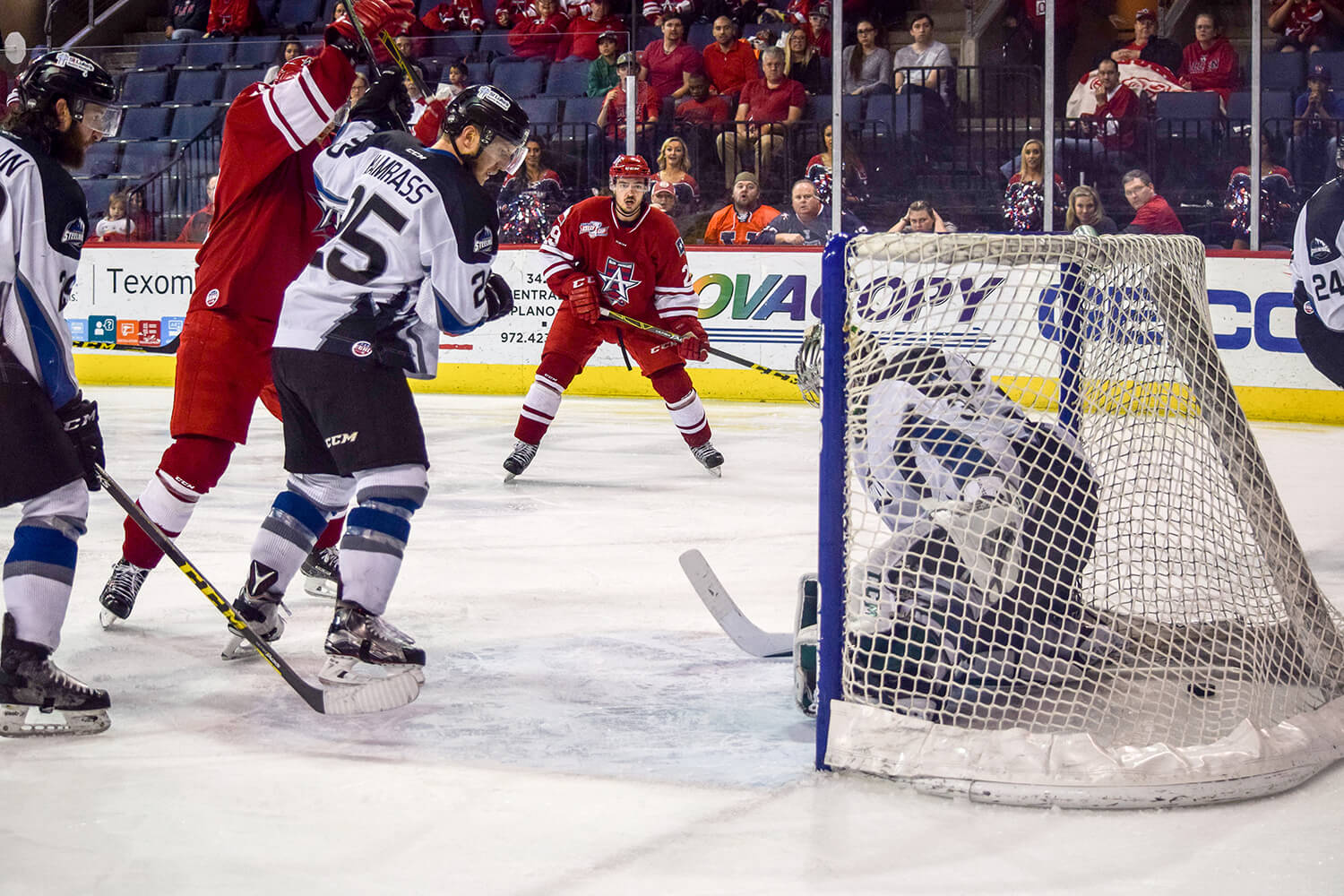 The ECHL defending Kelly Cup Champion Allen Americans are at their best – and most dangerous – when they play a Game Seven on their Allen Event Center Home Ice.

The Americans, who captured the Central Hockey League’s President Cup in 2012-13 (a Game Seven overtime victory over visiting Wichita) and 2013-14 (a Game Five victory at home over Denver) followed by last season’s ECHL Kelly Cup conquest of South Carolina (in Game Seven at home), defeated the Steelheads 4-2 in Game Six on Tuesday before recording a dramatic come-from-behind Game Seven sudden death overtime 3-2 victory on Wednesday.

“I’m not surprised (the Americans came back from a three-game-to-two deficit,” said Chad Costello of the Western Conference’s 4th ranked squad. “I’ve seen our practices every day, I’ve seen our locker room every day. I know we have the heart of a champion. The third period and the overtime showed our heart.”

Forward Tristan King netted the game winner just 3:28 into overtime, but it was defenseman David Makowski’s power play marker that tied the score at 2-2 seven minutes into the third period. Costello’s, who won his second consecutive ECHL regular season scoring crown during the regular season, connected for his first goal of the playoffs to tie the score 1-1 in the second period. Goalie Riley Gill made 24 saves to give Allen an opportunity to win the game and improve to 5-0 in Game Seven on home ice over the last three seasons.

“Game Seven has been good to us in our building, so it was great to be in that position,” said Martinson, who has been behind the Allen bench for each title.

Allen moves to the Western Conference semifinals against a Missouri team that won the ECHL regular season points championship by 10 points, and the conference by 20 points. The Mavericks, who are coached by former Dallas Stars defenseman and ex-Allen assistant coach Richard Matvichuk, were the only ECHL squad to sweep their opening round series (vs. Quad City).

“We’re going to bring it (in the next series), it’s going to be a team effort, and we’ll give it everything we’ve got,” said King. “We’re excited for the challenge.”

King was also instrumental in the Game Six triumph, tying the score 1-1 with a first period red light. Defenseman Eric Roy netted the go-ahead marker just :33 into the second stanza, and fellow blueliner Matt Register and forward Greger Hanson added red lights to back the 30-save netmninding of Gill.

“This was a solid game by our group,” said Martinson, whose squad was without forward Vincent Arseneau, who was suspended for Games Six and Seven for an illegal check to the head match penalty in Game Five. “We didn’t beat ourselves tonight.

In Game Five, Idaho (the Western Conference 5th ranked team) jumped back into the series lead, three-games-to-two with a 7-1 triumph April 23 at Century Link Arena. Gill was replaced by Jake Hildebrand after allowing two goals in the game’s first five minutes, and forward Gary Steffes netted the lone Americans’ marker.

The previous evening saw the Steelheads deadlock the series at two games apiece with a 3-1victory in Game Four April 20 at Century Link Arena. Costello and Arseneau set up King for the game-tying goal, but goalie Gill allowed a pair of second period markers, finishing with 26 saves. “We made a couple of big mistakes and they cost us,” said Martinson. “Giving up that shorthanded goal really hurt, and our power play didn’t do anything to help us.”

Allen grabbed a two-games-to-one lead with a 3-1 victory in Game Three on April 20 at Century Link Arena.  Hanson and Makowski gave the Americans a 2-0 lead in the first period, and Register added a second period marker to back the outstanding 37-save performance of Gill.

“We had a strong start tonight, which is very important on the road,” said Martinson. “Gill was solid and the (Spencer) Asuchak-Hanson-(Dyson) Stevenson line is starting to heat up.”

Casey Pierro-Zabotel scored second and third period goals after Steffes tallied in the opening stanza to back the 21-save goaltending of Gill, making his first post-season start this year.

“(In Game One) we had too many turnovers (and) that just kills your momentum (and) obviously gives them chances that they don’t have to work for.” Martinson said. “(Tonight) our power play was much better. I think we came out with a little more fire, we were a little angry, we played really good defensively.”

Allen dropped the series opener, 3-1 despite outshooting the Steelheads, 37-24 on April 14 at Allen Event Center. Steffes scored the Americans’ only goal to cut Idaho’s lead to 2-1, and goalie Hildebrand made 21 saves.

“It’s an honor to win this award,” said Costello. “You look at what Josh Robinson did in Missouri this season, and the numbers that Trent Daavettila put up in Colorado; I am very appreciative and very lucky to be playing on such a great team. We also have the best coach in the league. His record speaks for itself. I’d also like to thank my family as well as the great fans in Allen for all their support.”

Costello has scored 228 points in his two campaigns with Allen. He previously earned MVP honors during the 2011-2012 season after scored 76 points in 47 games with the Colorado Eagles.