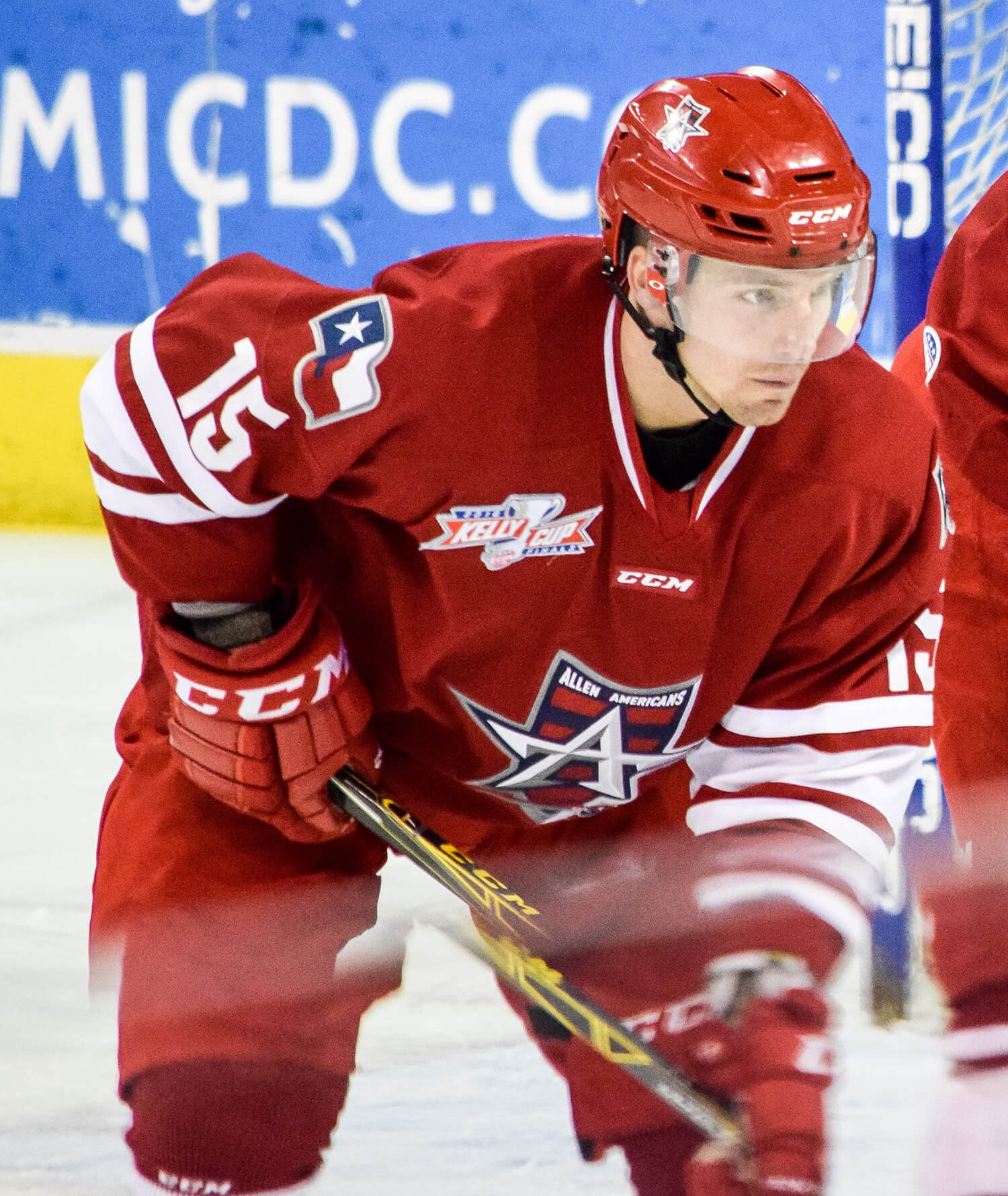 The Allen Americans know the task before them will not be an easy one.

Yes, they are in the enviable position of leading their best-of-seven ECHL Finals series, three games to two after winning two straight on the road. However, they must win one of two potential home games against a desperate, tough foe at the Allen Event Center to capture their fourth consecutive Presidents or Kelly Cup championship.

“We definitely cannot take the Wheeling Nailers for granted,” said Americans co-captain Gary Steffes. “They have heart and certainly won’t give up. We will prepare just like every other game. But we will have the mentality of not underestimating their resiliency – that’s essential. We will have to be at our best.”

The Western Conference champion Americans, a San Jose Sharks affiliate are battling a Nailers (Pittsburgh Penguins farm) team that recently made ECHL history by becoming the league’s first team ever to capture Games Six and Seven on the road. That achievement enabled Wheeling to upend the defending Eastern Conference champion South Carolina Stingrays to reach this year’s Finals.

“We’re thankful (being up three games to two) but it won’t mean anything if we don’t bring home the championship,” said Allen defenseman Aaron Gens.

The Americans jumped back in front in this series on Saturday, June 4 with a dramatic 3-2 sudden death overtime victory in Game Five at WesBanco Arena. Leading ECHL playoff goal scorer Greger Hanson netted his 14th marker just :17 into the extra frame.

“(Allen forward Spencer) Asuchak won a puck battle along the boards and fed (Nikita) Jevpalovs, who shot the puck,” said Hanson on the giddy Allen bus that was headed back to Texas late Saturday night. “Their goalie made a great save but their defenseman cleared the puck out to me in the high slot. I just tried to shoot as hard as I could on (the goalie’s) glove side. It was a great feeling to see it go in.”

Allen goalie Riley Gill made 24 saves and extended his ECHL record career 11th victory in Finals competition after the Americans were outshot 26-16, while Palazzese stopped 13 shots.

The Nailers tied the score, 2-2 on a power play goal by Cody Wydo with less than four minutes left in regulation. Wydo connected for his team-leading 11th playoff goal with a quick wrist shot after picking up a loose puck in the slot.

Allen scored twice in a span of four minutes early in the third period to take a 2-1 lead on Chad Costello’s seventh goal of the playoffs off a rebound of defenseman Eric Roy’s shot, and Vincent Arseneau’s eighth red light on a shot from the left wing circle. Costello tied an ECHL playoff record with his 26th assist. In addition, his 33 points are only five shy of the league mark for postseason points.

Wheeling grabbed a 1-0 lead midway through the second on Jarrett Burton’s seventh goal of the playoffs.

“Our guys really stuck together tonight,” said Steffes. “Even when (Wheeling) scored the tying goal late in the game, our team didn’t panic. That’s a big testament to the resiliency of our team.

“We have much respect for Wheeling, a great team who plays in a tough building (for the visiting team),” Steffes added. “We are very grateful and blessed to be walking out with two wins. Our team has character and heart, which I think we really showed.”

The previous evening (Friday, June 3), Allen tied the series at two games apiece by rallying from a second period deficit in Game Four to capture a crucial 4-2 victory over the host Nailers before 5,439 fans at WesBanco Arena. Jevpalovs scored his second post season goal on a rebound of Arseneau’s shot with 1:45 left in the second period to tie the score at 2-2, and Costello connected on a breakaway early in the third period to give the Americans the lead for good, 3-2.

“The goal by Nikita gave us a lot of momentum going into the third period,” said Allen GM-Coach Steve Martinson. “Chad made a great play to get the puck to Arseneau, who set up the play for Jevpalovs to score the game-tying goal.”

Roy hit an empty net for his fourth of the playoffs to finish the scoring. Gill made 32 saves, while Palazzese stopped 25 shots between the pipes for the Nailers.

“We made a couple of mistakes that could have cost us, but Riley (Gill rescued) us with some huge saves,” said Steffes. “This is a huge win for us, and ensures that the series will return to Allen.”

Martinson noted that Wheeling’s “small neutral zone and tight corners made the two wins really big. Our go-to guys and returning players have come up very big every time we needed them.”

The Nailers grabbed a 2-1 lead on goals by Dan O’Donaghue with :16 left in the first period, and Wydo midway through the second. Allen took the game’s first lead when Steffes netted his 12th goal of the playoffs late in the first period. The marker was the ninth career red light in ECHL Finals competition for Steffes, tying him with Mark Deazeley and Greg Puhalski for second place in career ECHL Finals markers. Costello finished with a goal and two assists.

Wheeling took a two-games-to-one lead with a 3-2 victory in Game Three on Wednesday, June 1 at WesBanco Arena. Defenseman James Melindy scored the game winner midway through the third period in a contest that the Americans never led. Steffes tied the score 1-1 in the second period. Hanson also tied the game at 2-2 early in the third period with his 13th goal of the postseason.

Following a scoreless first period, Ty Loney (the son of former Penguins forward Troy Loney) gave the Nailers a 1-0 lead and Anton Ziobin made it 2-1. Palazzese made 28 saves, while Gill made 24 stops.

Wheeling captured Game Two, 7-6 on Sunday, May 29 before a sellout crowd at Allen Event Center to tie the series at a game apiece. The Nailers led 7-1 after two periods and withstood a dizzying Allen comeback attempt that produced five goals in a span of 9:42.

In the series opener, Allen grabbed the lead with a 5-3 victory Saturday, May 28 before a sellout crowd of 5,625 at the Allen Even Center.

Allen upended second-ranked Fort Wayne in five games to earn the Western Conference championship. The Americans, who defeated South Carolina in seven games last spring to cap their first season in the ECHL, also captured the Central Hockey League’s Presidents Cup in 2012-13 and 2013-14. The Americans are also the fifth team in ECHL history and its first in 22 years to return to the Finals after winning the previous year’s hardware. Toledo last turned the trick, earning the 1994 and 1995 Riley Cups.