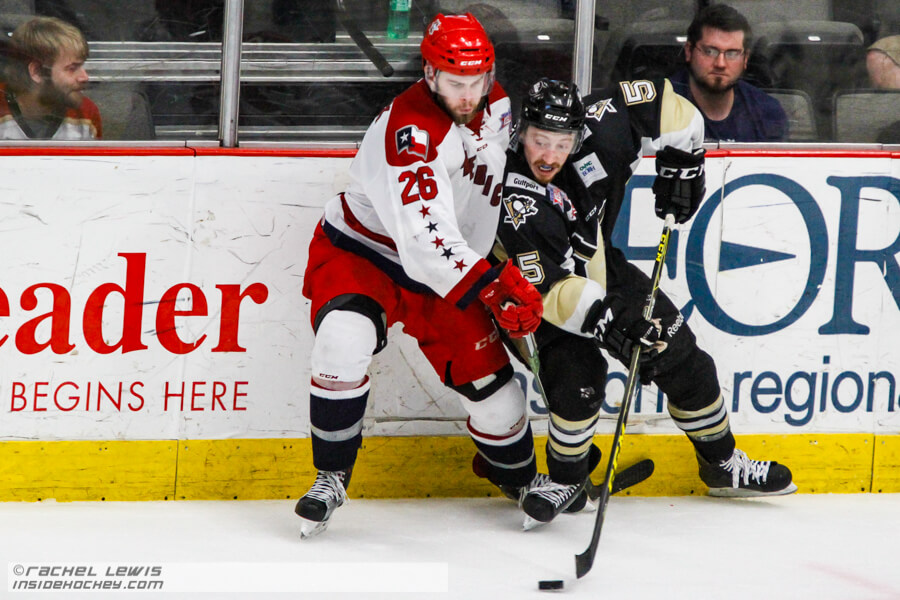 “The greater the obstacle, the more glory in overcoming it.”

It isn’t easy being the two-time defending ECHL Presidents Cup champion. The Allen Americans learned that the hard way during the first six weeks of the 2016-17 campaign, when every opponent took the ice with that glint of determination in their eyes.

Going against everyone’s best effort night-in and night-out, the Amerks flirted with won-lost records such as 4-7, 5-9 and 8-11 while trying to remain focused and calm despite a sudden inability to light the lamp.

As General Manager-Coach Steve Martinson made the various but necessary changes to the lineup, the club’s mainstays such as forwards Chad Costello, Greger Hanson, Gary Steffes and Spencer Asuchak, defensemen Mike Gunn, Joel Chouinard, David Makowski and Eric Roy, and goalie Riley Gill put their collective noses to the grindstone. They did this despite free-falling perilously close to the 8th place playoff bubble.

The French playwright and actor Molière (Jean-Baptiste Poquelin’s stage name) would’ve loved this group. Instead of trying to skate around or avoid their adversity, Allen’s proud hockey club steadfastly embraced and then overcame this challenge.

The Americans began their happy new year with a pair of victories over the Indy Fuel to run their winning streak to five games and their unbeaten skein to 9-0-1. Newcomer Bryan Moore netted two goals, Steffes added a goal and an assist, and Costello, Tanner Eberle and Asuchak each added single red lights in a 6-3 victory on Saturday, January 7.

The following afternoon, Costello scored again to go with three helpers while Moore (his 11th), Eberle (his eighth), Zach Hall (his fifth) and Roy also lit the lamp in a 5-3 triumph. San Jose Sharks goaltending prospect Jamie Murray made 26 saves Saturday and added 30 more on Sunday.

As a result, Allen collected 19 of a possible 20 points to ascend into a first place tie with Colorado in the Mountain Division of the ECHL’s Western Conference, seven points behind conference leader Toledo.

Newcomers such as Eberle, Hall and Moore have stepped in nicely to give the Americans tremendous scoring depth. Moore has scored a goal in nine of the team’s last 10 games, while Hall has contributed at least one point in each of the last five outings.

“Zach Hall has good chemistry with Moore and they play playing together,” Martinson told the Allen Americans Blog after the 5-3 victory over Indy. “I call them ‘Frick and Frack’ (because) they are like bookends and they sit next to each other in the locker room. The play Hall made on Costello’s goal by holding and holding and holding the puck was great. Not many players have the poise to hold onto the puck like that.

“We have one other player that does that all the time, and that’s (Costello),” Martinson added. “You can’t teach that kind of poise, but Hall and Costello both have it.”

The Americans entered the new year after having reeled off their best December ever with a 10-2-1 record, including an outstanding 5-0-1 mark away from the Allen Event Center. Since December 1, their power play has been clicking at a 30% rate, while the penalty kill has effectively competed at a 90% clip.

“I believe we have always had the skill and depth that we’ve shown in the last five weeks,” said co-captain Steffes, whose team has scored 33 goals in its last five games, 47 in its last eight games, and 62 in the last 11 contests. “We were just fighting to overcome the rut we were in.

“(As soon as our) guys started scoring a bit, our confidence began to grow, our team started winning and gelling, and by God’s grace we’re playing great hockey as a team,” added Steffes.

Costello, the ECHL’s two-time defending scoring champion, remains atop the circuit with 62 points (including 20 goals), while teammate Hanson is 4th in the league with 45 points, including a league-high seven power play red lights.

“I would say we stayed confident even when it wasn’t going so smoothly for us (earlier in the season),” said Costello. “We continued to believe in each other, and now we’re playing more as a team instead of individuals, and that makes it easier to score.”

The only bad news is that goalie Gill is out of the lineup, nursing an injury. The Northfield, Minnesota native was selected the Warrior Hockey Goalie of the Month in December, when he posted three of his ECHL-leading five shutouts as part of a 7-2-0 mark that helped fuel the Americans’ resurgence. Gill, who has backstopped the team to both of their ECHL playoff championships, also leads the league with a 2.21 goals against average and a .938 save percentage.

Murray has done quite nicely in his absence, ranking 20th in the 27-team circuit with a 7-6-1 mark (including two shutouts), a 3.14 goals against average, and a .905 save percentage. The Americans are the same organization that prepped netminder Aaron Dell for his current success with the NHL’s Sharks.

“We have a strong, deep team and thankfully, we’re stepping up together and playing to our strengths as a unit,” concluded Steffes, whose team resumes its eight-game homestand this Friday, January 13 against Wichita, followed by Sunday and Monday contests versus Missouri.