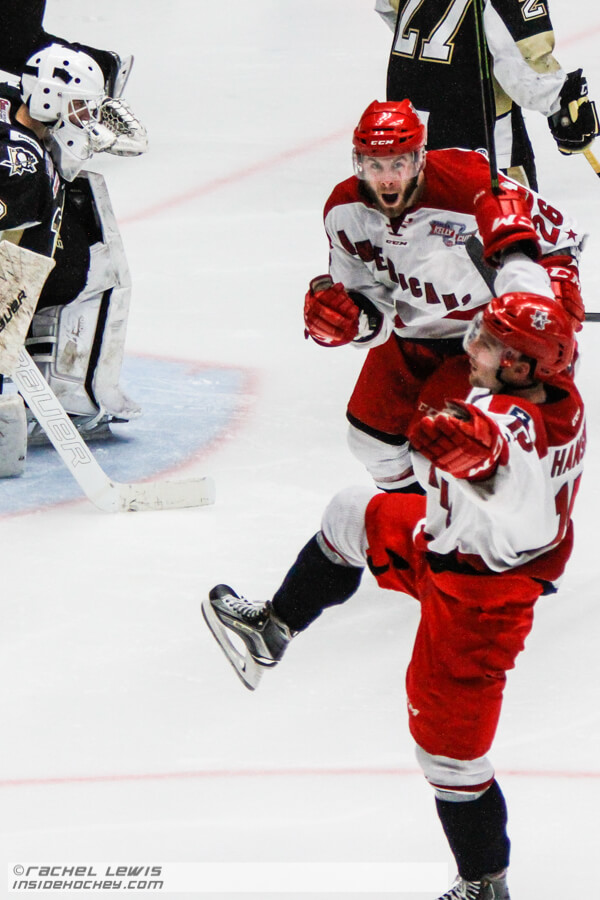 The end of the year holidays feasts were much more fulfilling and tastier than the Thanksgiving turkey for the two-time defending ECHL Kelly Cup champion Allen Americans.

After struggling for the first six weeks of the campaign with mediocre won-loss records such as 4-7, 5-9 and 8-11, General Manager-Coach Steve Martinson’s skaters have found given their fans something to smile about once the calendar turned to December.

Since the beginning of the year’s final month, the Americans have won seven of 11 games, with two of the losses coming in overtime or a shootout. Included was a season-high four-game winning streak. Beginning at Thanksgiving, they have posted an impressive 9-2-2 mar in their last 13 games, and have shown marked improvement in their play at both ends of the ice heading into the Dec. 24-27 Christmas break.

“The start of the year was tough,” said forward Gary Steffes. “We did not get off to the start we had hoped for, an definitely had to learn to be resilient right from the start.

“Now our team is really (coming together),” Steffes added. “The moral and encouragement in the locker room is great. Our guys are working hard and playing strong, solid hockey. Our confidence is increasing, and we are blessed and excited for the second half of the season”

As a result, the Americans (17-13-2) have moved up in the ECHL’s Western Conference Standings into a fourth place tie with Tulsa, just one point behind third place Alaska and four behind second place Colorado. (The top eight teams in each ECHL conference earn post-season playoff berths).

The Americans dropped a tough 3-2 shootout verdict at home on Dec. 23 to Dallas Stars’ affiliate Idaho despite leading 2-0 midway through the third period, going on a power play at the outside of the five-minute overtime session and grabbing a 1-0 lead early in the shootout. Forward Bryan Moore’s fifth goal in as many games and a brilliant 41-save performance in goal by San Jose prospect Jamie Murray helped Allen earn a point in the standings despite playing their third game in four nights.

Allen defeated Idaho 6-0 24 hours earlier on Thursday, Dec. 22 as goalie Riley Gill earned his 14th victory of the season and fourth shutout in his last 10 starts. “Riley is in a groove right now,” said Americans defenseman Mike Gunn. “He’s confident with every save and it shows. (Idaho) had some great scoring chances…but (Gill) was not giving an inch.”

While Gill was stingy between the pipes, the human scoring machine, Chad Costello, added his 16th and 17th goals of the season. The two-time defending ECHL scoring champ is once again leading the circuit with 47 points.

“Our team is playing really well right now,” said Gill, who has won seven of his last eight starts. “I have to give a lot of credit (for my play) to the guys in front of me who blocked shots and cleared things out in front of the net. It makes my job a lot easier.”

Steffes and Moore each contributed a goal and an assist; Moore’s red light was his fourth in as many games.

Earlier in the week, they upended host Tulsa, 6-3 on Tuesday, Dec. 20 by erasing three different deficits and collecting three power play goals and a shorthanded marker.

That game closely reflected Allen’s recent turnaround, correcting their special teams performances to improve from 26th in the league to 19th for power play efficiency, and 10th on the penalty kill.

What makes this accomplishment even more impressive is the revolving door of personnel that has resulted from trades, injuries, AHL call-ups or simply the need to try something different. Gone are Matt Willows, Chris Crane, Mike Brodzinski, Tristan King, Alex Guptill, Jason Fram, JP LaFontaine and Rick Pinkston. Several of those names were part of one or both of the team’s run of two straight ECHL playoff titles. They also have lost key players to injury such as forwards Kale Kerbashian and Dyson Stevenson along with defenders Travis Brown, Aaron Gens and Gunn, and goalie Gill.

Fortunately, the players whom the Americans have added who have helped fuel their recent rally include forwards Moore and Zach Hall along with defensemen David Makowski, Harrison Ruopp, and Randy Cure.

Martinson’s squad resumes play Dec. 28 and 30 in Wichita before returning home for a New Year’s Eve tilt against Utah at the Allen Even Center. Their mid-winter’s name – if you will – occurs the following week before they resume play on Saturday, Jan 7 and Sunday, Jan.  8 at home against the Indy Fuel.