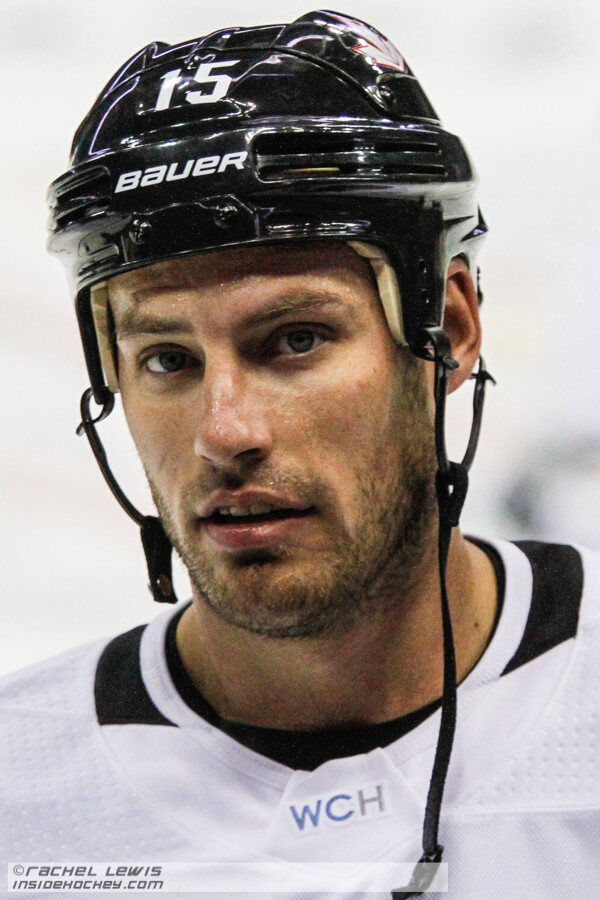 Ryan  Getzlaf was bound to  become the single  highest point-getter in Anaheim Ducks history eventually, but  he made it quick as he gained seven points—all assists—to start the year. He has played  in all of the  team’s ten games.  The  crucial seventh of those was notched Sunday at home versus the Montreal Canadiens.

The assist that put him at 989 scoring points, one ahead of previous leader Teemu Selanne, came in career game 1111, a fortunate number for trivia buffs trying to remember how long it took him. Selanne  played 1451 games in the NHL, but for Anaheim, he suited up 966 times. His other stints were with Winnnipeg, San Jose, and Colorado.

Before the season, Getzlaf signed a one-year contract to continue  to captain the team he first skated for in 2005-06 after being drafted in 2003  by the then-Anaheim Mighty Ducks. He played  his junior hockey for the Calgary Hitmen of the WHL.

Getzlaf was part of the group that won the Stanley Cup in 2007, contributing 17 points on seven goals in 21 playoff  games. That squad was a powerhouse with Selanne, Scott Niedermayer, and Chris Pronger amongst its notables and Corey Perry, the other  half of what were dubbed “the twins” until Perry  left a couple of seasons ago.

So how does someone score a point to take over a franchise lead?  With a daring breakaway goal? A snipe up over the goalie’s left shoulder? A cheap chip from the edge of the crease?

Getzlaf has surely scored goals like all of those, but  that’s not him at the core. He’s a passer. His totals show that: 279 goals, 710 assists. And on this  assist, he was true to form. Cam Fowler made a stretch pass from deep in his end to Getzlaf, out  near center. Getzlaf, his back to the Habs’ net, then did a light touch to Troy Terry, who carried the puck in. Behind him, Alexander Romanov dived to no avail. Terry deked around goalie Sam Montembeault to tuck the puck into the open cage.

Terry, a bit of the future come to the present, is leading the Ducks with five goals and ten points. Defenseman Kevin Shattenkirk also has ten points, but with three goals. Getzlaf’s seven points put him at the same number  as Fowler, tied for fourth on the squad.

Terry was mobbed by his teammates, but he quickly redirected the attention by pointing to Getzlaf. The Ducks all then emptied onto the ice to congratulate their Captain on his feat (about  which more below). In the crowd, Getzlaf’s spouse  and children, along with his mother, looked on.

After the game, Getzlaf was quick to acknowledge previous record holder Selanne:

“Listen, I’m not here to take Teemu’s spot. Teemu did more for Southern California hockey than anyone, I think. I am honored to be part of that and be that with him. There’s no taking over what he did, that’s for sure. Teemu was the face of everything, and Teemu has an ability to embrace that. He had an ability to walk outside the building and stop and talk to every person that went by and he’d stand there for 15 minutes and do it. God bless him. That’s part of his nature and makeup. I’m just extremely honored to be part of that same group and was able to learn some things from him, as well as the other guys I got to follow.”

The goal came at 10:10 of the third period to put  the Ducks up, 3-2. They would  go on to win with one additional empty net goal.  But the assist might well have come earlier. On an Anaheim power play in period one, Getzlaf twice received diagonal zone passes like the ones he is known for dishing to teammates. Once it was to the left of the zone, the second time to the right, just out of the wheelhouse in each case. He also made one  such pass,  just off the mark enough that his teammate didn’t get a shot on the play.

Sounding suspiciously like  a future leader, Terry said this about the goal and  his part in the record: “I forgot that I even scored it. It was so cool for me. As soon as it happened, just to jump into his arms like that, it was a special moment. Selfishly, it was probably one of the coolest moments of my hockey career and something that I’ll remember forever.”

Will this team record be broken? Corey Perry, sitting third, is still playing, but not for Anaheim, obviously, and even if he were, his point total is 776 as of now. Cam Fowler, Rickard Rakell, and Jacob Silfverberg are all with the Ducks right now, but their points totals are 331, 315, and 296. In other words, Getzlaf will have been basking in the afterglow of his career for a while before any of them will challenge.

Coach Dallas  Eakins  provided some perspective on the event:

“It’s interesting, everybody comes off the bench. It’s something I talked to some of our leadership guys about, our vets about, I think it was [Adam] Henrique that brought it up going, you know what, maybe we shouldn’t come off the bench because he’ll be mortified. Then we decided, even better reason to do it. It’s amazing these moments like this, you go through your whole career as a player, I think about my personal experience, you go through as a player, then as a coach, and moments like this are few and far between. You’re only going to maybe get a handful of them if you’re lucky. To have the privilege to be his teammate, or privilege to work beside him, or privilege to be one of his coaches, it’s an incredible night for everyone.”

The Ducks won the game 4-2 with two power plays on six opportunities. They allowed one power play goal against. They had a slight edge in shots, 26-25.

Cedric Paquette was called for a minor, a major, and a game misconduct for boarding Trevor Zegras in period one. Zegras played 12:12 in the game.

The Ducks were not playing with Rakell, a week-to-week injury situation, and Silfverberg, in Covid protocol. They recalled Sam Carrick from the AHL, and he got the empty net goal.