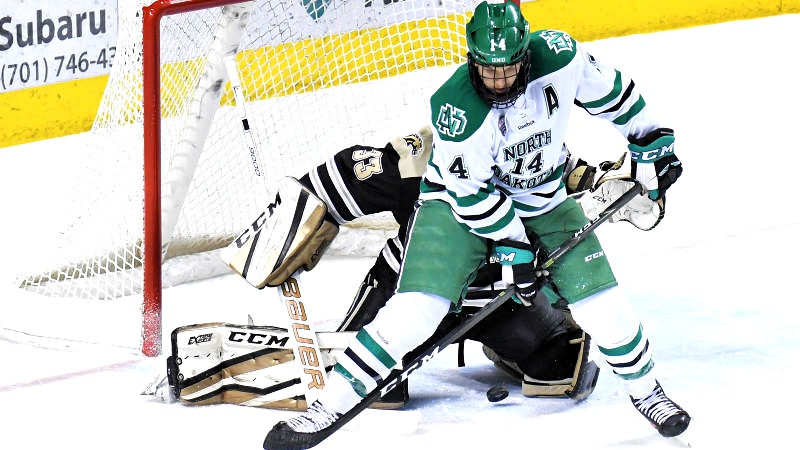 After the famous eastern programs played in front of their home fans, the Air Force Academy and Western Michigan did battle on the rink at the Dunkin Donuts Center. The crowd was smaller, but the goals were aplenty, the action was fast, the hits fierce, and the caliber of play may well have topped the Friars and Crimson earlier game.

The western opponents came in looking to move on and face Harvard for the regional final. The expectation from many was for it to be a physical, low-scoring game. The physical part was accurate, the low scoring part was not.

Air Force came out on the early strike, getting a putback goal from Jordan Himley only 56 seconds into the game to take a 1-0 lead. Western Michigan controlled the pace for much of the next ten minutes, outshooting the Falcons 7-4 for that time. Shane Starrett stonewalled the Broncos the whole way, including on the penalty kill. Air Force came into the game with the best penalty kill in the country, killing 89.9% of man advantages.

The Falcons showed that again tonight, killing a holding and a cross-checking penalty. The latter saw Kyle Haak force a turnover off Taylor Fleming’s stick, drive it the other way, and score the team’s eighth shorthanded goal of the season. Western Michigan did get a goal back when Frederik Tiffels scored to make it a 2-1 game at the first break.

Air Force completely controlled the second period. They outshot the Broncos 17-5, dished out hard hits, and dictated the pace of the period. They had plenty of chances, but Ben Blacker stood his ground in the Western Michigan net, trying to keep his team in the game. He could not stop every puck, as Kyle Haak take another turnover and score his second goal of the night.

When the curtain fell on the second period, Air Force looked dominant and was one period away from the second NCAA victory in program history.

At the start of the third period, Air Force kept up the attack, seemingly closing out the game with 16:02 left to play. Hugh McGing was called for an elbowing penalty. Seven seconds later, Phil Boje scored to make the score 4-1.

Air Force looked like they had the game in hand. But Western Michigan had no quit in them. Fifty seconds after the Boje goal, Griffen Molino scored to cut the lead down to two. 23 seconds later, Sheldon Dries scored his 16th goal of the season to cut the lead down to one. Air Force had to respond. They did. Tyler Ledford scored 1:34 after the Dries goal to make the score 5-3.

The Broncos kept attacking, outshooting the Falcons 13-5 in the third period. With three minutes left, the Broncos pulled their goaltender to get an extra skater and it worked. Frederik Tiffels put in his second goal of the game to cut the lead to 5-4 with 1:59 to play.

The Broncos couldn’t get the equalizer. The Broncos Wade Allison was called for a charging penalty and a game misconduct penalty in the last 1:13, and the Broncos could not get the fifth goal. Air Force held on to win the game 5-4.

Frank Serratore was happy and lively after the game. Kyle Haak and Jordan Himley praised the leadership of the team for steadying the bench when Western Michigan made their rally late in the game. Serratore gave his normal entertaining quips about the game and was proud of the way his team carried momentum from the Atlantic Hockey Tournament into the regional tournament.