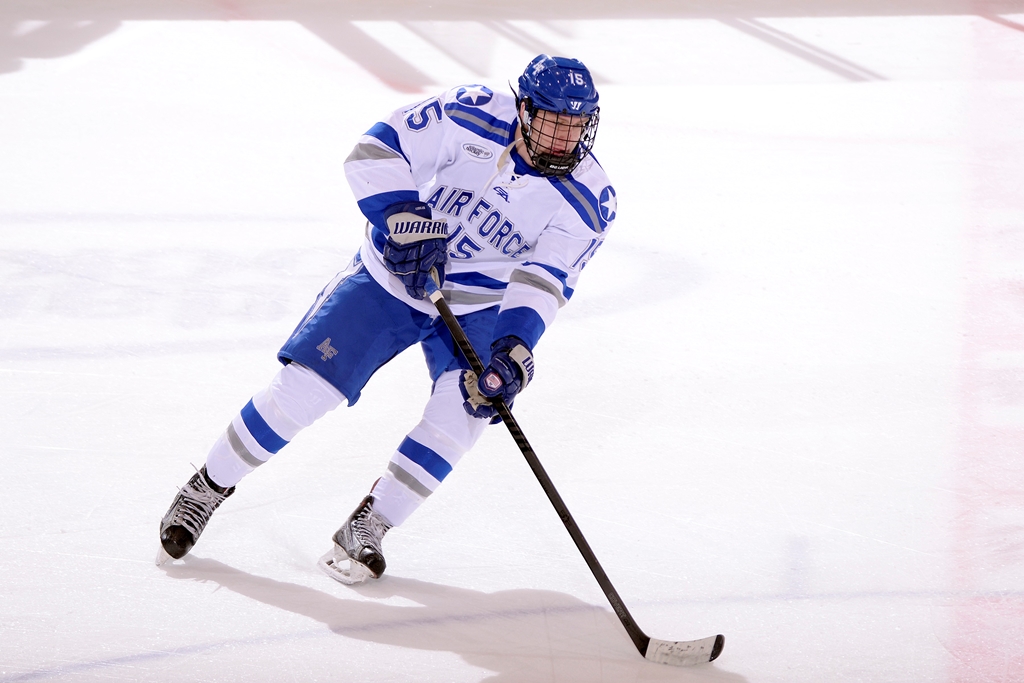 The Air Force Academy went on a surprising run to the East Regional Final in 2017. They went into the offseason with the promise of an improved unit and another championship pursuit.

Then the offseason saw star goaltender Shane Starrett depart to sign with the Edmonton Oilers and be assigned to the Wichita Thunder of the WCHL. The road has only been harder since.

The early season has been spent adjusting to a new regular goalie, Billy Christopolous, and dealing with injuries to Dylan Abood, Brady Tomlak, and other star forwards. As a result, the Falcons have struggled in the opening stages of the season, going 6-6-3 overall and 2-5-2 in conference play going into Sunday.

The Falcons traveled to Bridgeport, CT, to take on the Sacred Heart University Pioneers and try to get some needed league points at the Webster Bank Arena.

They got one point after a disappointing tie on Saturday night and looked for two more on Sunday afternoon. Unfortunately, the Pioneers came out of the gates looking to take down the Falcons. Austin McIlmurray scored his fourth of the season near the midway point of the first period and the Pioneers blanked the Falcons, outshooting them 12-11 and goaltender Nathan Perry saving every shot that came his way.

The second period looked even worse for the Falcons. Matt Tugnutt scored less than two minutes into the period and Air Force was on the ropes. Sacred Heart totaled seven shots in the first three minutes of the period while Air Force had one. To make matters worse, Kyle Mackey took a hitting from behind penalty at 2:46, and the Pioneers looked for an early kill shot.

At that moment, Air Force responded. Jordan Himley killed time off the penalty and drove the puck to the Pioneer goal crease, dished it to Jonathan Kopacka, and the senior got Air Force on the board with a shorthanded goal .39 seconds later, the Falcons turned a killed penalty into a two-man rush on the goalie that ended with a Matt Serratore goal.

The onslaught continued when Austin McIlmurray and Kory Kennedy were called for roughing and cross-checking minors respectively. Sacred Heart killed the first penalty, but Kennedy was in the box when Evan Giesler beat Perry for the third goal of the period and a 3-2 Air Force lead.

The Falcons offense, which entered the game second to last in the Atlantic, continued their surge less than a minute into the final period. Evan Giesler got his second of the game and gave Air Force a 4-2 lead.

Just after the halfway point of the period, Erich Jaeger put in a goal off a rebound and extended the lead to 5-2. Sacred Heart did not quit. They attacked Christopolous and Vito Bavaro got his team-leading eighth goal of the season and cut the lead to 5-3. They did not get closer, as Air Force’s stick checking kept the Pioneers to only six shots getting on goal in the frame.

Air Force closed out the game and won 5-3, getting three out of four possible conference points and moving up a spot in the standings.

Sacred Heart falls to 3-9-2 overall and 1-6-2 in the Atlantic Hockey conference, losing desperately needed conference points. The Pioneers hit the road for two games in Erie, PA, against Mercyhurst College. Puck drops at 7:05 PM on both Friday and Saturday against the Lakers at the Mercyhurst Ice Arena.

Evan Giesler scored the third multi-goal game of his career. “We consider last night a bad tie. The way we came out tonight speaks to the kind of character we’ve got in that locker room. We got pucks to the net and won the battles needed to win a hockey game today.”Head Coach Frank Serratore was pleased with his team’s resolve. “The hardest thing in hockey is to turn a game. That game was all going for Sacred Heart. Then we have to kill a penalty and we get two goals out of it. I always say to the boys; if you aspire to win championships, there’s two attributes you must possess: the ability to come from behind and the ability to win on the road. We did both today.”

The Falcons rise to 7-6-1 and 3-5-1 in the Atlantic Hockey conference. Christopolous has established himself as the starting goaltender and has the confidence of his teammates after a 24 save performance today. The Falcons continue to climb the Atlantic Hockey standings and are now ahead of Mercyhurst and one point behind Bently.

As important pieces like Abood and Tomlak come back after Christmas, the Falcons will be a hard team to beat. They return home to face conference foe Niagra University. Puck drops at the Cadet Ice Arena at 7:05 PM and 5:05 PM Mountain Time on Friday and Saturday night respectively.