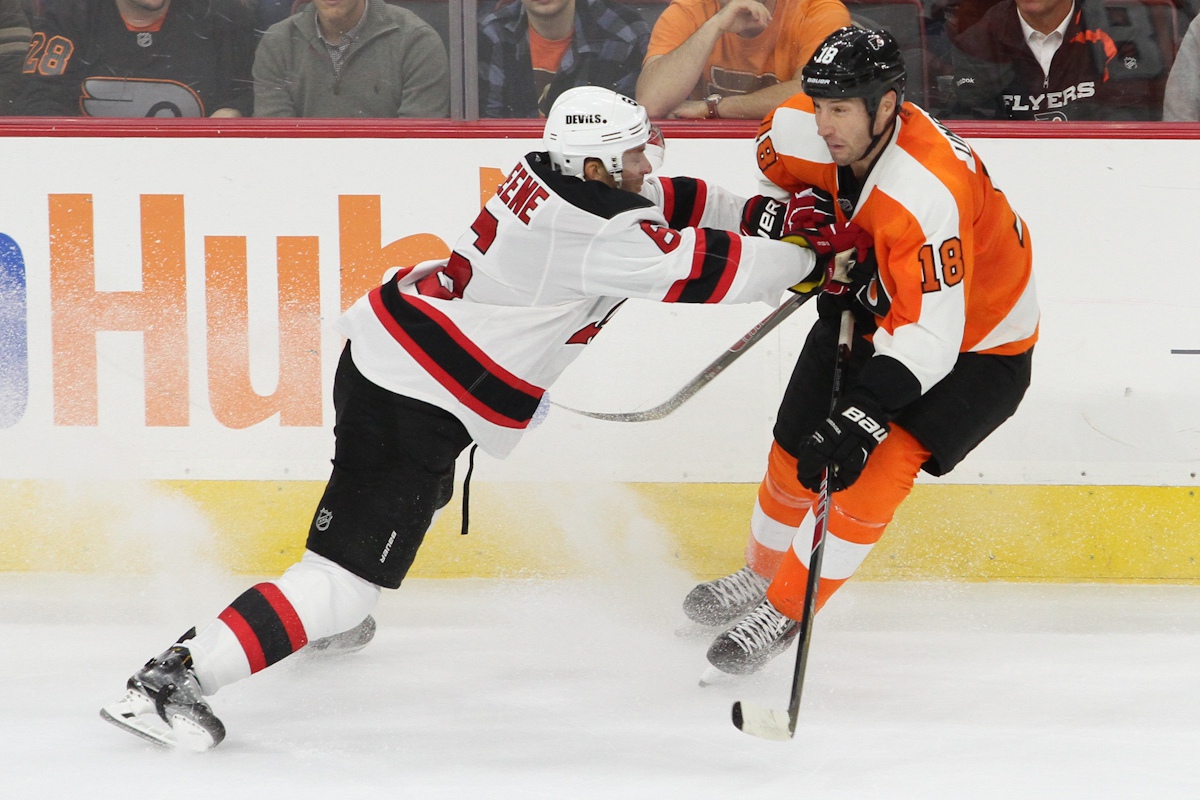 Defenseman Andy Greene (#6) of the New Jersey Devils puts the brakes on Center R.J. Umberger (#18) of the Philadelphia Flyers

NEWARK, N.J. – New Jersey native Kenny Agostino skates to Calgary’s bench after the National Anthem. He grabs his water bottle, takes a sip, sprinkles some water on his back and takes a few more drinks before putting it back on the bench.

He skates across Calgary’s zone towards the penalty boxes, stretching his arms and his legs. Agostino has skated on the ice at The Rock before, several times as a Delbarton hockey player winning state championships and again with Yale.

With 1:34 minutes left in the second period, TJ Brodie creates a turnover in Calgary’s defensive end. He brings the puck up the ice and slips it to Agostino as the Flames cross into New Jersey’s zone. Agostino creates some space for a lone shot in front of Cory Schneider.

Schneider makes the save, and Agostino’s momentum propels him softly into the boards. But just before Agostino took the shot, Jon Merrill swung his stick at Agostino, giving Calgary a power play.

The Flames scored the only goal of the game on that power play.

Five months ago, Agostino was in the same Prudential Center near the visiting locker room, but he was putting on his gear for reigning National Champion Yale’s season opener.

“You don’t ever really think that far in advance,” Agostino says with a smile after a 1-0 Flames win. “But it was a dream to someday hopefully play an NHL game in this place.

The Flanders, N.J., native grew up a Rangers fan. He played for Delbarton hockey for three years, where he skated at the Prudential Center and won three non-public state championships. While with Delbarton, Agostino finished with 261 points.

“It’s very special,” Agostino says. “This is ice that I’m a little familiar on, playing my state championship games here and the [Liberty Hockey Invitational] tournament earlier this year.”

As a member of the Yale Bulldogs, Agostino was a part of a team that won the National Championship in 2013. After the win, he elected to stay with Yale for another season. He finished his career with 132 points, which ranks ninth all-time in Yale history.

“It was a thrill for all of us to see Kenny playing against the Devils,” Shatel said. “He played a lot of minutes and he played very well.”

In his first NHL game at the Prudential Center, Agostino finished with 11:54 ice time, two shots, one hit and one block.

The forward signed an Entry Level Contract with Calgary on March 17, after his senior season with Yale ended. He joined the team and played his first game on March 21. He scored his first goal on April 4 against Florida.

“I’m just learning every day how to be a pro, on and off the ice, taking care of your body,” Agostino says. “Every rep in practice matters and of course every shift in every game matters. You never know what shifts going to be a big one and you just got to capitalize on your opportunities.”

Agostino darts in and out of the visiting locker room at The Rock, putting together his gear before Calgary’s flight takes off. He smiles and pauses to talk to reporters about playing an NHL game at home.

“There were a lot of people, too many to count,” Agostino says. “I’m lucky to have that many friends and family come cheer for me.”

When Agostino skated out for warmups, a group from Yale sat behind the net in Calgary’s end. They wore Flames shirts with Agostino’s name and number on the back, and cheered when he took his first shot on net.

“A couple have texted me pictures of them,” Agostino says. “I thought that was awesome.”

Both of Agostino’s brothers were at the game, and they caught up with one of Agostino’s former Delbarton hockey teammates and current Princeton hockey defensemen Tommy Davis during the second intermission. They were talking right out

Another one of Agostino’s former Delbarton teammates, Princeton netminder Colton Phinney, was also at The Rock — where he won state championships with Agostino and Davis.

“It’s special when you get to play in your home state in front of close friends and family,” Agostino says.