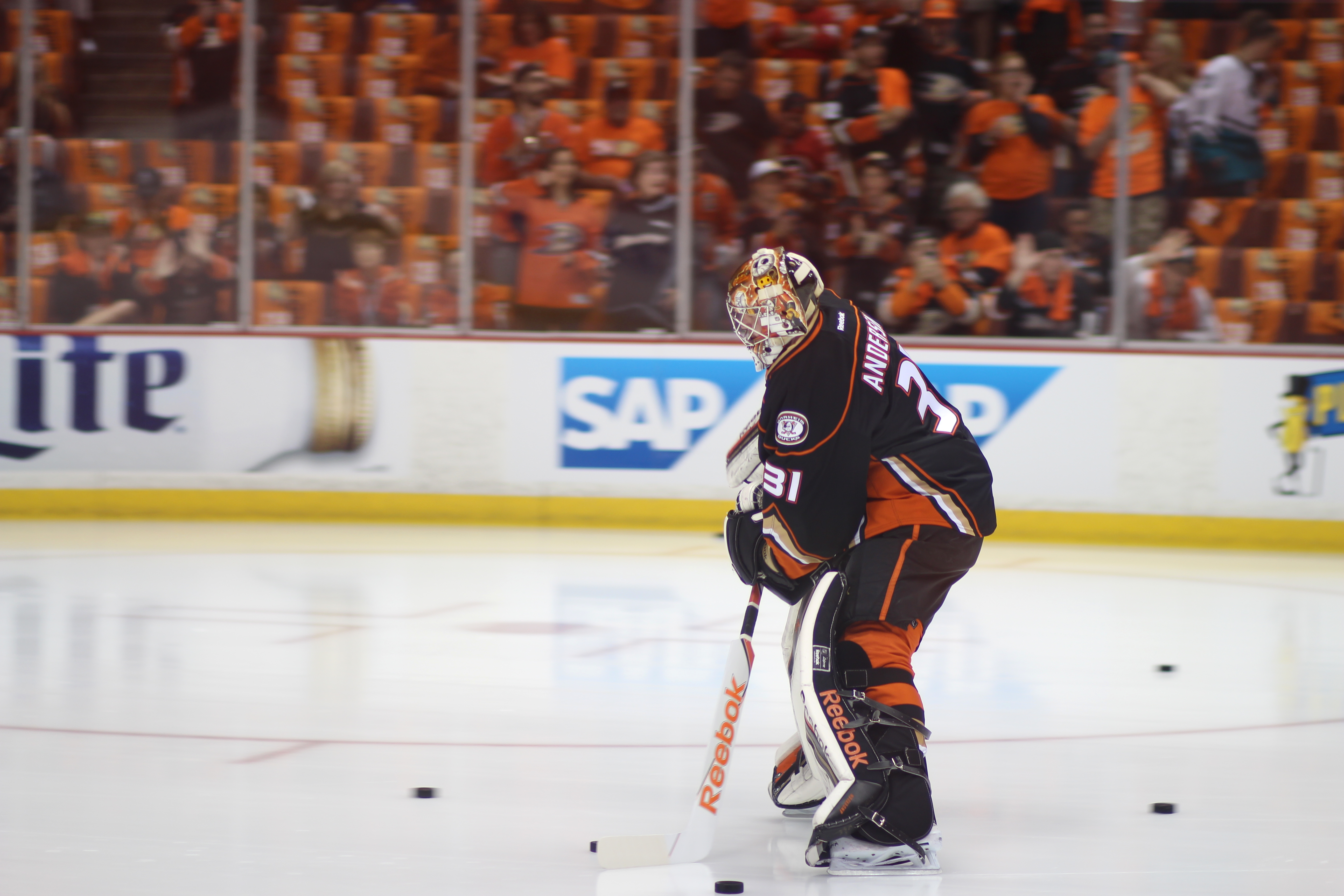 A World of What-ifs

“Don’t live in the world of what if,” my mother used to say. I was a worrier, and the more speculation I could entertain about what might happen, the happier I was. Her advice sought to rescue me from myself, and she was right. But just for a moment, I’m going to practice my bad habits as I muse about the upcoming Anaheim-Chicago series.

What if Anaheim’s goaltending breaks down?

At the start of the playoffs, the question was who. Andersen? Gibson? And how would Boudreau decide? He’s notorious for panicking in the post-season, flipping goalies, and losing.

That temptation was taken from him when Gibson got hurt on April 11th and the only logical thing was to put Andersen in as main man, with Jason Labarbera on the bench to back up. Andersen seized the moment, and his numbers have been great. To this point, he’s got a 1.96 GAA and a save percentage of .925. And there’s no sign that he’ll stop. Watchers cite his performance in the playoffs last year as a learning experience, the test he needed to go through before he could win. Now’s the time to win.

But if he falters, what then?

Part of the Anaheim game plan is to be aggressive on defense, or rather, with their defense. Against Calgary, for instance, there were many times when Beauchemin was seen down in the corner of the offensive zone or in front of the net. Early in game five, Cam Fowler cruised behind the opposing net, gliding backwards in hopes that he could circle the cage and get a pass on the far side. When they do this, there’s someone covering the point, usually, but obviously a forward on D is just a stopgap, and partly the risk is acceptable if the last line of defense, the netminder, can come up with a spectacular save now and again. Andersen’s done that in the few instances he’s had to, but he hasn’t been severely tested. What happens when he is? Well, we’re right back where we started here, aren’t we?

These things remain to be seen. Let’s move to the other side of the ice, Chicago.

What if Chicago’s defense can’t take the hard minutes?

Their top four play insane minutes. Duncan Keith is getting around thirty, and Hjalmarsson, Seabrook, and Oduya are running around 25. But Roscival is now out, and Kimmo Timonen seems to be on the bench more to open the door for others than to play himself. He got just eight minutes in the last game versus the Wild, and in the game before that, less than six.

So who will play for Rozsival, and can this squad handle all these minutes? It would seem that the longer the series goes, the more this factor would favor the Ducks. Add to that the fact that most people think that this series will be the more intense (read nasty) of the two currently going on, and this might be where Chicago breaks down if these guys take a lot of pounding early.

What if the Hawks are less able to contain the Ducks’ snipers than they have been able to earlier this season?

Chicago won two of three games, both by 4-1 scores. The one the Ducks won turned out 1-0. So the plan, whatever it has been, has worked. But the Ducks are a more balanced team than they were before they really came together, and the Hawks have not seen them since the wintertime (January 30th, to be precise). Their plan is steady defense that always has them on the right side of the puck. But the Ducks have managed to get behind every defense they’ve faced in the latter part of the season and so far in the playoffs. It’s a product of their speed and their long, some would say risky, diagonal passing game. They love to throw the puck off the boards in a “V” pattern and get behind the D that way also. This works especially well in Anaheim, which has lively (and very odd) boards. This could be the Chicago team’s undoing.

What happens if Joel Quenneville suddenly loses his coaching mojo?

Not going to happen. The guy has it all over Boudreau in the “been there, done that” category. He can’t take full advantage in Anaheim, with the home team having last change, but he can script things when they go back to Chicago, and he’s unlikely to make a mistake in doing that. Look for Kane and Toews to be kept away from Kesler’s line, and you’ve got one of the keys to the Blackhawks winning.

Further, Quenneville has already shown this playoff that he’s decisive enough to yank a goalie when it’s necessary to do so. The numbers in the Hawks’ net so far are weak with a GAA for Crawford of 2.60 and Darling 2.21 and save percentages of .936 and .916 respectively but the point here is that when Darling faltered, the coach had no trouble pulling him. He’d do the same thing with players in other positions if he needed to.

Patrick Kane’s shot, which is the fastest, most tricky release in the league. Ryan Kesler’s ability on faceoffs, which has him at 63.7% going into the series. The Ducks’ depth of scoring, and the scoring they’re getting from their blueline.

There’s a lot to like about this series, and lots of reason why either team might win. In any case, this might be a more closely fought and intense set of games than even the Stanley Cup final will be.