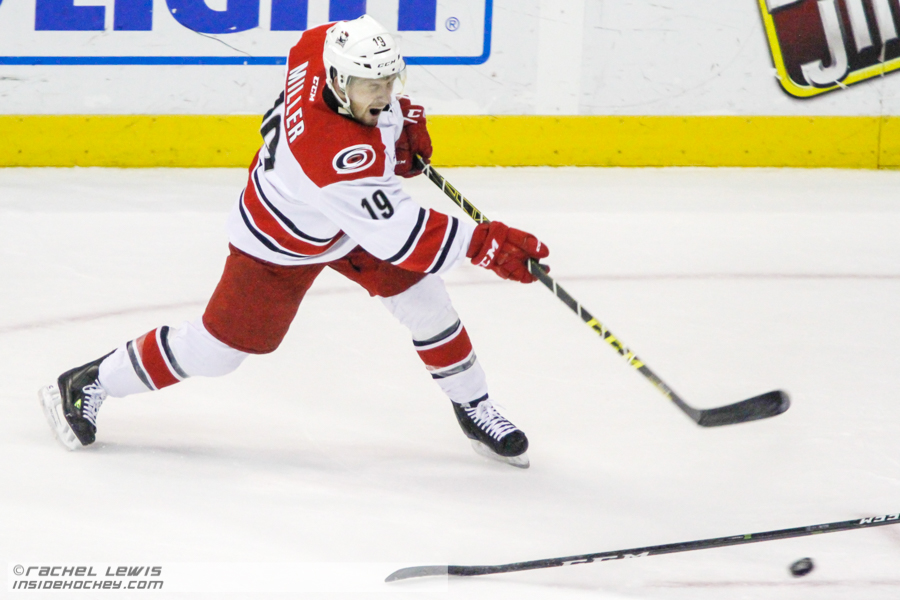 Andrew Miller (CHA - 19) takes a shot on net that results in a goal.

Since the 1930s, people have been playing professional ice hockey in England. It took Inside Hockey until now to decide to post someone to cover the finals of the current league, the Elite Ice Hockey League, formed in 2003. Actually, the fact that I am going to be covering the PredictorBet POFW (Playoff Finals Weekend) is more a happy accident than anything. I just happen to be in England now, and I planned it a few weeks ago to head up to Nottingham for this four-team tournament. Why?

It’s hockey. And I thought you might be interested. What sort of hockey and how much you’re interested is what I am anxious to find out. The EIHL is the highest level of professional competition in the UK. The teams are actually from four countries: England, Scotland, Wales, and Northern Ireland. Three conferences make up the organizational scheme.

Are there foreign players in the league? Yes. They’re called “imports,” and the league limits the number of them, or else what you’d have here is a league that I’m guessing would be one below the ECHL; that is to say, professional but made up mostly of players who aren’t going anywhere in particular in the sport. Fourteen imports max can be dressed for any Elite League team.

As it is, the competition is kept keen by the fact that the clubs are bound to recruit a certain number of English players rather than just buying the most expensive foreigners.

What am I expecting of the quality of the play? Well, about a dozen years ago, I went to a game in England, played by the Oxford City Stars. At the time, that team, was, if I recall correctly, part of the British National League. Of late, they have been relegated to a lower level regional league. In 2004, they played a wildly offensive game.  In just a moment, I’ll tell you about how they play now. The comparison will be illuminating.

I wrote about the experience of seeing British hockey in Growing Up Hockey, if this is sounding a little bit familiar to you. The game was raucous. No offensive measure was spared. And no defensive schemes were attempted. The score was something like 8-5, and that, I got the impression, was pretty much what happened all the time. It was more of less 1980s hockey if the North American comparison were to be made

I got the feeling that the action was more due to the lack of coaching than the lack of talent. Rushing the puck and shooting on net takes no plan. Defensive schemes do. Maybe it was a lack of practice time. Maybe a lack of systems. Good thing. Systems are boring, and the players who play best in them are not entertaining to watch.

I saw the Oxford team play again a couple of weeks ago. Things were entirely different. There was lots of skill, but also a tighter sense of the game’s defensive demands. It wasn’t entirely schematized like some NHL hockey is, but it was tighter than in the past. They didn’t do much offensive cycling, but the defense was solid, with players staying in position and marking their opposite numbers. It made for a much better-balanced game that just rush-rush-rush. It was quite entertaining.

If there was one big difference from the NHL game, aside from the fact that the shots weren’t as hard, it was that the hits weren’t, either. There wasn’t the fear that can limit an offensive player’s creativity. Again, it’s harder to develop a defenseman than someone who plays offense up the middle, and so rushing was still in evidence, but the chances were much more tightly controlled. The players looked universally confident. The game was good, and the skating fast.

I imagine that this weekend’s games will be similar, but right now, this is all a big guess. I’ve done some reading, but the online presence of the league is scanty, especially compared to the absolute flood of information available about the NHL. And despite the fact that the Championship game will appear on TV, nothing much has been said about this event in the news, or the papers, so far as my investigations show.

If nothing else, the event will be a study in game presentation. Like at football games here, the arena will be segregated as to where fans sit. Supporters of teams sit in massive groups. If my prior experience, including attending professional hockey and football games in the UK, is anything to go by, the place will ring with songs that team supporters belt out without the prompting of anyone on the organ or the sound system. It’s scripted, in a sense, but in the very best way, because it comes from the heart and ties in to the ritual of spectating that people love.

The teams in contention are the Nottingham Panthers, Cardiff Devils, Belfast Giants, and Guildford Flames. The Panthers are playing the Devils in the semi and the Giants the Flames. That means that the possibility exists for a Flames-Devils final. I say that only to tease those of you who might at first read that thinking of the NHL equivalent.

Anyhow, to get to this point, these four teams emerged from a field of eight of 11 in the league), who played each other in two-games, total goals format to get down to four squads. These series were home-and-home affairs, with the higher-seeded team (one played eight, etc.) choosing whether to have its home contest first or second. Nottingham is not in the Finals Weekend, by the way, simply as the home team. They are there on merit. The site was selected by the league long ago, and thus the playoffs are like the US SuperBowl—not dependent on who happens to make it in a given year.

The higher-seeded team is the one with home advantage in any given game during the weekend, with geography not playing into it.

The EIHL  is the number one indoor professional spectator sport in England, and the third-most attended winter sport overall, with football and rugby union being the two who take the higher position.

Teams play 60 regular season games, with the League Champion being the team that gets the most regular-season points. Three Conference Champions are also crowned, with a trophy being presented. The trophies represent historical figures in professional hockey, including the Gardiner Trophy, for Charlie Gardner, a Scotland-born goalie who played for Chicago and led the Blackhawks to the Stanley Cup in 1934.

There’s history and tradition here, then, that most (nearly all, practically nearly everyone) North American fans have no idea about.

There’s spectacle, which I expect to supersede that of the scripted participation in US-Canada pro sorts.

And there’s hockey. The quality of that will be intimately described to you, by me, over the course of the weekend. I’m hoping it’s blockbuster in its intrigue, hard in its hitting, excellent in its goaltending, organized in its coaching.