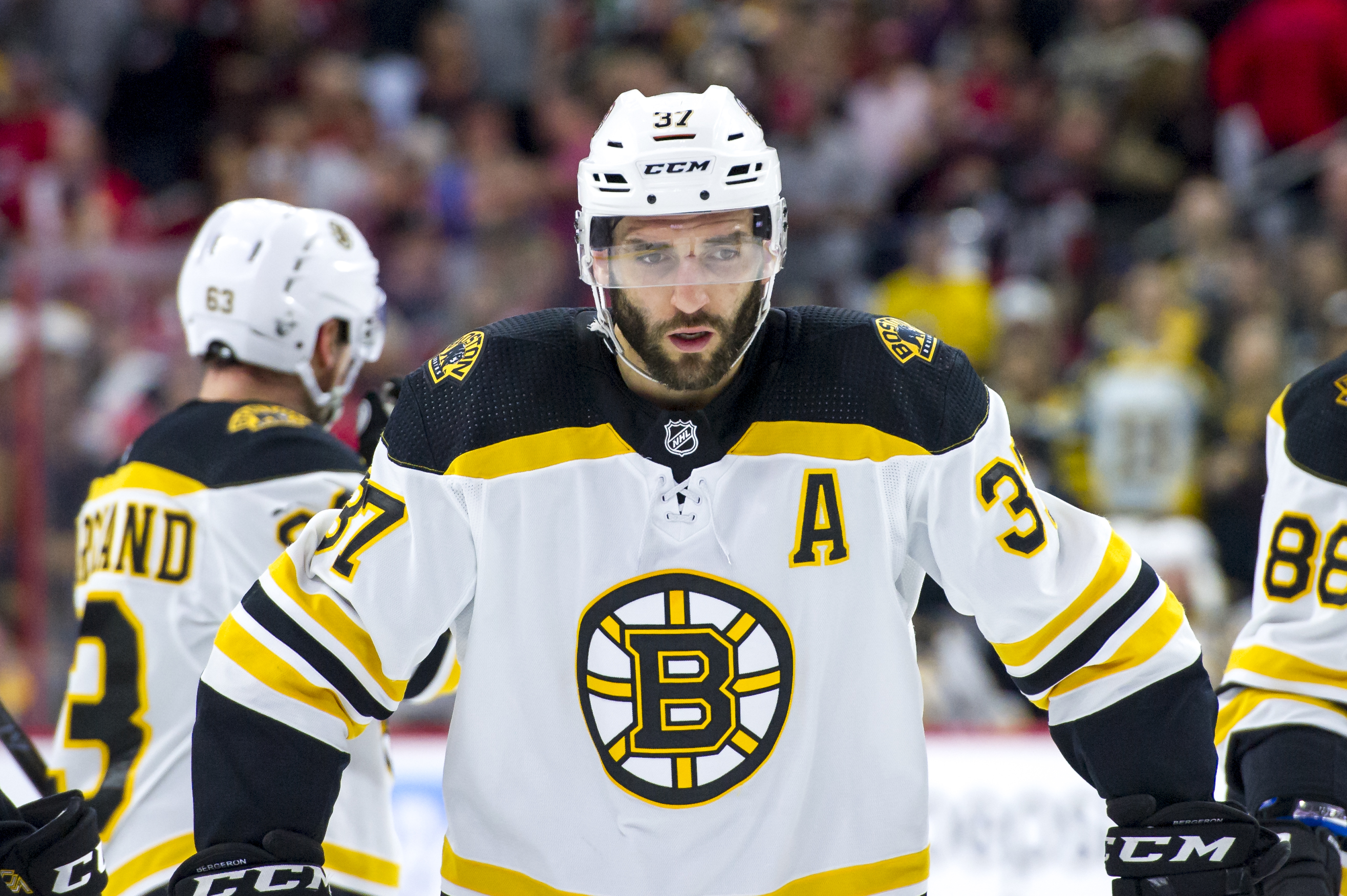 Boston Bruins forward, Patrice Bergeron (37), lines up for the face off during the first period of Game Four in the Eastern Conference Finals between the Boston Bruins and the Carolina Hurricanes in the 2019 Stanley Cup Playoffs on May 16, 2019.

A Few Words With Patrice Bergeron

Q: What stands out about the Blues and how do you beat them?

PATRICE BERGERON:  They’re a team that’s really good on the forecheck, they turn the puck over a lot. I think we have to be smart in taking care of the puck. When we do and keep things simple, we get out of our zone and that helps going forward. I think the north-south kind of game is a lot more of what we need to do in this series.

Q: What makes Vladimir Tarasenko a difficult player to contain?

PATRICE BERGERON: Well, I think he’s got obviously a great shot. They’re making plays, playing well as a line. He uses his speed well. He finds ways to get away from I guess coverage, to get open, finds ways to get that puck. Once he does have it, it doesn’t stay long on his stick.

Q: A you impressed with Sean Kuraly’s ability to score clutch goals…

PATRICE BERGERON:  He’s been doing it all year. That line got us going, obviously and got us that game-winner. We are a team that has relied on everybody all year and Game 1  was another great example.

Q: This has turned into a very physical series. Is that what you were expecting? Do you feel like the Bruins need to match the physicality?

PATRICE BERGERON:  It’s what we expected. We’ve seen it against Columbus a little bit, and Carolina was also a physical team. Nothing that we’re not used to. Yes, we have to respond and play a physical game. When you move the puck quickly, it’s a lot harder.

Q: The Sharks ended their series in St. Louis, they thought that the Blues had taken out some of their players. Did you come into the series with any discussion of keeping your heads up a little bit more, whether or not the Sharks were right, that you have to be that much more careful because of the physicality?

PATRICE BERGERON: I mean, it’s obviously something that we talk about. It’s Playoff hockey. We all know that you fight for every inch, every puck battle, whatnot. Nothing that we weren’t expecting is happening in the last two games. I think we’ve been handling it well this whole Playoff run, we got to keep going.

Q: With your line struggling how important has it been to get across the board secondary scoring?

PATRICE BERGERON: I think that’s how you get to this point. It’s by relying on everybody. The way we’ve been successful is by everybody chipping in and doing the job on any given night. It’s only two games obviously, we’re going to look at some video tomorrow and be ready for game 2.

Q: Coach Cassidy mentioned that he expects that your line will probably have their best game in Game 3. He said last night was not your best game. What do you have to do to make sure that his words won’t fall on deaf ears?

PATRICE BERGERON: I think we obviously have to respond from last night. It’s always about what’s in front of you. Whatever is behind is in the past. You have no control over it. I think when a game like that happens, you look at what you can improve, get better, and go back to what you know is successful for your team and you individually. That’s all. You just have to go out there and play your style, just worry about what we can really control.

PATRICE BERGERON: I think they’re a really good line. They play well together, good at forechecking, turning pucks over. We need to capitalize. For us, it’s about being better. We’ve dealt with this the whole Playoffs against different lines. It’s no different. We know how we can play. It’s about taking care of the puck in our zone.

Q: You talk about finding the areas you want to be better. Have you identified them yet?

PATRICE BERGERON: I think to execute a little better in our zone. I think it starts there. Then, yeah, a lot of unforced errors last night. I think we have to play a little bit more our way, our style.

Q: How does it feel to be tied 1-1 as the series moves to St. Louis

PATRICE BERGERON:   We know it’s going to be electric. There’s a buzz here in St. Louis right now, on their team. No different than how it was here in Boston. We’ve been through it before. I think for some of the young guys, Carolina was very loud, it was a loud building, not necessarily easy to play in. I think it’s always about simplifying your game and taking it not a shift at a time, but a period at a time. I think the first goal is always huge in the game. We know St. Louis likes to start strong. It’s about worrying about what you can control, how you play.  We’re only a quarter of the way there. We know they’re going to come out even stronger for Game 3, so we have to be ready for that.