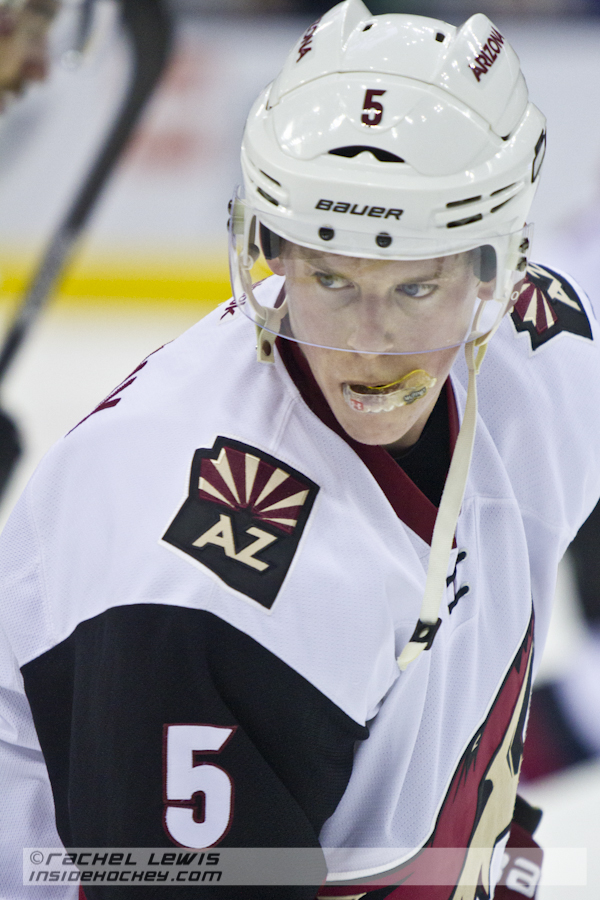 A Bittersweet Win and a Lot of What-Ifs

Around this time last season the Phoenix Coyotes were unsure if they would be playing their final home games in the desert. They were also fighting for one of the final playoff spots before they were eliminated with just two regular season games to go in the shortened 2012-2013 season. This year it was all deja-vu with a little twist. With about seven games remaining the Coyotes had a chance to control their own destiny. They were five points ahead of the Dallas Stars for the final wild card spot and just a point behind the Minnesota Wild, whom they played for a chance to take over one of the top wild card spots.

Since that Minnesota game, the Coyotes not only forgot how to win, they also forgot how to score. Before the final game of the regular season against Dallas the Coyotes only managed seven goals in six games. With its poor scoring game huge gaps with chances in the net, being outshot tremendously and having enormous shooting droughts. Thomas Greiss, who took over for the injured Mike Smith, felt the pain his top goaltender went through from being dented by so many shots his defense would allow. Too many injuries also plagued the squad, especially near the end of the year watching most of the first and second line taking most of the hits. With all that combined, the Stars kept winning, and it only took less than a week for them to leapfrog and steal the last wildcard spot.

“We have been pretty good all year,” left winger Mikkel Boedker said. “The games we were leading by, especially in two goal games, we needed to find ways to close out. Losing our last few games down the stretch hurts and it piled up on us.”

Sunday’s game would have been a great chance to give its hopeful fans something to cheer for. Instead, it turned into a meaningless game that just under half of the arena’s capacity witnessed. Phoenix closed out the season 1-3-3, and all that they could have done was frustrating to witness. The final game of the season, in which the Coyotes were able to win over Dallas 2-1, would have been a game in which had playoff implications. Instead it was a victory that ended a bittersweet season.

“It’s obviously nice to win,” right winger Dave Moss said, who scored the game winning goal. “Every year after a season like this you look back and think of five to ten games off the top of your head where you had leads and you weren’t able to hold on. It’s unfortunate, but when you are one of those teams that are close it hurts.”

“Looking at this team, there is no way that we should have been out of the running,” captain Shane Doan said. “We had a lot of solid output from everyone, but we needed to find ways to score goals. We had a lot of close games and you always think things through.”

Many Coyotes fans though can note a lot of the negative they had to swallow at the end of the regular season. But in all reality, a lot of the fans can agree that they would rather stress over fighting to keep their season alive rather than being in limbo to think that they had witness their very last Coyote game. Anthony LeBlanc, the Coyotes co-owner, had done its job to make sure that the team was to make a deal with the city of Glendale and give it at least five more years to make profit. They still finished last in attendance, but the team had managed to keep its average attendance over 13,000 for the second year in a row. More concerts popped up in the arena, and Westgate Center has looked more alive with new restaurants and entertainment centers. Even with a missed chance at making the playoffs, the owners had done all that they could to produce new life to a city that was about to kick them to the curb but in all reality desperately needed them.

This season did finish with a lot of what-ifs. Take for example the butt goal in Buffalo and the phantom goal in Toronto that cost them at least two points. What about failing to do its job in the third period giving up leads and losing 13 times? Losing Shane Doan to the mysterious Rocky Mountain Fever gave the team another huge blow, but to allow the team to say it was a complete dissapointment is not real fitting. This will be the first season in many that the Coyotes can panic about personnel, fixing up their roster, and making big time moves without worrying if they will be dressing in Sedona Red for another year.

“It’s been a long time for it to happen,” long time Coyote Doan said. “I’m real excited to know that we are away from not having to deal with that.”

Still, the Phoenix fan base is very picky, and it is spread out to all of its professional teams. Take for example the Arizona Cardinals, a team that historically is one of the worst professional franchises. Back in 1999, the Cardinals at the time were the only team to share a venue with a college team. On the verge of moving to most likely Los Angeles, the county was able to narrowly vote on building a stadium solely for them. Its fan base grew for the first few years, but it has them since fluctuated even with a small Super Bowl run in 2008. The Phoenix Suns and Arizona Diamondbacks have also had its shares of recent frustration, and even their loyal fans have slowly dwindled. Sure there are times in which their arenas see hikes in attendance, but usually it comes from their opposing teams, especially from teams coming from Los Angeles.

Phoenix is safe after this season, but its contingent on what they do in the offseason in order to get over the hump that plagued the end of their campaign. There will be a lot of rebuilding and the team has a lot of potential to improve, but now the team has a lot more time to be serious about what needs to change to make sure that these mistakes become minimal.

“The way I look at it we have some real good young players coming,” Tippett said. “We are going to do a lot of reevaluation over the summer to see what players from our affiliates can play at our level, take a look at any free agents who we may want to re-sign. As an organization, you look at all aspects at how you want to get better.”