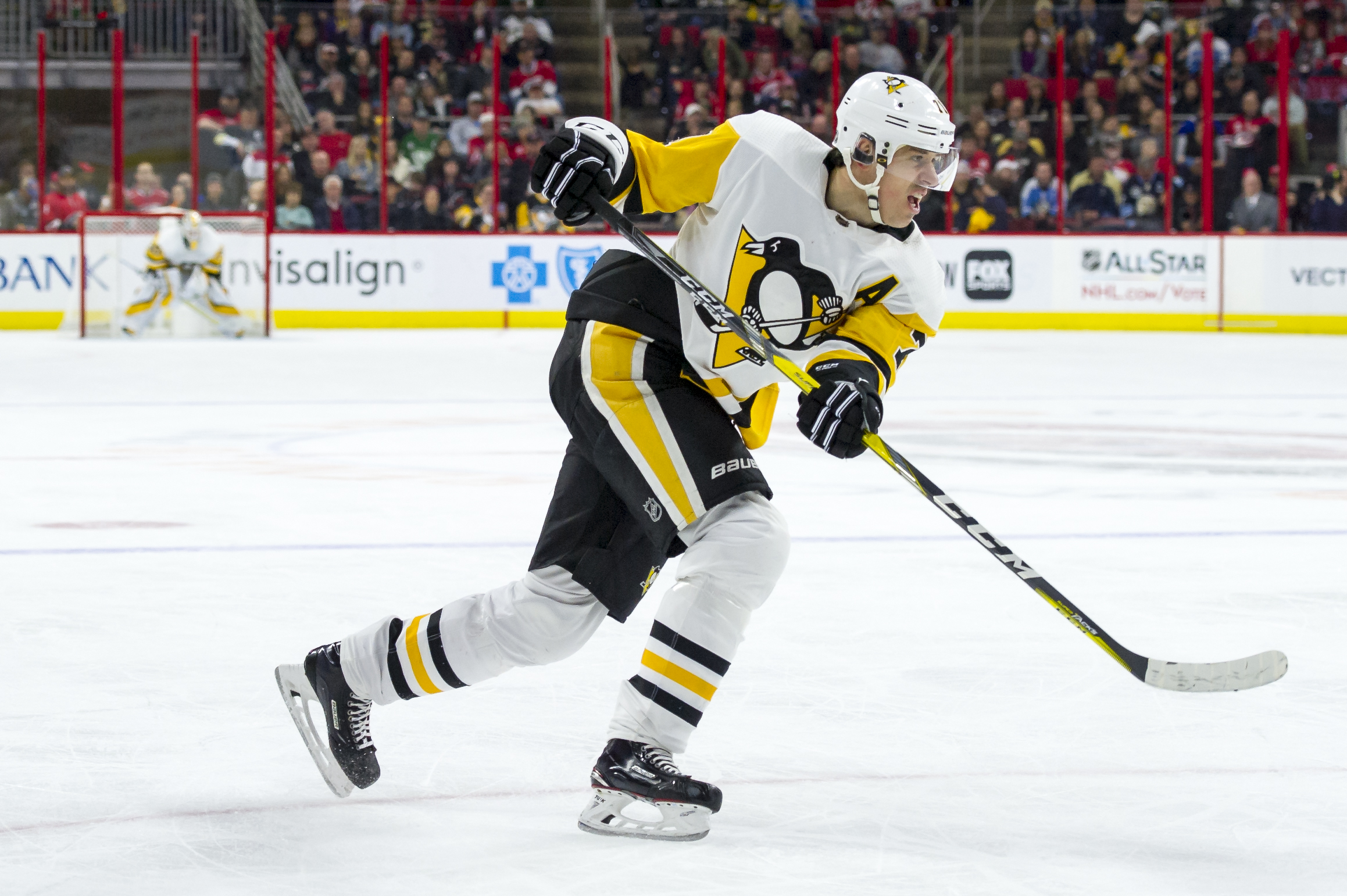 No easy test, the Pittsburgh Penguins. Not with you-know-who  (Evgeni Malkin)  back in the lineup for the first time this year, and especially not when that same person scores two of four goals and almost gets an empty net marker to complete the hat trick.  He completed his domination by adding an assist to the two goals, by the way. Not bad for a season’s debut after having undergone knee surgery last summer.

That was pretty much the story of the Anaheim Ducks’ night on Tuesday  with the Pens in town. And the visitors dominated by outshooting the Ducks, 34-26, and scoring four goals while allowing only one goal themselves. Note that this might have had something to do with the fact that the Ducks were playing their fourth game in six nights. Or maybe Pittsburgh  is back. Yep, that’s it. The recent ten-game win streak was not out of character in the least, and especially could be repeated because Mr. Malkin is strapping on the skates once more.

The first  goal on the night came from Jeff Carter, his tenth of the year. But it was set up by the shot of Evgeni Malkin that went off goalie Stolarz’s glove just prior. The puck made its way back to the slot off Getzlaf’s stick and was stripped from Troy  Terry at the faceoff dot and winged  into the  net.

This was all the scoring in the first period. Say that another way: the beast had not awakened yet, though the eyeball test had Malkin well in on the play. Carter’s goal came with just over a  minute gone, probably not the way Dallas Eakins would have wanted his club to start given the potent weapons on the other side. The Pens outshot the  Ducks in period  one by a 16-7 advantage.  Their first shot was perhaps the best test, a pass from Milano to Terry right down the slot that Tristan Jarry stopped.

He would do it again, on Rakell, with about a minute gone in period two and the Ducks on the PP. This set it up  for Malkin to make the game 2-0 with 3:23 gone in period two, a  power play goal that was  enabled by Crosby standing right in front  of Stolarz and jumping out of the way  last second as the puck went past a sight-deprived goalie.

Before the end of that twenty  minutes, Jakob Silfverberg had potted his second of the season, assisted by the ever-hot Sony Milano (16 assists so far this year). So it was 2-1 with about half the game gone. Not good enough for Malkin, who got his second with about five minutes to go in the second. He  had earlier set up Crosby for  a one-timer that Stolarz  had to move way  to his left to get. What kinds of weapons are these guys? (Let’s just say that Three Mile Island was not the only nuclear power in that state.)

Carter would eventually pot an empty net goal to seal the game, this with 17:03 remaining, leading one to demand a confession: Where is the fountain of youth? There’s a secret in Pennsylvania somewhere, and it’s high time it was revealed.  That goal, by the  way, could have been Malkin’s, but he passed to Carter, who had the marginally better angle to the empty net.

So what  else do  the stats reveal? The Penguins won almost two thirds of the faceoffs. They went 1/3 on the PP (the second goal) while the Ducks  didn’t score on  three such chances. The Ducks blocked twice as many shots, 18, as the Pens, 9. But read that back and it saysless about the  Ducks  and more about the potent frequency of the Penguins’ attack.

And the eye test? Crosby, despite being a highlight reel all night, was never better than when he batted a rebound out of mid-air right in front of Stolarz, who swallowed it up. This Pens team has  all kinds of mad skill, as is evident from their recent 10-game winning surge.

Malkin was the obvious first star  of the game,  with Silfverberg  second and Carter third.

For the Ducks, Cam Fowler kept up his  scorching pace with nearly 28 minutes on the  ice while no forward dominated icetime particularly. Getzlaf, in his second game back from Covid Protocol, had just over 19 minutes. He took on minor penalty.

The Ducks now have two road games on consecutive nights, two games at home next week, and then a brutal Eastern/Canadian road trip.

The Penguins  play  LA, San Jose, and Vegas with a night  in between each before they get home for one against Ottawa and then another short road trip to Columbus.