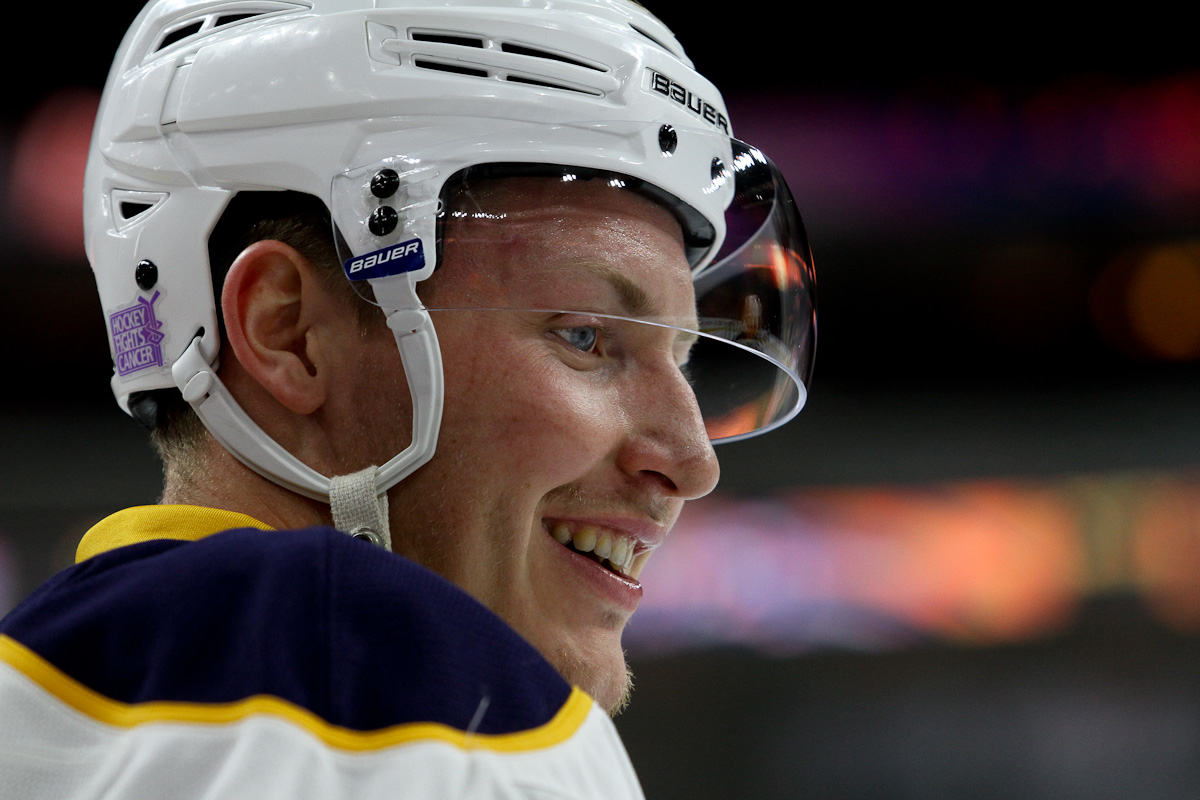 Nick Deslauriers when he was with Buffalo

The plan for the Ducks this year was simple: consolidate their lineup by seeing which youngsters were ready for the NHL, and keep working the Dallas Eakins way of playing hockey, which started, actually, off the ice with the personal touch of getting to know each player’s home life before considering where he fit into the lineup.

Throw that out the window with two, one-goal games in the last two games played, because when it’s that tight, nothing matters but the win. Monday night, the Ducks played their home opener, reprising a 2-1 OT loss on Saturday with a 1-0 win, this one at Honda Center versus Minnesota. The prior two games, that 2-1 loss and a 5-2 spanking to open the season, had both come on the road in Las Vegas.

Going in to Monday night with the Wild in town, the team had one point to show for four possible, a disappointing loss after blowing a 1-0 shutout by John Gibson late in the third period  against the Golden Knights. Their fortunes reversed fast  in that game, as they got scored on with 1:22 left, and they lost the  OT at the seven-second mark.

So what would they do with the  Minnesota Wild in town, themselves charged up by two OT wins over the LA Kings last week?

They would scrape out a win on the back of yet another excellent goaltending performance by Gibson which Coach Eakins described by saying,  “He just looks so calm and so square and so big in the net. I just think when a goalie’s playing well, he makes big saves look really easy, and that’s what he looked like tonight. He’s faced a lot of work here early.” No kidding. The team has been peppered 29-22, 33-22, and now 34-27.

Eakins summarized with an understatement: “He’s been excellent.”

He—Gibson—is almost all alone, because nothing about the Ducks’ offense has been encouraging, and Eakins knows it. He didn’t hide his worry, either.

At the same time, the old cliché is that you don’t critique a win, and the coach saw the good side in the team finally coming through with two points. “At least on the goal there, we’ve talked about the importance of that driver, going through the net. He puts pressure on the goalie and he opens up seams, and so even though it was only one, we’ll take it,” Eakins said.

The lone goal for either side was a long time coming, landing when about four minutes had passed in the third period. Nicolas Deslauriers scored it on a redirect off a pass by Kevin Shattenkirk, who carried the puck down the boards on a rush.

Stretching back to last season, that gives Deslauriers four goals over the last five games, because he came off a hat trick near the end of last year, part of a seven-goal campaign in 59  games.

Delsauriers is neither by a superstar nor a youngster, but a fourth-line guy, who in the old days would have been there for his fighting skills. Oh wait, that’s largely why  he is there now. Good thing he brought a bit of offense, then, especially when those expected to do it—Rakell, Henrique, Getzlaf, and up-and-comers like Troy Terry and Sam Steel—are not doing it. The Ducks have but four goals  in three games. This marker was preceded by three by Max Comtois, the  only other Ducks player with any  goals at all.

This was the 20thshutout of Gibson’s career. It must be noted, however, that the strategy of “score one goal and trust Gibson to get a shutout” is one that can’t work forever.

Monday, the team’s downside aside from scoring was too much penalty taking, though the PK survived five penalties with kills. The Ducks had been fairly disciplined prior to this, getting just a couple of minors in the first two games. The cross-town Kings, by contrast, had had 11 penalties (22 minutes) in two games to open the season versus Minnesota.

Looking to the Ducks’ back line, defenseman Kevin Shattenkirk notched 29:08, and Hampus LIndholm got 29:07. Cam Fowler played a little less than 20 minutes. Josh Manson suffered an upper-body injury and did not return to the game after playing just over six minutes.

The Wild outshot the Ducks 34-27 and failed to score on the PP. They were also outdone in a couple of other statistical categories including faceoffs (Ducks 53%), hits (Ducks 26-21), and blocks (Ducks 15-7).

Monday’s game with the Wild in Anaheim started at the unprecedented hour (for a weeknight) of 6pm in SoCal.  The teams now rest a day or so and go back at it on Wednesday, also at the unusual starting time of 6pm, but since nobody’s allowed in the building, does the time matter?

Brian Kennedy is a credentialed NHL media member and a  member of the Professional Hockey  Writers Association. During the pandemic, he is reporting from his SoCal home with assistance from team- and NHL-supplied media information.