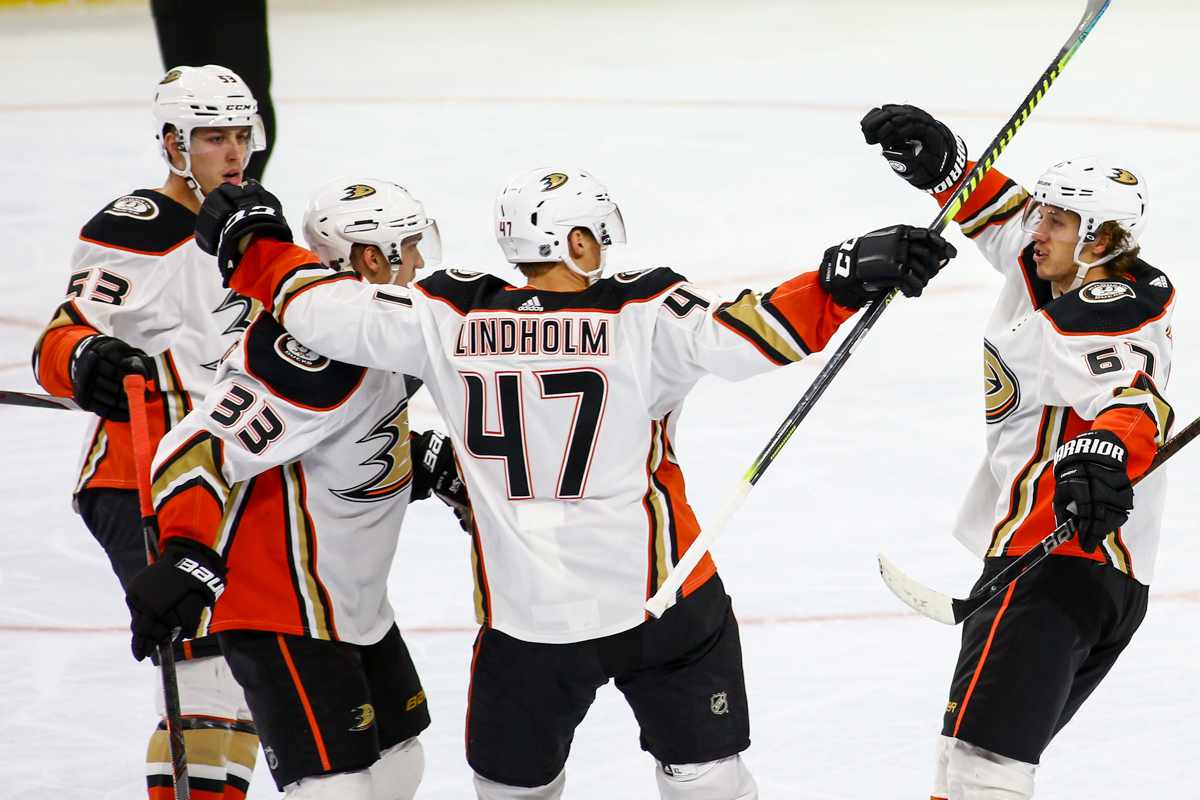 (Stock) Max Comtois #53, Jakob Silfverberg #33, Hampus Lindholm #47, and Rickard Rakell #67 of the Anaheim Ducks celebrate after scoring a goal against the Philadelphia Flyers

This season is going to look like this: win one, lose one. All the talk of rivalries and series is going to come down to a lot of .500 hockey  as teams split  series with opponents, nullifying the  supposed “four-point games”.

Only  minor proof is available thus far, it is true, but  witness what happened to the two SoCal teams tonight (Sunday) for evidence. The Ducks took Arizona 3-1 and the Kings defeated the St. Louis Blues by  a 6-3 margin. This puts LA and Anaheim, not to mention in-state rival San Jose, at precisely  .500, despite all the  worrying and wrangling that has gone into the first 10 days of the season. Colorado, by the way, is also .500, standing directly above those three Cali teams in the overall rankings in the West.  Out front of the Division—Vegas, with surprise Minnesota in second and St. Louis in third. But the points spread is 10-8-7 amongst them and then 6’s across the board for Colorado down to San Jose and then 5 for Arizona. In other  words, most teams are exactly  in stasis.

The Ducks  entered the night having taken Colorado to OT on Friday in Anaheim. They lost that game 3-2. Sunday for a  5pm start, they  ripped an early  goal, Henrique winning a faceoff and Silfverberg scoring on a  surprise launch of the puck up and over goalie Philipp Grubaur.  This was at 58  seconds. They padded that lead midway through the  game when Rakell scored at 9:05 of period two.

In the meantime, it was John Gibson highlight-reel time, as he moved from side to side in the net to defeat a number of Colorado tries. Midway through the game, the shots were 17-8 in favor of the Avalanche. They would end 33-15 (you read that right), a pathetic number for Anaheim but a  tally that  didn’t matter with Gibson’s fortress-like play.  That total came on a tally of just one SOG in period three.

Colorado didn’t record their goal until there were about five minutes left in the third, and Anaheim got a third goal to seal it at 3-1 with 1:40 left in the game. That was Lindholm’s second of the year, into an empty net.

If you’re reading that right, you’ll see that all the people who need to be on the scoresheet  were—aside from goal scorers Silfverberg and Rakell, who each  notched their first of the  year,  Lindholm got one from the  blueline and assists went to Henrique ad Getzlaf, amongst others.

Rakell said after, “I’m kind of relieved to get that first goal out of the way, and I’m going to try  to help  our team win.” He also noted that his Captain and linemate on this night, Getzlaf, is “still one of the best passers in the game.” Getzlaf has assists in the past two games. That line, the first, is  Rakell, Getzlaf, and Max Jones. Jones played  just  10:52, which is not so surprising when  you see Getzlaf’s number: 10:58. The  offensive leader in ice time was Henrique at 14:30.

The unlikely leader of Anaheim in scoring points is Carter Rowney, with four assists.  Max Comtois has three  goals, matched with no helpers.

Coach Eakins said that after Rakell’s goal, he went down to the player on the bench and said, “See, you can still score.” The nervous laugh after he said this was intended for—irony?  He added, “But any time players like that can score a goal it is just a massive weight lifted off their shoulders, and they carry it because they care, and they carry  it because there’s an expectation there. We’re real glad to see those guys score.”

John Gibson was once again stellar in net, recording 32 saves for the Ducks.  Good thing, because the team has fewer goals by far than any other  team in the West. Anaheim has scored 11 times. The next lowest total of goals is 17, held by St. Louis and  Arizona. LA leads the West (yes, this is a weird year) with 20, but they’ve also given up 20 goals, to rest at even in goal differential.

Eakins was also clear in his praise for Lindholm. “This kid wasn’t fooling around. He was training super hard and very  efficiently” on the long break the team just had, not making the playoffs. “He wants to get better everyday, and it’s paying off with his play. He has been really, really  good  here the last few games. It’s great when you see a young man with that much confidence. He closes so quickly, and he’s physical.”

Good perspective, but what  matters is the big picture: the Ducks grabbed three of four possible points versus AZ, and they have points in four of their last five games. Of their play Sunday evening, Coach Dallas Eakins said, “There were times when we got hemmed in by [Arizona’s] skill, but the guys stayed positive through it. I liked the energy, the chatter on the bench. I thought we were physical at the right times, and obviously our goaltender was excellent.”

The Ducks now head to Arizona for two games, Tuesday and Thursday, before returning home to host the Blues.

Brian Kennedy is a member of the PHWA and a credentialed NHL media member. For the duration of the pandemic, he  is reporting on Ducks and  Kings hockey  from his home in SoCal using NHL-supplied media information.